With his solo band Ellefson, Megadeth founding member and bassist David Ellefson, has more of an opportunity to show off his wide range of influences and musical interests.

Although he has spent some of the 2000s branching out from Megadeth with other musical ventures like Altitudes and Attitudes, and even some non-music related like his Ellefson Coffee Company, he continues to be the bassist of the Thrash Metal icons.

After a Grammy Award winning career that has now spanned four decades, and despite his already busy schedule, in 2019 he released his first solo album under the Ellefson banner. Titled ‘Sleeping Giants’, it provided a variety of sounds both old school and modern, mixing his Thrash Metal roots with more modern Rock sensibilities, and even on one track, Hip Hop.

On the latest project from Ellefson, a covers album titled ‘No Cover’, he lets it be known where a lot of this variety comes from, with a varied tracklist of Metal and Hard Rock influences that the band covers with overall enthusiasm and passion.

The album is packed with 19 tracks and a great abundance of guest artists. Ellefson, rounded out by vocalist Thom Hazeart, drummer Paolo Caridi and guitarists Andy Martongelli and Ron ‘Bumblefoot’ Thal, are joined by countless guests, many of them Metal legends in their own right.

The album opens with a fury of fun in the form of Judas Priest’s ‘Freewheel Burning’. With its uptempo beat, multiple guitar solos and high pitched notes you would expect only from Rob Halford himself, it is a slab of old school Metal at it’s finest and the performance is perfectly executed.

To show off the variety of bands covered, this is followed by tracks that were originally recorded by Twisted Sister, Motorhead, Dead Kennedys and Billy Idol.

While none of these other opening tracks match the excellence of ‘Freewheel Burning’, that is less indicative of the quality of those songs and more that the Judas Priest cover is a true album highlight; it is truly the perfect opener.

Other album highlights include the first single, ‘Auf Weiderhesen’ (Cheap Trick) as well as ‘Sheer Heart Attack’ (Queen) and ‘Over The Mountain’ (Ozzy Osbourne).

‘Auf Weiderhesen’ (featuring guests Al Jourgensen and Charlie Benante) is placed at about the halfway point of the album and is filled with high energy and makes for a great sing along, complete with gang style vocals.

‘Sheer Heart Attack’, featuring guest vocals from Doro Pesch, captures the Punk Rock energy of the Queen original, while Ellefson manages to add on to it by beefing up it’s overall sonic attack.

Over The Mountain” (featuring MetalTalk favourite Andrew Freeman and Jimmy Degrasso) sounds as timeless as the original, while simultaneously sounding new and fresh, as if the performance by Ellefson provides a little extra in the way of energy and heaviness.

Each track on this album closely captures the energy, the arrangements, the tones and production of the originals.

This is not intended to be reimaginings, but rather tributes to the original artists. So while none of the songs covered go in new or unexpected directions, there are a few tracks that may seem surprising to longtime Megadeth fans.

This is primarily the case when the band steers into ballad territory on ‘Love Hurts’ by Nazareth, which in and of itself, is a cover of The Everly Brothers.

While KISS seems like an obvious band to cover, perhaps the classic ballad ‘Beth’, complete with piano and string arrangement, is not the most expected KISS song for Ellefson to record.

On ‘No Cover’, Ellefson delivers an exceptionally impressive collection of cover songs.

The band is not reinventing the wheel, but that is also not the point or even all that expected, as David told MetalTalk recently.

What they do pull off, is a well done tribute to their many varied Metal and Rock influences.

David Ellefson has said that this album came together to help fill time before the release of more original material from the band and that they were hesitant to record given the current global pandemic and lockdown restrictions.

If they are able to bring the same passion, energy and mix of old school and modern sounds to the next batch of Ellefson songs, as they do with this collection of covers, the next Ellefson album promises to be excellent.

As for ‘No Cover’ itself, covers albums are generally hit or miss, depending on the artist involved.

It is evident that the covers chosen here were carefully selected and carefully given attention, making for a fun, energetic release from start to finish.

For those reasons, ‘No Cover’ makes for an excellent tribute to bands and artists that helped pave the way for countless others. 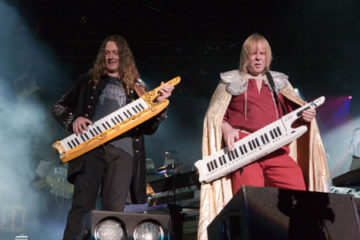