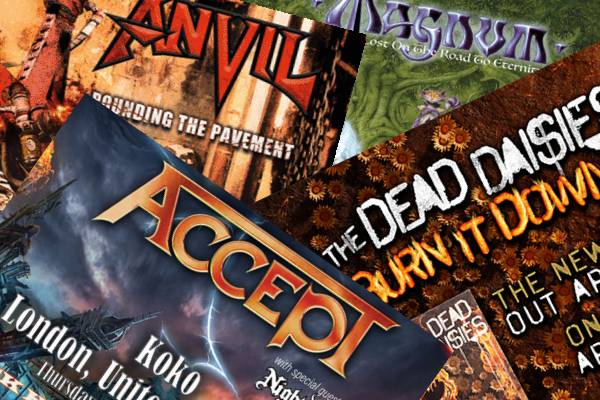 Fuelled by a desire to offer much more than bog-standard internet advertising, our innovative and hugely successful promotional campaigns are individually strategised to deliver our pre-agreed campaign target.

We’re launching our eleventh campaign in two years very soon and we’ve had ten successes out of ten so far, and as well as constantly finding new ways to bring success to your campaign, we’re looking for opportunities to achieve unprecedented results. Getting Magnum’s ‘Live At The Symphony Hall’ a number two UK Album Chart position was good but we want a number one.

Here’s the seven elements of a MetalTalk promo package:
1. Banner adverts. Your banners will occupy all ad space on the site; no other banners will appear for the duration of the campaign.
2. Your logo in our social media headers, prominently.
3. Extra editorial. Extra interviews, video interviews, written articles and audio delights too. This is where we get ultra-creative.
4. Competitions. The bigger the prize, the better the publicity.
5. Extra social media posts. As required to keep you permanently prominent in all our feeds.

Here’s the list of the full campaigns we have managed so far:

The Dead Daisies, May 2017
Our very first full campaign was for The Dead Daisies’ live album, ‘Live And Louder’. The aim was to achieve a Top 40 UK Chart position in the regular chart and Top 20 in the Rock Chart. The album landed at numbers 32 and ten respectively.

FuXK RoXk, July 2017
American clothing company FuXk RoxK wanted to increase their UK presence and were delighted with the increase in sales and profile our campaign delivered.

Magnum and Anvil, January 2018
A joint campaign for SPV/Steamhammer with the aim of delivering a Top 20 album for Magnum and a debut chart entry for Anvil. Magnum’s ‘Lost On The Road To Eternity’ charted at number five in the UK and Anvil did indeed hit the charts for the first time in their long history with ‘Pounding The Pavement’.

Accept, February 2018
Accept’s ‘The Rise Of Chaos’ World Tour took several months to reach England but our campaign made sure the Metal Heart was beating at a completely sold out Koko in London.

Marco Mendoza, February 2018
The former Whitesnake and Thin Lizzy bass player brought his solo show to the UK and filled venues across the land with no promotion other than our campaign.

The Heretic Order, May 2018
Gaining exposure for a new band was a brand new challenge for us and the ‘Evil Rising’ album sold double the Massacre Records target, with two European tours and prestigious festival appearances following as a result.

Magnum, January 2019
No live album ever charts as high as number two, unless it’s Magnum’s ‘Live At The Symphony Hall’ backed up by the power of a MetalTalk promo campaign.

D_Drive, May 2019
Japanese instrumental sensations and Marshall Records signing D_Drive arrived in the UK in June as a completely unknown act in this country but left with a healthy following and burgeoning reputation to build on.

Whitechapel, Late 2021
As Whitechapel released their latest album Kin, backed by some promotional work from MetalTalk. The album charted in the main iTunes US chart at number eight, reaching number 39 in the UK version.

Contact us and let’s talk about your forthcoming campaign. We’re very serious about adding a number one album to our record.