This special sold out event was organised as a farewell party for original Iron Maiden singer Paul Mario Day, at the conclusion of what may be his final visit to the UK having emigrated to Australia in 1986.

It developed into a full blown celebration of the very early years of Iron Maiden.

Paul may have only been a member of the band for less than a year, but it’s clear that his effortlessly strong voice set the benchmark for all those that followed. Even now, his voice still combines the raw resonance and edge of Di’Anno and the range and power of Dickinson.

Hosted at the The Cart And Horses in London’s east end where the tentative first line-up of the band that continues to troop its indelible colours across the globe first performed in early 1976, the day was a euphoric, emotional and hard rocking triumph.

From the moment that eager fans swung open the saloon doors to secure the best vantage point to the climactic finale, when a raucous version of ‘Wrathchild’ blew them clean off their hinges, this was a wonderful celebration for Metalheads, Eddiephiles and Maidenites alike.

Paul’s UK visit may have provided the initial impetus for an informal meet and greet, but Sunday’s final event blossomed into a day long celebration of the true legacy of the beast by members of the extended Maiden family tree that each played their small part in the band’s history during the four years before they were signed by EMI in late 1979.

In addition to Paul (vocals: 1976), leading the supporting cast were Doug Sampson (drums: 1978-1979) and Terry Wapram (guitar: 1977-1978), both of whom brought along their respective current bands Airforce and Buffalo Fish, and who delivered spirited sets of original material during the afternoon. 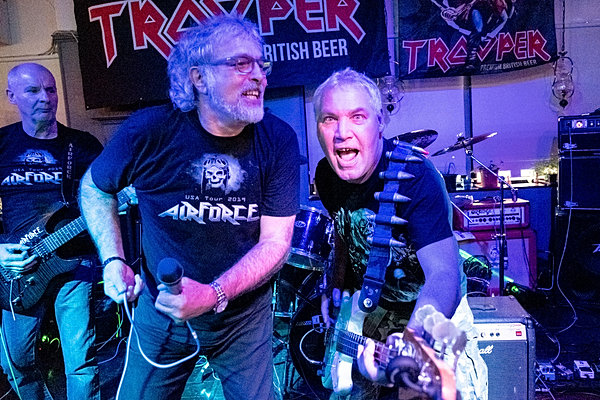 Buffalo Fish were founded by Terry and drummer Pete and expanded to a five-piece in 2013 with the addition of charismatic frontman Rob Stitch, who contributed to their debut album, ‘Raw Bait’, which was released the following year. Paul joined the band for a screaming and vengeful version of ‘Wrathchild’, a song that post-dates his time in Maiden, but that he sang as if it was his signature tune.

Doug Sampson first joined forces with Chop Pitman and Tony Hatton in Airforce in the late eighties after mutual friend Steve Harris suggested percussive pilot Doug join their squadron. Having departed around the turn of the millennium, Airforce remained in the air with various line-ups and Chop the sole original member, until Doug and Tony rejoined in 2016.

The greatest surprise of the whole day was to see Paul joining the band for most of their set, singing a succession of Airforce originals like ‘Fight’, ‘Life Turns To Dust’ and ‘Heroes’ quite brilliantly, as if he’d been singing with the band for years. Equally, ‘Band Of Brothers’, from the event’s commemorative CD single was performed with the power and emotion that the meaningful lyrics demand.

The set closed with a wonderful cover of The Sensational Alex Harvey Band’s ‘Faith Healer’, particularly bittersweet given the sad recent death of great SAHB drummer Ted McKenna. This was followed by a barnstorming, police-bating, stage-shredding version of ‘Breaking The Law’.

The lively Q&A, hosted by Steve ‘Loopy’ Newhouse who was Maiden road crew from 1978 to 1984, fielded wide ranging questions submitted by fans with Paul recalling his ‘salad day’ at Castle Donington in 1981 fronting the band More and the mix of original and cover songs that the initial line-up of Maiden played in 1976.

Most revealingly, this included early versions of songs like ‘Iron Maiden’ and ‘Prowler’, pre-dating the time when Day’s successor, Dennis Willcock, joined the band and further calls into question Wilcock’s recent legal claim for songwriting credit on those songs.​ 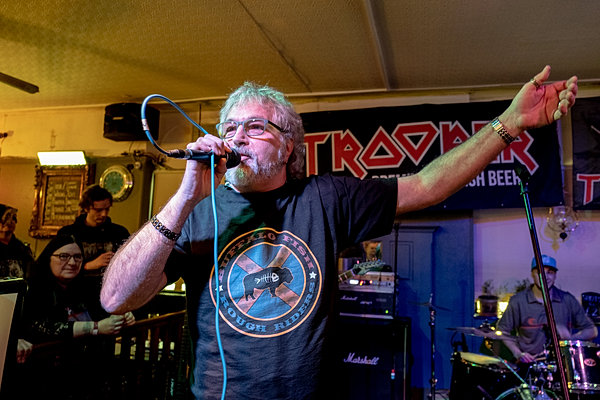 Despite the wonderful bonhomie between all the musicians from their shared history with the band, the theatrical and most definitely absent Willcock is certainly considered the pantomime villain for pursuing legal action against Steve Harris and Dave Murray, based on seemingly tenuous and unsubstantiated claims.

What rankles most is that as soon as the action became public, those who had worked hard with Dennis in the latest version of V1 and on a new album were forced to disassociate themselves from their former colleague, scornful of the allegations and fearful of any possible legal repercussions for themselves.

Given its role in Maiden’s gestation, The Cart has become a hallowed haunt for fans with every inch of its walls covered with memorabilia and images from the band’s history, with pride of place given to a supersized photo from 1976 of the first line-up of the band on the venue’s stage. This included the inaugural guitar duo of Terry Rance and Dave Sullivan with Ron ‘Rebel’ Matthews on drums, alongside frontman Paul and guvnor Steve Harris.

Regular size copies of this photo were just one of the many items of memorabilia on sale which included CDs and vinyl from Maiden family tree bands. Of most interest was probably the vinyl reissue of V1’s ‘Spaceward Super Sessions’.

V1 was the band that Willcock and Wapram formed in 1978 following their respective departures from Iron Maiden and the recording is significant as it features the original V1 demo recordings from that time that were made at Spaceward Studios in Cambridge where the first ever Iron Maiden record, ‘The Soundhouse Tapes’, was created on New Year’s Eve 1978. 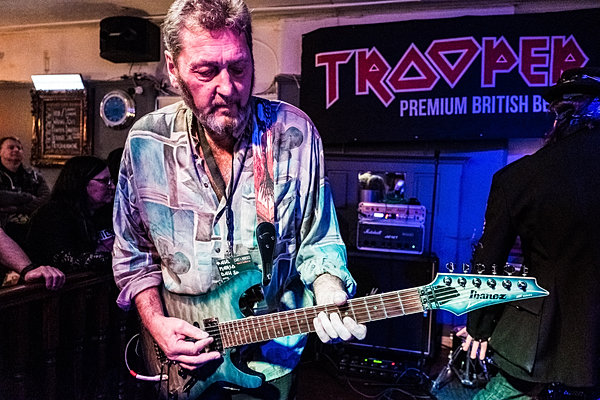 It was a treat for fans not only to meet the elusive Paul Day, but also to have the chance to speak to other Maiden acolytes, including two Terrys and a couple of Daves, in such a convivial and informal environment.

​This included the inimitable Dave ‘Lights’ Beazley, alongside Barry ‘Thunderstick’ Purkis, one of the larger than life characters to have been part of the Maiden story. Dave Lights was a key crew member with the band for over ten years, from the very first days when Maiden used to rehearse at the haunted vicarage where he lived, to his valuable role as stage and lighting designer on every tour until his departure in 1986.

You can see the interview with Dave ‘Lights’ here.

Dave’s post-Maiden career has been no less eventful and the source of many more great stories that we hope someday will be recorded for enlightening posterity in a book, including his time on the ill-fated UFO ‘Walk On Water’ tour and working on events as diverse as the Princess Diana Memorial Concert and Peter Andre’s marriage to Katie ‘Jordan’ Price.

​Most of all Dave reminisced joyfully about his early escapades with fuse wire and gunpowder and the strong emotions of his enduring friendship with Paul.

The day ended in style, in the same way as it had begun, with Buffalo Fish returning to the stage for a second set with a more prog-tinged set of original songs, including the fantastically titled ‘Apache Funk’ and ‘The Otherside’ warming the crowd up nicely for the assault of the senses that was their visceral version of ‘Prowler’.

For this one, Paul generously ceded the stage to Buffalo’s Stitch and Marius Danielsen, a talented Metal musician from Norway, to tag-team vocals on a classy version of the classic track.

PMD then reclaimed the mic for the signature song of ‘Arry’s band, ‘Iron Maiden’, where his blood curdling scream at the end of the song conveyed a heart full of emotion from such a great day. A repeat performance of ‘Wrathchild’, this time with Terry Rance and Dave Sullivan on backing vocals, was the perfect finale of a day that will live long in the memory.

Hallowed be all their names! 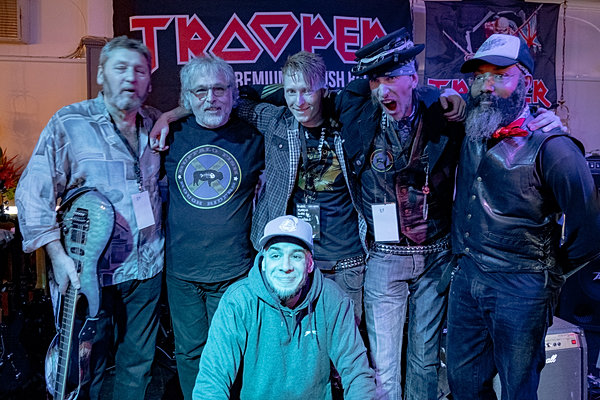 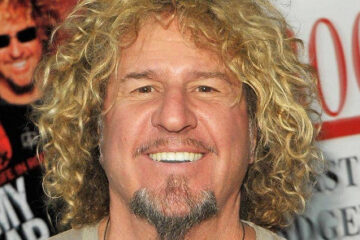