Live is where Metal is truly at it’s best and any Metal band that performs live should eventually have a live album in their catalogue. Autopsy are, for me, all about the live experience, so a good one should encapsulate that vital live essence.

An Autopsy performance focuses predominantly on band main man, drummer/vocalist Chris Reifert. He is the axis around which everything turns, barking and growling maniacally from behind his drum kit and egging the crowd on and ‘Live In Chicago’, the first official live album from Autopsy encapsulates that essence perfectly.

Described by Reifert as “Live, loud, raw and ugly! Autopsy lays waste to the stage and assaults the crowd with classic Death Metal brutality.”

That is a pretty succinct description of what to expect and this album certainly does not disappoint. 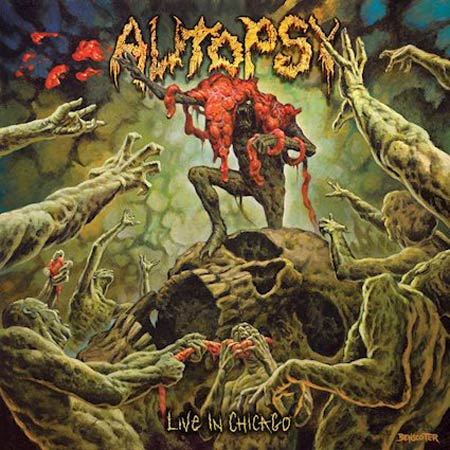 ‘Live In Chicago’ was recorded just before of lockdown on 7th March at Reggie’s Rock Club. Chris Reifert remembers the show fondly: “We feel extremely lucky to have played this show. We got home from the trip and about a week later our home cities were all in lockdown. It was our fourth playing Reggie’s and it is one of our favourite places.

“It was really a perfect trip. The flights were easy, we were all in a great mood, we played with killer bands, ate great food, saw old friends of ours and weed had just become legal in Chicago to boot.

“Plus we love the crowd there. They just want to come down, drink beer and have a kick ass Metal time. The whole trip was a 10 out of 10 for us.

“I’m glad we didn’t know what was coming because that would have definitely dampened the festive atmosphere.”

There is a well varied mix, encompassing their thirty plus year career including:

‘Embalmed’ from their first ‘1987 Demo’ a release which marks the beginning of their aural assault, ‘Charred Remains’ and ‘Critical Madness’ from the 1988 ‘Critical Madness Demo’, ‘Severed Survival’, ‘Disembowel’, ‘Ridden with Disease’, ‘Gasping for Air’, ‘Service for a Vacant Coffin’ and ‘Pagan Saviour’ from 1989’s ‘Severed Surviva’, ‘Twisted Mass of Burnt Decay’, ‘In the Grip of Winter’, ‘Fleshcrawl’ and ‘Torn from the Womb’ from 1991’s ‘Mental Funeral’, ‘Voices‘ from 1992’s ‘Acts of the Unspeakable’.

There are also some modern classics, ‘Arch Cadaver’, from 2013’s ‘The Headless Ritual’, ‘Burial’ from 2014’s ‘Tourniquets, Hacksaws and Graves’, which was also reviewed here on MetalTalk, the Bloodbath cover ‘F**k You!!!’ from 2017’s ‘Puncturing the Grotesque’.

Also, as a teaser for the fans, there is the new, and as yet unreleased track, ‘Maggots in the Mirror’. This is a short sharp, ninety-nine second aural assault which sounded like it was well received. It certainly was by me.

The album is all professionally recorded, thankfully, so a bit of serendipitous foresight there, given our current situation. Mixing is by Adam Munoz, who has worked on Autopsy’s studio albums.

The resulting album really encapsulates the atmosphere and mood of an Autopsy performance well and they are not a beast that is easily harnessed.

It is not too polished in the mixing department. All the vital elements are maintained, including crowd sounds between tracks, but the music is sharp and well delivered.

There is plenty of interaction between Chris and the crowd, with he opens up the proceedings by roaring “We are Autopsy and we play Death f**kin’ METAL!!!!!”, before ripping into the opening number ‘Severed Survival’

All the way through to the closing piece, the cover of Bloodbath’s ‘F**k You!!!’ and in between tracks, Chris makes sure he keeps the crowd in an excited frenzy, but with a performance this vital and exhilarating it is not difficult to do.

‘Live in Chicago’ will be released on CD, a gatefold double vinyl black LP and digitally on 30th October, just in time for Halloween.

This is an essential album for Death Metal and Autopsy fans alike and, sadly, it could be as close as we will get to a gig for a while.