Finnish Melodic Death Metal duo Mors Principium Est, consisting of Ville Viljanen on vocals and Andy Gillion on guitars and programming, return with their seventh studio full length, the aptly but slightly unimaginatively titled ‘Seven’ and whilst the title may be low key the contents are decidedly impressive.

Initially I was afraid I would not like this album, that it would be too cheerful for my naturally morose mindset and given my love of their beautifully bleak and dark 2012 offering ‘….and Death Said Live’, also reviewed by me here on MetalTalk.

The opening track ‘A Day For Redemption’ has a decidedly jolly and light feel to it, but overall ‘Seven’ does not disappoint and where it musically gives an occasional air of cheerfulness, the vocals and lyrics pull everything back into a more sombre context. 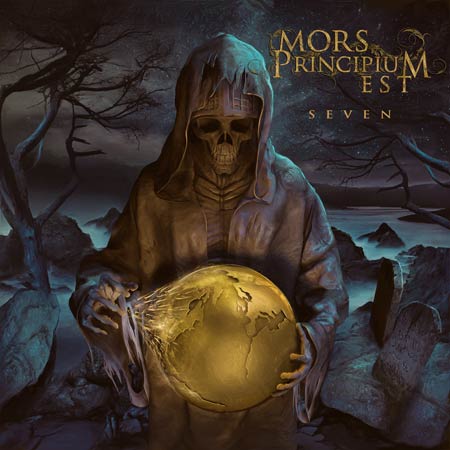 ‘Seven’ is, once again, a well constructed album with well thought out tracks, rasping harsh vocals and with good clarity of content, which is good because there is some wonderfully bleak and dark content in there. The melodies are mostly melancholic and the tracks sparingly orchestrated, just enough to add a sombre mood and the fast and highly technical guitar work is superb.

An impressively engaging listen end to end across the ten tracks, it is forty eight minute in duration. ‘Seven’ has several highpoints which deserve a specific mention; my favourite track ‘Lost In A Starless Aeon’ gives a nod to, for me, one of the best Technical Death Metal bands, Australia’s Psycroptic, with an adaption of one of their famous technical riffs to great effect. It also has the bleak melodic quality of ‘….and Death Said Live’ era.

‘March To War’ also has a Psycroptic slant to the riffing. I love the bleak quality to ‘In Frozen Fields’ and ‘Rebirth’ has a good balance between the up tempo technical side and the slower more sombre elements, with a powerful slow sombre drop midway through.

‘Reverence’ may only be an instrumental, but the careful meld of orchestrations and sombre riffs, make it so much more. There is a magnificently bleak interlude and it is another favourite with me.

There are also some impressive swathes of leadwork, all taking a bleak or melancholic tone. In the second half of ‘Master Of The Dead’, midway through ‘At The Shores Of Silver Sand’ and towards the close of ‘My Home, My Grave’.

‘Seven’ is out on AFM Records on 23 October globally. except in Japan where it is out via Marquee / Avalon.

It is a compelling and accessible listen for all Melodeath fans.

Next year, the Scandinavians will introduce their new material on an extensive tour, together with a cast of top notch live musicians.

Frontman Ville told us: “I am really happy to announce that MPE will join Wolfheart on their European tour in 2021!

“It has been too long since MPE last toured Europe and now we will get to do it with our friends in Wolfheart.

“A great way to return to European venues. Going to be an awesome tour!”