Cello-rockers Apocalyptica have released their brand-new music video, ‘Live Or Die’, featuring Joakim Brodén from Sabaton. One of the most dynamic liaisons in the History of Heavy Metal finds the spellbinding music of Apocalyptica joining with the iconic vocals of Brodén.

In support of their current studio album release, the all-instrumental ‘Cell-0’, Apocalyptica are soon to embark on a large tour of North America, before European dates later in the year. The UK will see the group over four dates in December.

From Italy, Ardours is a new alternative/gothic metal band formed by Tristania singer Mariangela Demurtas and multi-instrumentalist/producer Kris Laurent, with the line-up rounded out by Mariangela’s fellow Tristania member Tarald Lie on drums. The band debuted in August 2019 with the release of the acclaimed album ‘Last Place on Earth’ and have just released the four track covers EP ‘eu4ria’.

Featuring tracks originally by Maria Bazar, Nik Kershaw, Dalbello and Ultravox, ‘eu4ria’ encompasses some of their earlier influences. Mariangela Demurtas told MetalTalk “We felt we wanted to do something different for our fans before the next album, so we revisited four beautiful songs from the 80’s and made them sound our way.”

Recently the legendary Finnish band Nightwish announced their ninth album ‘HUMAN. :II: NATURE.’, which is due out this 10th April. It will be a double album containing nine tracks on the main CD and one long track, divided into eight chapters on the second CD.

Today the band have released a new single and lyrics video for their second single ‘Harvest’. The Nightwish European tour begins in November in Norway.

Victor Smolski’s ALMANAC have unleashed their third studio album, Rush Of Death, via Nuclear Blast, as well as a new lyrics video for the title track ‘Rush Of Death’.

Frank Beck (GAMMA RAY) has now joined as a full time member and will be part of the touring lineup.

Victor Smolski told MetalTalk: “After a fantastic time working with Frank during the recordings of ‘Rush Of Death’, we invited him to join us on our headline tour in February. He’s a great addition to our shows! His charismatic voice and stage presence fits perfectly into our band and we are very excited to announce Frank Beck as a new member on stage for all upcoming shows”.

“‘Rush Of Death’ is the title track of our new CD and it’s very dynamic, powerful and full of suspense. It fits perfectly into the overall concept, between really heavy songs like ‘Predator’ and the orchestral ‘Suite Lingua Mortis Teil 2’. To me, the new ALMANAC CD is the absolute highlight of the 5 year history of ALMANAC. Hard riffs, dynamic songwriting, monumental orchestral arrangements and adrenalin-soaked stories – all in perfect balance.”

See Frank in action with Almanac in ‘Rush Of Death’:

Swiss quintet Burning Witches have today released their new album ‘Dance With The Devil’ along with a fierce new single ‘Six Feet Underground’.

Discussing the single, the band told MetalTalk: “Six Feet Underground’ was the last song we wrote for the new album and it came together just a week before we entered the studio. It’s very melodic and catchy – if you hear it, you can’t help but sing along!“

These Heavy Metal Maidens will be touring the UK this month as support to Korpiklaani, as well as appearing at HRH Vikings in November. 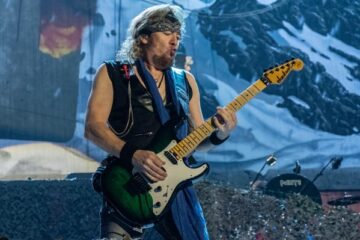