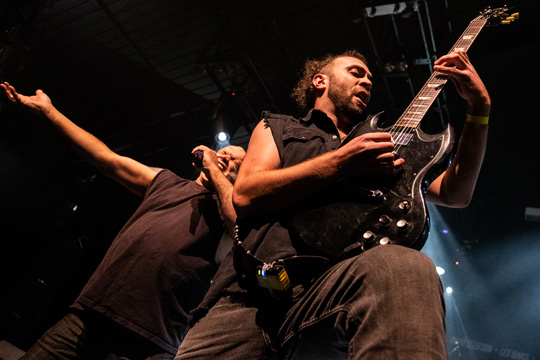 The 2020 edition of Burr Fest, the annual charity event held in memory of former Iron Maiden drummer Clive Burr, will take place at The Dome at London’s Tufnell Park this Saturday, 7th March 2019, and will be headlined by Blaze Bayley.

Bayley spent five years as vocalist for Iron Maiden, releasing the albums ‘X Factor’ and ‘Virtual XI’ and Saturdays set, in a first for the UK, will be composed entirely of Maiden songs from that era.

Absolva, one of the busiest Heavy Metal bands on the planet, make up Bayleys backing band and have just released a stunning new album ‘Side By Side’. Featuring ten original tracks of full throttle Metal and two covers, Absolva are a natural addition to the bill and MetalTalk are looking forward to catching them live again.

Chris Appleton told MetalTalk “Absolva are very much looking forward to performing at Burr Fest and we’re exited to return to London with our brand of British Heavy Metal. It’s an honour”. Absolva have just released a video for their new single ‘Burning Star’:

Special guests on the bill and playing their first gig in eight years, are Elixir. Burr Fest is to be the last chance to see the classic ‘The Son of Odin’ lineup together on stage, as the event marks Kevin Dobbs retirement from the music industry.

Tytan, a classic, but short lived, band from the NWOBHM era, emerged in 1981 from the rhythm section of Angel Witch. Regrouping in 2012, they have since gone on to tour gigs and festivals across Europe, also releasing ‘Justice Served’ in 2017. With Kevin Riddles telling Metaltalk “It’s a privilege to be asked to play Burr Fest, and an honour to play”, we are very much looking forward to their set.

Airforce, featuring former Iron Maiden drummer Doug Samson, are another cracking addition to the bill. In 2018 they released two EP’s, including a track with Paul Di’Anno, and last year released a track with the first Iron Maiden singer Paul Mario Day. As Burr Fest ‘veterans’ (they headlined the inaugural Burr Fest), Sampson, along with Chop Pitman (Guitar), Tony Hatton (Bass) and Flávio Lino (Vocals) will be welcomed back with open arms by all.

Opening Burr Fest are Kaine, from East Anglia. A band built in the tradition NWOBHM, MetalTalk recently spoke with the band and you can find out more and read how much they are looking forward to the event here.

Burr Fest 2020 is Sold Out and no tickets will be available on the day.