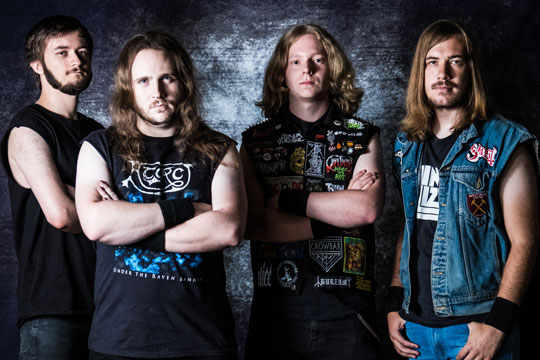 Burr Fest is back for the fourth annual charity concert held in memory of the late Clive Burr and this year promises to be a mammoth Heavy Metal celebration. Especially as, in a UK first, former Iron Maiden frontman Blaze Bayley will be performing a special set consisting of material released during his time with legendary band.

Opening the event is Kaine, whose latest album ‘Reforge The Steel’ is a contemporary slice of classic NWOBHM and a great followup to the excellent ‘A Crisis Of Faith’.

Formed in 2009, Kaine have played with this current lineup since May 2018, with this four-piece also releasing a recent live album. With a style often compared to Iron Maiden and Judas Priest, live, they are polished, loud and well worth watching. A new EP and album has been announced for later this year.

MetalTalk caught up with the boys from East Anglia, asking what it will be like to play this epic event and share the same stage as Blaze Bayley.

Rage: “It’s an honour to be asked to play Burr Fest this year, especially given the legendary bands and talent we’re on the billing with. It’s almost surreal that we’re going to be playing this one given that we’re a largely unknown band from East Anglia, if you’d told us when this version of the band formed that we’d be playing a venue as amazing as The Dome alongside Blaze Bayley we’d have probably thought you were winding us up!”

Liam: “I came into the band in April 2018 and this is probably the biggest show I’ve done with the band in terms of size and the status of the acts we’re playing with. We’ve also not played London in over a year, so it’s great to come back to the city and for such a great show for a great cause. I am itching to get up there to be honest!”

Isaac: “We’ve been together as this incarnation of the band for coming up 2 years, in that time we’ve done some great shows such as Colchester Arts Centre last year, and we’ve even released a brand new album so this is yet another opportunity to show a wider audience what this band is all about and what we can do on a bigger stage.”

MetalTalk: “You had a big line up change in 2018. How did that affect things in the Kaine camp?”

Rage: “It’s definitely been a period of rebirth and revival for the band with Liam, Toby and Isaac coming in and then writing and recording ‘Reforge The Steel’. It’s a cliché but this is very much a new band, but equally because of the calibre of the previous line-ups we’ve also still got a lot to prove to people and people to win back who may have written us off. We’re as good a line-up as anything that came before us.”

MetalTalk: “And so, in a few days time, its off to The Dome.”

Toby: “We’ve witnessed a number of great gigs at The Dome ourselves so it’s a dream come true to be able to play there for Burr Fest and being Maiden fans and influenced by those early Maiden albums with Clive Burr on, it’s an honour to be asked to play there.”

Rage: “Clive Burr obviously had such a huge influence on Heavy Metal drumming and has one hell of a legacy in the New Wave of British Heavy Metal movement. Not only did he play on those first three Maiden albums and the tours that broke them as one of the biggest bands in the world, but he worked with other legendary bands from the movement such as Samson, Praying Mantis and Elixir as well as acts such as Trust and Dee Snider. His legacy cannot be understated really.”

Burr Fest proceeds, as usual, go to MS Action Fund in Walthamstow, London, who worked with Clive throughout his battle with MS, and continue to work with his partner, Mimi.