Right about now is the time of year when thoughts turn to sunshine, to travelling, to something a bit lighter to get away from the endless dark. Enter The Night Flight Orchestra.

Aeromantic is the fifth album from the Swedish hard rockers, following 2018’s astounding ‘Sometimes The World Ain’t Enough’, and sees them on tremendous form with their signature blend of layered melody and driving rhythm.

For fans of Supertramp, ELO and Cats in Space, this multi-faceted melody driven album takes us on a wild ride through the cosmos. It’s pretty much a concept album, but I wouldn’t worry too much about that, any of these songs can be enjoyed at face value – and it’s the usual relationship drama, nothing new here – dive in and lose yourself in the ride.

The core of the band is made up of Björn Strid and David Andersson from Soilwork, and Sharlee D’Angelo from Arch Enemy, producing a sound that is very different from their day jobs, something that makes this side project truly interesting.
That talent is augmented by Sebastian Forslund, Jonas Källsbäck, Anna-Mia Bonde and Anna Brygärd (aka The Airline Annas) and a smattering of special guests too.

The album hits gloriously hard from the off, with the dramatic ‘Servants Of The Air’ and it’s a non-stop blast through the skies. Name a track – ‘This Boy’s Last Summer’, ‘Transmissions’, the softer ‘Golden Swansdown’, ‘Dead of Winter’ – I defy you to choose a favourite, and can guarantee that you can stop the album at any point and you’ll carry on singing to yourself from where it left off, like a loon, it’s that good.

The album is expertly put together, with interludes between each track keeping the pace going. There’s violins, there’s funk, there’s huge production numbers, it’s so damn joyful, even when the subject matter is getting intense.

These songs are going to sound immense live – and The Night Flight Orchestra start their tour this Friday at London Islington Assembly Hall before jetting off around Europe. Last time they visited it was an event we were talking about for weeks – don’t miss out.

Escape from the dull grey winter without leaving your seat. Put the album on, get up and have a bit of a dance, be happy. Repeat. Sorted. 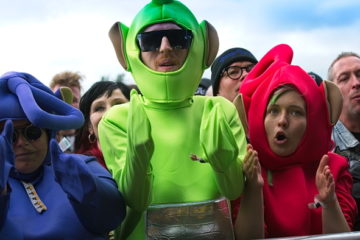