Flip is the coolest guy in the O2 Arena tonight. Scott Phillips, from Creed, Alter Bridge and Projected, is backstage with MetalTalk at this incredible venue and is excited for tonight, the closing date on the Alter Bridge Pawns And Kings tour with Halestorm and Mammoth WVH.

“I’m excited for the show this evening,” Scott says. “It’s been a wonderful tour but a very long tour. We’re gonna stick around for a few days and watch Mark Tremonti do his Sinatra show on the 15th, and then fly home and try and buy a bunch of Christmas gifts for the family.” MetalTalk will be there tonight, and it is sure to be a special evening supporting Down Syndrome Charities in the UK and USA. 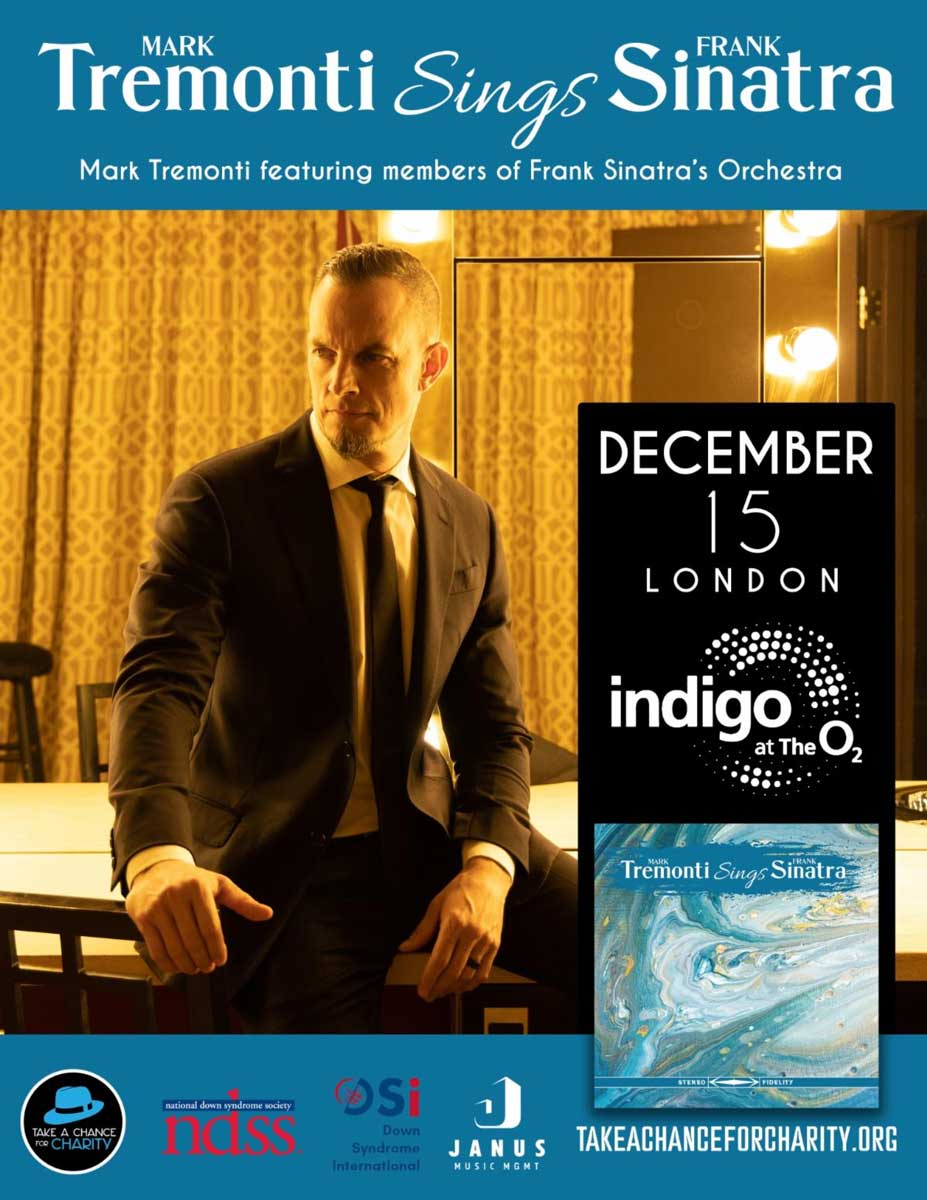 Flip got his nickname when starting Creed. “I wish there was a really cool story behind that,” he says. “When we started Creed and then toured, there were two Scotts in the band. So we went by our last names. He went by Stapp, and I went by Phillips. Mark Tremonti’s brother, Michael, was doing merchandise for us at the time. They had an Uncle Phil that they called Uncle Flip. Somehow my name got turned into Flip, and it just stuck. So I’ve been known as Flip ever since.”

Flip says it’s phenomenal to be able to tour again. “It’s been a really, really long time since we were able to get out and tour in any capacity. It’s probably almost to the day, or within the week we were here three years ago. We had one tour that happened in January through to the end of February 2020, and then everybody knows the story from there.

“We had hopes and plans of trying to get back out and tour to support the Walk The Sky album, which was kind of brand new at that time. But it just didn’t work out for anybody to get back out in a safe manner where the bands felt comfortable, and fans felt comfortable gathering in large masses together. So we lost that album cycle. Mark went out and did a Tremonti record. Myles did a solo record and a Slash record.

“Three years later, finally, we get our chance to get back out and do Alter Bridge properly. So we’re excited that we’re back out, especially in such an awesome venue and getting to wrap up what has been an extremely successful European tour in such a great way.”

This is the promotional tour for Alter Bridge’s seventh studio album, Pawns And Kings, which MetalTalk described as “a staggering new opus in an already glittering career.” They do seem unstoppable.

“Every ideas really start with Mark or Myles,” Scott says. “It’s their babies. We helped bring life to this record in particular. We recorded 12 songs. There are ten songs on the album. Five of them were initiated by Myles, and five of them were initiated by Mark. We have a joint dropbox file that everybody can put their ideas in, and Mark sent me some ideas with some pre-programmed drums on them. I went in and put my drums on them and then put it in the dropbox file where everybody can get a chance to listen to it and get an idea of how the album is shaping up.

“Then it’s basically the five of us, the four band members and Elvis, our Producer, that sits in his living room, which is now his studio, for a couple of weeks and goes through ideas and figures out what works and what doesn’t work. There are always some songs that are super easy where there are hardly any changes from the original idea. And then there are some songs that take the root idea and completely become something else.

“I would very much agree with that. Yeah, we’ve gotten a lot of compliments as a rhythm section with this album. Part of that is due to the writing. The styles of songs that Mark or Myles are coming up with that have a very rhythmic element to them which allows us to do whatever we choose to do on top of that. An album like Walk The Sky still had a lot of rhythmic stuff going on. It was a little more streamlined. So we’ve definitely had a chance to shine on this record, and I’m glad that people are taking notice.”

Recently Scott did a Rigged gear run-through, where he spoke about his love for DW Drums and Zildjian cymbals and said he had found a UK Manufacturer who made the perfect drum stool.

“I have to give a shout-out to Porter & Davies, the UK company. They made a drum throne that has basically a thumper, a speaker incorporated into it. Instead of putting monitors behind you or subs behind you, it’s all incorporated in the seat, and you have a small amp that drives it, which helps cut down on the stage volume. But you still get the same effect of having your floor times or kick drum or bass guitar or whatever you want to put in there.”

Alter Bridge had a click track at the performance with a 52-piece orchestra at the Royal Albert Hall, which was pretty spectacular. (I was there for both days.)

“We started, I think it was back in 2013, incorporating that just on some of the faster songs that we felt like in a live, adrenaline type moment if Mark starts the song or I start the song or whoever, that you kind of get that racing to the finish and I just knew that wasn’t our style.

“So probably 60% of the songs that we do, even tonight, will have a click track or a tempo map, where we can all lock in together and make sure that nobody’s getting ahead of themselves. Then there’s 40% that are still off-click that just feel better to be played completely live. Blackbird is one of those songs that we’ve never done to a click ever. Even when we recorded it in the studio, initially, it was completely live. It was all off-click.

“So some songs feel better, having that control of knowing that everybody’s on the same page, and then some are more fun to just kind of flow.”

Thinking of Blackbird, I was at Rock On The Range when it was the time of the sad passing of Chris Cornell. Alter Bridge performed, and we had an extremely choked-up Myles that literally couldn’t get his words out.

But I feel honoured to have been at that performance, and I can absolutely imagine that, obviously, Scott would not be able to have a click tracked something like that because it just needs to be live.

“You know, if it’s a little faster one night or a little slower one night, you feel the emotions in it,” Scotts says. “And that performance with Rock On The Range was for every artist….I mean, Chris Cornell and Soundgarden and Audioslave inspired and touched so many of us in one way or another with Myles specifically. He and Chris were close early on in Myles’s career. So that really hit home for him a lot. There were a lot of tears shed the night when we saw the news come up. So yeah, it was a special performance.”

One of Scott’s other projects is Projected. “The band has done three albums and 40 plus songs, and we’ve played one 20-minute show ever,” smiles Scott. “It’s music I love. For anybody that doesn’t know, it’s myself on drums, John Connolly, the guitar player in the band Sevendust, who is doing vocals and guitar on this. Vinnie Hornsby, the bass player from the band Sevendust and then Eric Friedman, the guitar player in Tremonti.

“We got together during a down period when Mark was recording the first Tremonti record. John had a bunch of songs that he had introduced to the Sevendust camp that ended up not getting used on whatever album they were working on. And so he talked to me. ‘You want to do a record?’ And I was, yeah, sure, why not. So we did the first Projected record, which, christ, I can’t even think of the name of it. It’s been so long now. Human, that’s it. A really, really cool record and it turned out way better than any of us had imagined.

“We decided rather than it being a John solo project that this was going to be a band. The problem is that all of us in different bands are so busy all the time that when one of us has a break, the other three are working, so we never have a chance to properly go out, tour and support. These are what I consider wonderful albums. They’re really good. Our second album was a double album and had 20-something songs on it. And then we just released Hypoxia last summer.

“We just haven’t had the time yet to fully support it. But you know, hopefully, in the future, fingers crossed sooner than later, we will actually get to go out and support it and perform those songs live.”

We definitely need some Projected in our lives, I say.

“I mean, it’s a lot of fun to do. And you know, we’ve all been friends with each other for a really, really long time. So I think touring together would be very easy. So hopefully sooner than later.”

Scott was nominated among the Best Rock Drummers in the World by the MusicRadar awards 2022. “It feels pretty surreal, certainly amongst the giants in the drumming world,” he says. “But I’m very honoured that we have a lot of very dedicated fans. I know when the announcement came out with all the nominees that they went and voted for me, for which I’m extremely honoured and flattered. I certainly thank everybody for considering me to be a part of that amazing community. “

We finished off with talk of a Fireball contest, but then Scott had a gig to play. Scott and the band have a couple of days in London, then the Tremonti Sinatra show, and then its back home.

But this will follow Monday night’s O2 Arena Alter Bridge performance. You can read about that soon at MetalTalk.

To read all this, visit https://www.metaltalk.net/tag/pawns-and-kings-tour.

Memoriam - Karl Willets Interview Part Two. Important "to stand up and make a point, make a stand, and say something important about things that I think need to be said." Interview: @hutchie224 @memoriamuk @willettsio

Interview - Memoriam - Karl Willets. I find Karl in his usual relaxed and jovial mood, all ready to talk about the band's next album, Rise To Power. Interview: @hutchie224 @memoriamuk @willettsio