MICHAEL ANTHONY: WORDS AND MUSIC – Excursions In The Art Of Rock Fandom 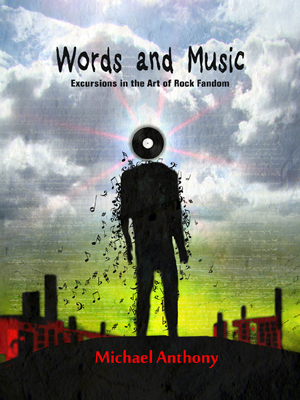 Before you get too excited, this is not a new autobiography from Michael Anthony, the wild Jack Daniels drinking bass man from Van Halen and Chickenfoot but rather Michael Anthony from Cardiff, a music loving rock fan who has put together an insightful read of his collective thoughts of what it means to be a loyal fan and what the words and music of his favourite artists mean to him.

Whilst Anthony is very sincere on his topic, talking how it felt being a young teenager witnessing Saxon in concert for the first time and his outpourings over the lyrics of Marillion, this weighty book does meander on at the best of times.

Most of his research is taken directly from quotes from the pages of Classic Rock Magazine and from the sleeve notes from the inlay cards of CDs. Quite frankly, what Anthony discusses here is no different from the conversations of many groups of friends huddled around pub tables talking about their favourite bands up and down the country.

He does talk with enthusiasm about The Doors, understanding the real Jim Morrison and about his love of Deep Purple and the whole Purple family tree and this will please connoisseurs of the band.

Fans of 80s progressive rock will find plenty of interest in this book as bands like Pallas and Twelfth Night hardly get a mention anywhere these days.

There is an interesting chapter where Anthony compares the Devil worshipping lyrics of Black Sabbath to the Christian lyrics of Geoff Mann, the Twelfth Night frontman, and finds a positive light in both.

The last chapter is an in-detail look at the first High Voltage Festival held in 2010 and headlined by ZZ Top and Emerson, Lake and Palmer, but do we really need to know such mind numbing details of how he checked into his hotel, waited for a bus but then had to get a taxi to the site, then walked around the perimeter fence and then had his first drink of the day… an ice cold water! Sex, drugs and rock n’ roll this ain’t.

If you consider yourself a bit of an anorak and have plenty of time and your hands then this book is actually an interesting read but for those who live in the fast lane then you may want to change the cassette over.