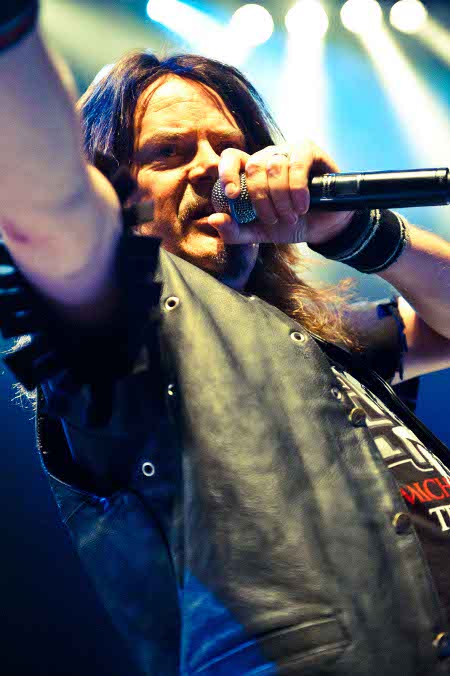 Doogie White has released the below statement regarding his parting of the ways with Rainbow 16 years ago.

The Tank/Michael Schenker vocalist felt compelled to do this because of a radio interview with Ritchie Blackmore’s wife and Blackmore’s Night partner Candice Night in which she gave a version of events that Doogie was clearly at odds with. Doogie’s statement is in full below.

“In the 16 years or so since I left Rainbow, I have never spoken publicly about my reasons for leaving. The truth is that I don’t believe it’s anyone’s business but Ritchie’s and mine.

“It was therefore with some interest (and a raised eyebrow or two) that I listened to the interview given by Candy on WRCN. I have to say that her version of events came as a surprise to say the least.

“While I am not named specifically, it is implied that I was party to a move within the band to hold Ritchie to some kind of financial ransom at what turned out to be our final show.

“That show was in Denmark, at Esbjerg, not Sweden Rock as Candy said in the interview, and I recall it rather well. Who wouldn’t, given what followed!

“I remember the night before that final concert when Ritchie, Cozy Powell and I sat drinking red wine, sharing tales and having a great time. If anyone had told me then that the very next night Rainbow would be no more, I would never have believed them. We played football together the next day, as usual, and all was well between Ritchie and me, as far as I knew.

“I cannot and do not speak for any of my former band mates, that is for them to do so, should they wish.

“For my part, though, at no point did I ever ask Ritchie, his management, or anyone else connected with Rainbow for more money. The notion that I was in a position of sufficient power to ‘blackmail’ Ritchie is pretty funny anyway. It was Ritchie Blackmore’s Rainbow after all.

“Of the future of Rainbow at that time, Ritchie and I had talked of a new album at the end of the US tour in 97. That would come, I was told, after he had ‘finished with Candy’s album.’ I actually took five song ideas to Esbjerg and gave him the tapes. You can find most of them on the Cornerstone album ‘Human Stain’.

“I remember very clearly the conversation Ritchie and I had outside his dressing room that night after the show, and I remember the reasons why I did not sign that hastily reworked contract there and then. Those reasons are as valid today as they were on my return to London after the show (I returned to London on my own incidentally and did not, as has been suggested in the same interview, arrive at the plane the next day drunk with another band member). Those reasons are between Ritchie and I, they have remained private for many years, and they will remain so for many more, despite this silliness.

“For the record, Ritchie always treated me fairly. I got paid what I was contracted to get paid; whether it was publishing, performance fees or merchandise payments and I never had any issues or problems with him.

“I always appreciated that he gave me a big opportunity and took a chance on me. In return I gave him, Rainbow and the fans my very best.

“Even after I had left the band, there were a few occasions when Ritchie stepped in on my behalf when the new ‘management’ would not/could not help on certain matters. I am grateful to him for that.

“The only thing I wanted more of from Ritchie was time: more time to make great music with him.

“For what it’s worth I believe that the reason Rainbow did not, has not and will not continue is because Ritchie wants to do something else… Blackmore’s Night.

“Neither I nor Ritchie will lose any sleep over this. And neither should you.”

Doogie and Candice together in ‘Ariel’…

MICHAEL ANTHONY: WORDS AND MUSIC - Excursions In The Art Of Rock Fandom