We all secretly like something that scares us a little, that little frisson of goose-bumping, sweat inducing fear that makes our hearts beat a little faster and makes us feel alive. There a very few bands on the planet who understand that as well as Ward XVI, the North West combo having made their mark with their own take on theatrical shock rock that always aims equals Alice Cooper and Rob Zombie at their height.

With ‘Metamorphosis’ they prove without a shadow of a doubt that they have both the chops and the material to bring their crawling and sinister vision to life.

Following on from their ‘The Art of Manipulation’ album, this second chapter of the tale of convicted killer Psychoberrie delves right back to her past and tells the story of her genesis from a babe in arms to the calculated and unhinged femme fatale she became.

As with the first album, this is an immersive and theatrical experience, the music painting pictures more vivid and personal than any film or book could, demanding to be experienced as a whole as you drift down the halls of a family home and eventually onto the high security walls of the insane asylum that holds our anti-heroine. 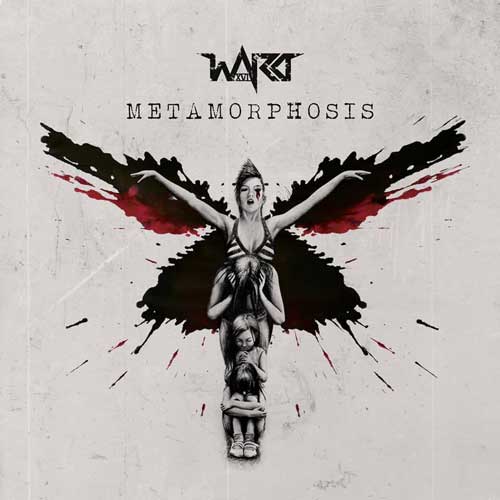 Mixing the sort of sinister sideshow carnival unease with a pounding Metal attack and a sense of old school musical, the band capture the fractured mind of Psychoberrie in a vivid way that swings from the delicate to the totally full blooded. The ambition and vision here is a step up from the previous album, the more electronica elements of the debut more or less disposed of in favour of a broader and more sophisticated palette of sounds.

The songwriting here is bigger too, the band ever more impressive as they hone both their style and narrative, time giving them the opportunity to springboard onto the expanded universe they inhabit.

There are some truly breathtaking tracks on the album and it opens with the immense ‘The Cradle Song’, a genuinely powerful and jaw dropping epic that sets the bar incredibly high, the vocals and guitar work stunning. What so wraps you up is the mood of the piece, the note perfect interpretation of not only the music but of the whole spirit of the tale and it marks the track out as not just a highlight of the album but of the year.

It is a tough act to follow but sinister rocker ‘Mr. Babadook’ bristles with gothic horror, it is an Alice Cooper meets Rammstein feel tearing at your very soul.

From the insane waltz of ‘Daisy Chains’, the riotous ‘Broken Toys’ and the Middle Eastern mysticism of ‘Burn The Witch’, the band mix hard riffing guitars, flowing keys and rampant drums and bass to huge effect. These are the perfect vehicle to move along the story and compliment the vocals of Psychoberrie as she switches between the sweet, sophisticated and feral, the insanity and intelligence never far from the surface.

Each track has its own special moments, the material flowing seamlessly and when the album closes on the dramatic ‘Shadows’ you can not but be itching for the next part of the unfolding tale.

It may be a little misleading to call this a concept album, the mere phrase raising dismissive snorts of derision from some circles, as this is so much more. Certainly, the continuing story that the band have delved further into on this sophomore album builds its own world, but it is so much more than just that as they continue to expand the narrative, drawing the listener further and further in.

As impressive as the central concept is, it is the execution that leaves the biggest impression, the performances genuinely thrill and are aided by a sparkling production that sees the whole hit exactly the right stylistic notes.

Quite where things go from here is anyone’s guess, but it is going to be well worth waiting for.

Disturbing, unsettling, grand and exhilarating, ‘Metamorphosis’ electrifies from the very first note to the last.

Previous articleAnneke van Giersbergen proves she is virtually unstoppable
Next articleLive At Knebworth ‘76 / Lynyrd Skynyrd, the finest Southern Rock band on the planet