The eagerly awaited autobiography from Adrian Smith, ‘Monsters Of River And Rock’, is released tomorrow (3 September) via Virgin Books/Penguin Random House and it is an engaging read from one of the more elusive members of Iron Maiden.

Adrian was born in Hackney, 1957, and the early part of the book is devoted to his formative years, where he learnt to fish with his Father, Fred, and discovered the subtleties of the sport, along with the benefits of a Sunday lunchtime pint.

Fishing is a constant thread throughout the book, so approaching it expecting a 100% dive into the inner workings of the biggest Metal band on the planet will not work for the reader.

But, this is an autobiography written by Adrian and as a story of his life and musical exploits, it does it’s job splendidly well.

Read our recent interview with Adrian: Part One  Part Two

The early years are covered well, including buying his first guitar from Dave Murray for £5, having already discovered Deep Purple and ditching fishing for music.

Its also fair to say that the first half of the 80’s consumed Adrian.

It was a time of constant touring, with booze and drugs easily available. Adrian talks about bouts of depression and, being naturally shy, how drink helped him cope with the growing fame.

Around this time, a return to fishing helped Adrian to deal with the stresses and relentless aspects of touring.

While it might seem glamorous to travel the world in a famous Metal band, to come off stage after a gig, adrenalised, then face the repetition of bus, beers, little sleep, check in hotel, sleep, soundcheck, gig, would be challenging for all of us. Fishing helped to bring some normality into his schedule.

A fish finger, peas and chip supper leads to a fantastic passage of travelling through Canada with future wife Nathalie, following the conclusion of the World Slavery Tour in 1985. As the trips progresses, you get a sense of Adrian unwinding and finding that there is life outside the band.

The years between his Maiden stints are not covered in great detail and the two year tour with Bruce Dickinson is a brief passage.

It is clear that towards the end of his first Maiden tenure, Adrians attitude was not that positive but, grown up and with a wife and family, the second spell would be different. The return to Maiden is discussed and once the three guitarists and new producer Kevin Shirley finished their “bit of cock fighting”, all things move on, with the first track ‘The Wicker Man’, a Smith/Dickinson composition, being recorded.

You can see that Adrian is in a better place now, from the stresses of the early years.

As he told MetalTalk in an interview earlier this week: “Its funny because now we [Iron Maiden] have breaks. We haven’t seen each other for six or nine months and we start jamming and it feels like we just played yesterday – its very intuitive.

“It’s great fun now. I mean I certainly enjoy it more now than I did in the 80’s. Maybe because it’s a bit better paced now.

“There was no balance in the 80’s, it was all or nothing.

“Now there’s a good balance of family life and music and fishing!”

Having only fished twice myself, there are elements in the book I cannot relate to first hand, but it is explained in an understandable way and as a viewpoint into Adrian’s life, it works well and joins the musical elements nicely.

‘Monsters Of River And Rock’ is the story of an epic journey. That Adrian comes out of it with knee and backaches, a repaired achilles and a badly sun burnt half of face (which needed surgery), is a lot easier than some of his contemporaries have suffered.

There is much to learn about Adrian Smith and with this autobiography, every Iron Maiden fan will find something to enjoy. 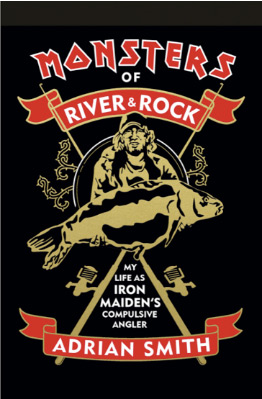