With the eagerly awaited autobiography ‘Monsters of River & Rock’ from Iron Maiden’s Adrian Smith hitting bookshops this week, MetalTalk’s Kahmel Farahani spoke with Adrian at length about his time with Iron Maiden and how a return to fishing helped him deal with the rigours and stresses of touring.

MetalTalk: You’re just about to release your new book ‘Monsters Of River And Rock’ – What inspired you to write it?

Adrian Smith: “Well I suppose, like a lot of things, I was just sitting around with some friends talking fishing stories and music stories and they said ‘oh you should write a book’.

“I met with some publishers and Penguin really liked it, so I stared writing the book!

“It was great going all the way back to where I grew up and trying to fish around Central London and going out on Sundays with my father and really enjoying it.”

Your book is dedicated to your father right?

“Yeah! I had to really. He was the one who would religiously take me fishing every Sunday. He taught me all the basics and from there it sort of grew.

“The book covers my story really.

“When I was 15, I heard Deep Purple and Black Sabbath for the first time and fishing stopped really.

“I wanted to be a professional musician so I gave it all up.

“The irony was that when I joined Iron Maiden, Clive Burr was a keen fisherman and we started going fishing together. But I had a ten year break from it when I just concentrated on music.”

Martin Birch, who produced most of Iron Maiden’s 80s albums, recently and sadly passed away…

“Very sad. Just very sad. I liked Martin and we got on great. He was great with everybody.

“Obviously he had a very long list of big name bands he worked with and I think I did around six or seven albums with him and he always got the best out of me.

“He was very organic in his approach and he just brought out the best in the band, you know.

“He didn’t hide behind any big production tricks and he was a great engineer too.

“I tried to get him out fishing a few times but we never managed it.

You wrote that you actually turned down joining Iron Maiden in the very early days and then you just ran into Dave Murray and Steve Harris who asked you again.

“That’s right, yeah! There’s lots of little stories like that in the book that connect the fishing stories.

“I think that was around 1980 and I had my own band and we were struggling a bit since Punk had come along.

“I just happened to bump into Steve and Dave, who had been rehearsing near where I used to live in Clapton.

“They’d asked me to join a few months earlier and I said “no”, after a lot of deliberation, since I had this band [Urchin] for around five years and it looked like we were going to get into the studio and do an album.

“But of course that never happened.

“I was a bit down on my luck when I bumped into Dave and Steve again and this time I said “I’ll be ready if you need me” and that was that.

“Just goes to show, sometimes it just takes a little bit of luck, a bit like fishing really. Sometimes you just bump into someone and get talking.”

In your book you quoted Billy Connolly saying “Fishing is like meditation, but with a punchline”.

“Yeah (laughs). I was a big fan of Billy Connolly, like a lot of people and read a couple of his books and thought it was a great quote which summed it all up.

“I wish I had thought of it, but I had to credit Billy!

“Turns out he’s a keen fisherman too.”

There’s a wonderful story in the book about the time you, Dave Murray and Clive Burr went carp fishing in America.

“Yeah! It was during the ‘Number Of The Beast’ tour!

“By that time Dave had taken up fishing too and it was something to do on tour – lots of down time and getting into trouble, if you’re not careful.

“There were these department stores in America, which were new to me and all of us, where you could buy everything from a bloody assault rifle to a fishing rod!

“So we obviously went for the fishing rods (laughs).

“The carp was regarded as rare special fish in England when I was growing up, but in America they were sort of regarded as trash fish which I couldn’t understand.

“We three ended up fishing in the creek near the hotel and I caught my first ever carp!

“It was funny, because the guys from The Scorpions were there as well, since we were supporting them on tour, and they were taking a great interest in what we were doing.

“We loved The Scorpions. They really lived the Rock star life. I think they were dressed up in their stage gear, watching us fishing on this boiling hot day all dressed to the nines.”

You wrote that fishing around the world was a similar experience to buying your first Les Paul.

“Yeah. You hear about all these wonderful places. Like New Zealand is this beautiful unspoiled fishing paradise.

“I read so much about it and got so excited to go there. I fished in India too which didn’t go as well (laughs). That’s in the book too.

“Basically I was expecting to catch a ten pound trout on my first cast but, of course, you still have to be patient and have a little bit of dedication and know how. Just because you’re in this beautiful location, it doesn’t mean you’re going to catch anything.

“But of course you’ve got to put the work in.”

Do you think there’s a parallel between fishing and songwriting with regards to patience?

“That’s a good question. I find now I can really turn on the writing like a tap, which I never could before.

“That’s just knowledge and development of the skill, I suppose.

“Fishing is slightly different – you have to do your research, but still be patient and dedicated.

“You have to develop your intuition and your gut feelings. But there is a similarity.”

As Iron Maiden got bigger and bigger in the 80’s, was fishing your outlet to relax?

“It was absolutely crazy and everyone was burned out.

“When we finished the tour I think we were all in L.A. and I didn’t fly home with the rest of band, because I just started seeing my future wife Nathalie at the time and she was in L.A.

“So I stayed on for a while.

“But that tour was crazy and after I was just craving… well I didn’t know what I was craving, but it was something (laughs).

“So Nathalie suggested we go on a trip up to Canada, where she’s from, and although I’d already been to Canada touring, I’d never really seen it.

“It was just one of the most beautiful places and it was really great to kind of decompress after 12 months of craziness on the road.

“Just sitting in a lake in the middle of nowhere in a fishing boat.”

Keep an eye on MetalTalk.net for part two of the interview, plus some more in-depth news about the book.

Guns 'n' Roses Have Plug Pulled On Them At Leeds 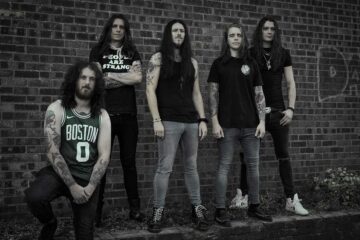