The chances of Deep Purple reuniting with Ritchie Blackmore look as far away as they ever were after three members of the current and mark II line-ups scotched the suggestion.

During the SiriusXM Town Hall show on Tuesday, August 29th, Ian Gillan, Ian Paice and Roger Glover were asked if they would be open to playing with Blackmore again.

“Me personally, no. I mean, I get on great with Ritchie these days, but I don’t think Ritchie’s playing great these days. And for that reason mostly, I don’t think it would work.”

Gillan clarified that he is only in contact with Blackmore “through our offices, through our connections and everything else” and added that “we have invited each other to dinner a couple of times, but we haven’t been able to make it because I’m in London, he’s in Long Island.” He then reiterated: “But, no, I’d be against [a reunion].”

Ian Paice was equally resistant to the idea, explaining:

“I enjoy going on stage every night knowing that I’m with my four friends and they’re all gonna play every night. That wasn’t always the case [while Blackmore was in the band], and I wouldn’t want to go back to that again.

“It’s just the way the man is. He is a man of great emotions. He works it out in black and white; there’s no gray areas to Ritchie: ‘I will or I won’t,’ ‘I like it or I don’t like it.’ Sometimes your band members can’t suffer from that. And I wanna go on stage and have fun. I don’t wanna go on stage and come off feeling so down and miserable. I’m not prepared to go back on that route again, no.” 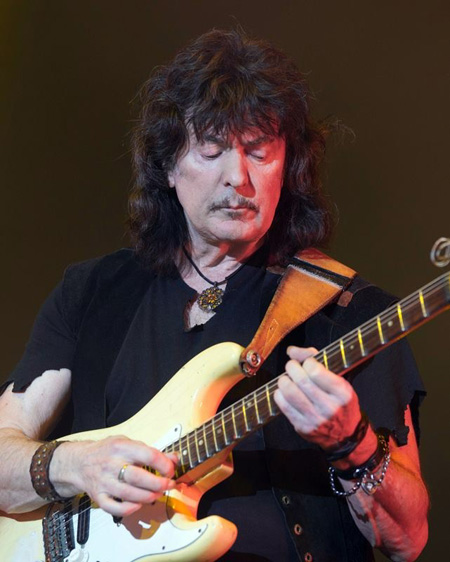 Ritchie not playing so well at Birmingham last year…

Roger Glover revealed that he hasn’t spoken to Blackmore in “twenty-odd years,” but insisted that he would “be happy to talk to him.” Attributing their lack of contact to the fact that Ritchie has “made himself very private,” Glover added:

“I don’t think he approves of me very much, because of the remixes and the remasters that I did of the older albums. That’s what I’ve heard anyway.”

As for Purple performing with Blackmore again, Glover said:

“You can never say never, but I would doubt it very much.”

Blackmore is a co-founder of Deep Purple and wrote many of their most memorable riffs, including ‘Smoke On The Water’, but he has not played with the group since his 1993 departure.

Steve Morse took Blackmore’s place in 1994 and has now been in Deep Purple longer than his predecessor.