The news that NIGHTWISH have announced a new album means that something special is on the horizon. The band’s ninth record ‘HUMAN. :II: NATURE.’ will be released on 10th April 2020 and will be a double album containing nine tracks on the main CD and one long track, divided into eight chapters on the second CD.

Today, the band releases the first single and video clip for the song ‘Noise.‘

“The lyrics got their start originally from something Tim wrote,” says Neil Fallon. “It involved a Dodge Swinger and Jesus. I added some words and one of them was ‘AstroTurf,’ but that had one too many syllables. So I changed it to ‘Spacegrass’ – and the rest is history.”

Last March, Whitechapel released their seventh full-length, The Valley and kicked off a world tour. Today, the band has released three live videos, featuring tracks from The Valley. Check out “Forgiveness Is Weakness”, “Brimstone”, and “When a Demon Defiles a Witch” below.

Chester Bennington’s pre-Linkin Park band Grey Daze have announced ‘Amends’, a full album of previously unheard music. To be released on 10th April, ‘Amends’ is the origin story of one of modern rock’s most recognizable voices and a full circle moment among friends.
The album is the fulfillment of a planned Grey Daze reunion that Chester announced prior to his untimely passing.
Speaking of the video concept, Grey Daze founder and drummer Sean Dowdell told MetalTalk “This is loosely based on a true story from when Chester was 15-years-old. He was being bullied at school and one day suffered a real beating. That was the day I assumed a role as protector and almost older brother figure to Chester that has lasted since, even after his passing.”
Watch a new mini-documentary here:
Watch music video for new single ‘Sickness’ here:

Whitechapel / See the brutal imagery of A Bloodsoaked Symphony

Whitechapel / On album Kin, “I see more growth and a limitless potential” 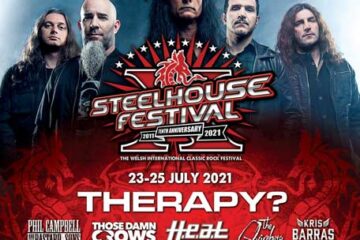