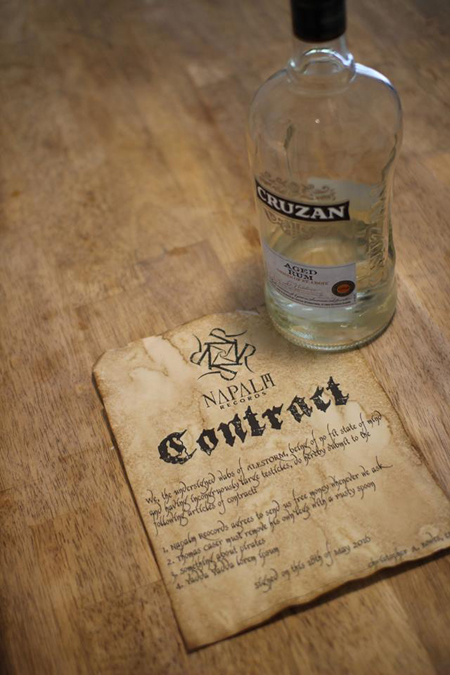 Heavy Metal highwaymen of the high seas Alestorm have had their contract with Napalm Records extended and will be starting work on their fifth album as soon as they are in a reasonably sober enough state to do so.

And in true Alestorm style, the band have signed their new contract in… rum.

Alestorm are currently holed up in Nancy’s Harbour Cafe after recently completing a gruelling and mighty quest with Sabaton where they used a giant rubber duck as their backdrop. They’ll be undertaking a north American tour in the very near future and the next scheduled UK appearance is at HRH United 3 in March 2017.

Andy Turner at Napalm Records told us: “Now this is good news to start with. It’s all about rum and pirates… We at Napalm like rum and we especially love Alestorm.

“The pirate metal band have just announced their worldwide re-signing with Napalm Records and they have inked this contract in blood… OK they decided to use rum instead. Cheers!”

“AHOY! After eight years, four albums, one live DVD, an EP and a couple of singles, it is my great pleasure to announce that Alestorm will be re-signing our record contract with Napalm Records.

“Seven years ago I was standing naked in the middle of a field at Summer Nights Festival in Austria, screaming at Thomas Caser (CEO of Napalm Records), demanding more money. Now here we are today… looks like our plan worked!

“Being pirates, we had to sign the contract using rum as ink, nothing else would do! Unfortunately we only had white rum left (all the good stuff had already been drunk), so our signatures are invisible. We’ll leave that one to the lawyers to sort out.

“Expect the fifth Alestorm album to be released on Napalm Records in 2017! We’re taking our time with this one, and it’s gonna be good. Maybe.”

Napalm Records A&R Nadir Amrioui added: “We are more than proud of Alestorm and their remarkable success! Eight years ago we’ve received this strange demo CD of an even stranger Pirate Metal band. That was the beginning of a piratic journey all over the world. We at Napalm are so much looking forward to the next album. This is going to be awesome. It surely is!”