‘Miserere’ is the second album from German Black/Death Metal trio Wolves Den, the title of which translates as “Mercy”, of which, absolutely none is given on this crushing, wrath filled, eight track offering of ebon excellence.

The album follows and builds on the blackened brilliance of their 2015 slice of darkness ’Deus Vault’. So if you enjoyed that album then you’ll be overjoyed by this latest insidious monster.

This time around Wolves Den have gone darker. That minor element of a Folk Metal edge, a throwback from two of the members being formerly with Epic Folk Metallers Equilibrium, on the previous release has receded even further into the background.

This is in favour of an even stronger, more Blackened Death Metal leaning and the result is much more aggressive and powerful, whilst still maintaining an engaging melodic, though slightly melancholic, edge.

Sound wise its very precise, carefully considered and delivered. The drum work is immediately noticeable on the opening track ‘Tides of Hate’, where militaristic drum rhythms dominate and set the pace and mood for a dark punchy and powerful track.

It’s a well-paced release throughout, ebbing and flowing in both speed and intensity. Often opening with reflective or haunting intros, as on the intense and punchy ‘Pfad ins Dunkel’ and the dark and powerful ‘Der Frost in mir’ with its reflective acoustic close.

Vocally I cannot fault this either. Coming in on two levels, particularly on the sinister yet haunting ‘Nachtmahr’ where you get a dialogue between the deeper growl and higher vitriolic rasp. There is also good use of haunting choral backing vocals especially on ‘Antaios’, adding a reflective element to an otherwise brutally delivered offering. 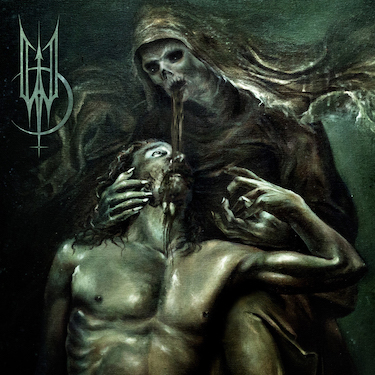 I love the whole album, but a few tracks did stand out above the others for me; opener ‘Pfad ins Dunkel’ which is so superbly engaging. It fires you up into wanting to hear the whole album.

The warped and sinister ‘Häresie’, with its superb second half drum frenzy and insane otherworldly vocals. And the closer ‘Nameless Grave’ – a classic Black and Death offering which is hugely engaging, thanks to the harsh and punchy melodic edge, balanced with a symphonic undercurrent, along with that haunting ebb and flow that proliferates across the release. It really encourages you to go listen to the whole album again.

The darkly evocative artwork is by Lisa Vinstervan and merits a mention as it captures perfectly the dark sinister feel of the album.

‘Miserere’ will be available on Trollzorn Records from the 15th of May and well worth your attention if you enjoy an engaging chunk of Blackened Death Metal.