Primal Fear guitarist Magnus Karlsson has announced the release of ‘We Are The Night’, the third album from his solo project ‘Magnus Karlsson’s Free Fall’. As before, a glittering array of some of the finest melodic Heavy Metal singers guest on the album.

The single ‘Hold Your Fire’ is out today, ahead of the 8th May schedule for ‘We Are The Night’. If features the vocals of Dino Jelusick.

Karlsson told MetalTalk “I first heard/saw Dino on YouTube and then checked out his band Animal Drive. I was totally knocked out by his amazing voice! It can be compared with many of the singing legends we adore, but he has also got his own style filled with heart, soul and tons of power. Crank up ‘Hold Your Fire’ and get ready to get blown away by the awesome Dino Jelusick!”

Contemporary progressive Metal fans will be excited by the news that Australians Caligula’s Horse have announced their new album ‘Rise Radiant’ will be released on the 22 May 2020.

Lead guitarist Sam Vallen told MetalTalk “‘Rise Radiant’ is the album we’ve been working towards for almost a decade. It represents everything we love about Caligula’s Horse – the colour, the ferocity, the introspection, the extremes – all tied up together in a way we could never have managed until now. As a band, we’ve never felt tighter, more inspired, or more driven than in the creation of this record. We’re tremendously proud of ‘Rise Radiant’, and we can’t wait for you to hear it!”

The first song from the album and opening track ‘The Tempest’ is out today. The band are scheduled for a North American tour in May/June.

Swedish Metallers Soilwork have released the new song ‘Desperado’. As the second part of the ‘Feverish’ trilogy, ‘Desperado’ is “shock rock and Metal mayhem for those of us who long for a way out”.

The song follows their acclaimed album ‘Verkligheten’, released in January.

Smackbound, a new Heavy Metal band from Finland, will release their debut album ’20/20′ on the 8th May and, ahead of this, the single ‘The Game’ is now out with a beautifully crafted video.

As for the rest of the album, vocalist Netta Laurenne described it as ”..a versatile album with music for all moods. The songs are melodic and have a great drive. We are trying to clear the clutter from our hearts and heads and hope that the same process will happen to everyone hearing the record. It is all about energy in this world and we are trying to keep that energy alive and moving so that it can reach the listener and have a true impact and connection with them.”

Wisconsin based Jared James Nichols has released a new single ‘Threw Me To The Wolves’, complete with trademark fantastic solo.

Nichols told MetalTalk “‘Threw Me To The Wolves’ is a song we can all relate to. In life, we ultimately have to look certain situations in the eye, good or bad, in order to make the change and continue to grow. I wrote this song with my friends Mark Jackson and Ian Scott in one afternoon. It basically wrote itself.

“Wolves feels like such a natural progression for me as an artist, it has all of the musical elements I love. It was an absolute blast to be able to use my touring band, and work with long-time friend and producer Jay Ruston.”

Following their dates with Phil Campbell in the UK and Doro in Europe, King Creature have been back in the studio and today sees the release of ‘Falling Down Again’, a song that quickly became a crowd favourite on the road.

The band explained “The songs written about a close friend who was trying to take a sabbatical from alcohol whilst also trying to enjoy his daily life, he kept falling down again but he had no one to lay the blame on. King Creature are a tight misfit family where we have so much influence on each other, things spill out in our lives (amongst the beer) but we are constantly looking after each other and those around us, in the best way possible. Though the song has its hardships and feels like it’s about failing, it’s upbeat and positive highlighting the benefits of being social with your friends when you need it, like a big old crazy family, there’s no sadness. And who doesn’t enjoy a pint!” 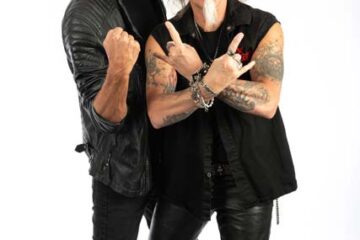