Michael Andrew ‘Duff’ McKagan may be best known from his time as the bass player in what was once called the most dangerous band in the world but as well as the albums and tours with Guns ‘N’ Roses he’s been a solo artist for more than twenty five years. The word was out that the plan on this latest tour was to play new album ‘Tenderness’ in its entirety and Islington’s grand Assembly Hall was full of die hards excited at the prospect.

This gig won’t be the setting most fans have been used seen McKagan in. Inspired by his own experiences on the road, ‘Tenderness’ draws on issues of homelessness, gun violence, sexual abuse and opioid drug addiction, but far from all the grit in McKagan’s words this is, in essence, a healing album. Collaborating with Shooter Jennings, the son of Waylon Jennings of outlaw country fame, the legendary bassist took a new direction.

On the surface, it may seem that this country rock infused album is a detour from the rock road but in reality it is something we’ve seen before, an amalgamation of blues, southern rock and punk that influenced G’N’R and shaped their unique sound. Tonight, we got those different elements in their purest form.

Joined by Shooter Jennings and his outstanding band of musicians (Aubrey Richmond – fiddle, Ted Kamp – bass, John Schreffler – guitar, Jamie Douglass – drums), the set delivered an evening full of emotion and reflection with carefully inserted bursts of energy coming from Duff’s journey and influences, a set haunted by electric guitar and fiddle which added some much needed Nashville stardust magic on this warm London summer night.

Dressed in black and looking every inch the rock legend that he is, the main man walked on to the stage armed up with his vintage Gibson Hummingbird and opens with Guns tune ‘You Ain’t The First’. As soon as Jennings hits the first power chords on his keys the crowd knows that the eagerly anticipated title track, ‘Tenderness’, is to follow, one of the most distinctively beautiful songs of the album.

‘Chip Away’ is said album’s most upbeat track and gives us one of the most energetic moments of the evening with fans actively joining in throughout. Songs like ‘Feel’ and the #metoo inspired ‘Last September’ darken the mood. McKagan makes a heartfelt opening to ‘Feel’ about his appreciation of people that touched his life, dedicating the song to his one time Velvet Revolver bandmate Scott Weiland, Prince, Chester Bennington, Lemmy and Chris Cornell, who have all passed in recent years.

‘Wasted heart’, from his Loaded days, got a new acoustic makeover for ‘Tenderness’. As McKagan explains, the song was written for his wife during his troubled times. ‘River Of Deceit’, a Mad Season cover, opens to Richmond’s enchanting solo, with fiddle remaining one of the protagonists throughout.

“You are a bit quiet” is a surprise reaction from the stage, but it is the type of silence that comes from a different place. This album’s themes are not easy to deal with. Music has been, a vessel to raise social and political awareness through the decades and Duff wants to be the messenger this time. It is refreshing.

He doesn’t take long to make every single fan in the room happy and loud again though. ‘Dust N Bones’, interestingly another Stradlin-sung GNR song, lifts the crowd immediately. Not included in GNR’s recent tour, musically the tune fitted this gig perfectly as well as McKagan’s vocals on which he was supported by Richmond. It may seem to the outsider an intimidating task to deliver a Slash solo but John Schreffler delivers it full of charisma, his own personal touch, skill and heart. “Well that was fun”, smiles Duff at the song’s end.

‘Falling Down’, another highlight of the evening is a crowd pleaser, with hypnotic vocals and guitar, but the most revealing music of the set is kept to the end. Wrapping up the gig with a mix of material sourced from his influences, his roots, his journey and his future, we got to enjoy what you might say is the real Duff McKagan.

There was a cover of London punk rockers The Clash’s ‘Clampdown’, supported by powerful vocals from all the band. A top moment is followed by another one with Guns ‘N’ Roses tune ‘Dead Horse’.

Looking to leave behind inspiration and hope, the last song from ‘Tenderness’ is ‘Don’t Look Behind You’ which achieves just that, “…light …coming through”.

A soulful piano intro to Mark Lanegan’s ‘Deepest Shade’ which sees Duff leaving his guitar behind and moving to the very front of the stage to sing the song directly to people’s eyes, before inviting his wife Susan on stage to slow dance with him, a vision which brought back memories of nineties magazine cover magic with the rock star and the super model.

This was truly a soul warming and intimate gig, reflective and full of honesty, There might have been fans unnerved hearing about difficult topics in the new material, but by the end the room seemed full of hope for the future. A rock legend had left his unique stamp on all those around him.

FROM THE ABYSS: CULT OF LUNA REVEAL 'A DAWN TO FEAR' 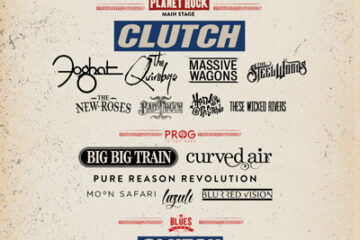