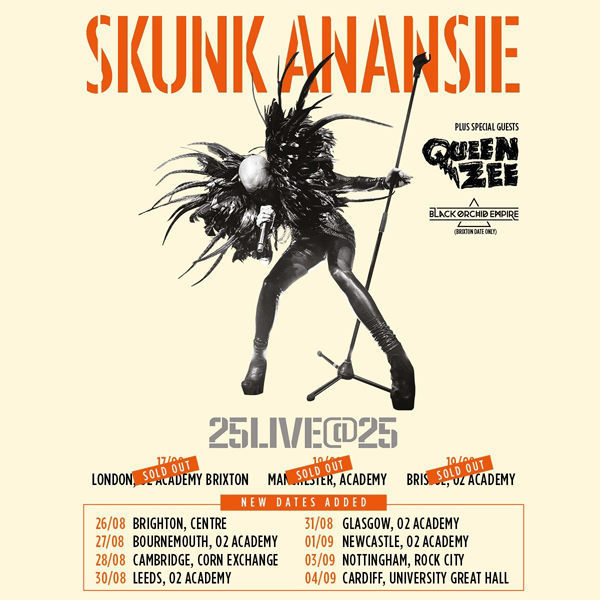 Whenever you hear a band or see them live, one inevitably thinks “oh, they sound a bit like so and so” or perhaps “their look reminds me of so and so”, but with Skunk Anansie you can only really say they sound and look like Skunk Anansie – there is no other band like them.

And twenty-five years since bursting onto the scene, they are still unique in the world of music, both in sound and image. Soundwise you not only have the more usual range of hard and soft rock songs but a real mixture of styles at times throughout the set such as punk drumming, reggae bass slapping or rave-esque moments with the electronic sounds on top of a thumping beat and strobe lighting.

However, unless looking out for these aspects, it wouldn’t be that noticeable as it all effortlessly sounds like Skunk Anansie thanks to the unifying sound of Skin’s voice. Her vocals are unique, flitting between more short, hip hop style phrases to the characteristic long howls where image-wise she looks unchanged from the front cover of the 1996 ‘Stoosh’ album. She is truly phenomenal and in a league of her own with her Kate Bush meets Keith Flint sounding vocals.

She is a masterful frontlady, working through all the human emotions in her songs, from (political) anger and rage to love and sadness; it all feels very personal to the band. With that sense of the personal and unique, came a clear desire to share this with the audience. There was an amazing feeling throughout the two-plus hour long set of a coming together between band and crowd. Initially, the performance started very professional and as the crowd increasingly warmed, Skin increased her engagement and interactivity.

I can’t remember the last time I saw a front person of this stature get this personal with the crowd with Skin joining the crowd on numerous occasions, either in a friendly circle or crowdsurfing. The mutual level of trust, respect and friendship shown created a wonderful atmosphere and increase in crowd volume. In turn, the band were thoroughly enjoying it, allowing themselves to go more off script between songs such as drummer Richardson taking a moment to bond with his birth town, and at one point Skin even claiming “this is the best gig so far on the tour”.

In terms of songs, there were little surprises as they worked through a catalogue of classics: whether the thumping ‘Because Of You’, the iconic ‘Weak’, the emotional ‘Hedonism’ or quite clearly political ‘Yes It’s Fucking Political’. However, the set did feature two new songs, the angry ‘This Means War’, proving they refuse to mellow with age, and the rather catchy ‘What You Do For Love’.

Skunk Anansie, remain true to themselves in being a distinct and unique group of individuals who together make some incredible sounds and are fantastic to witness live.

Setlist:
Charlie Big Potato
Because Of You
On My Hotel TV
I Can Dream
Charity
My Ugly Boy
Twisted (Everyday Hurts)
Weak
Cheap Honesty
Love Somebody Else
I Believe In You
God Loves Only You
Without You
Hedonism
This Means War
Intellectualize My Blackness
Yes It’s Fucking Political
Tear The Place Up
Secretly
What You Do For Love
Highway To Hell
Skank Heads
Little Baby Swastikkka