Die Ego / With the mouthwatering excellence of Culto, the Cart & Horses gig is hot ticket

Die Ego have released their superb debut album Culto and will be hosting an evening at the famous Cart & Horses in Stratford on Saturday, 9th July, with support from Enquire Within and Halberd. Diego Fardel (Lead Guitar) and Edoardo Mariotti (Drums) spoke with MetalTalk’s Steve Ritchie.

Die Ego refers to the death of the ego, not a play on the guitarist’s name, and Culto is a really strong debut, packed with eight superb riff-based Heavy Metal tracks and not a filler in sight.

Ready to release before the Covid-19 shenanigans, Diego, Edoardo and Gabe Scapigliati (Vocals and Bass) presented the album live at The Dev late last year and are now ready to go full throttle in Stratford. 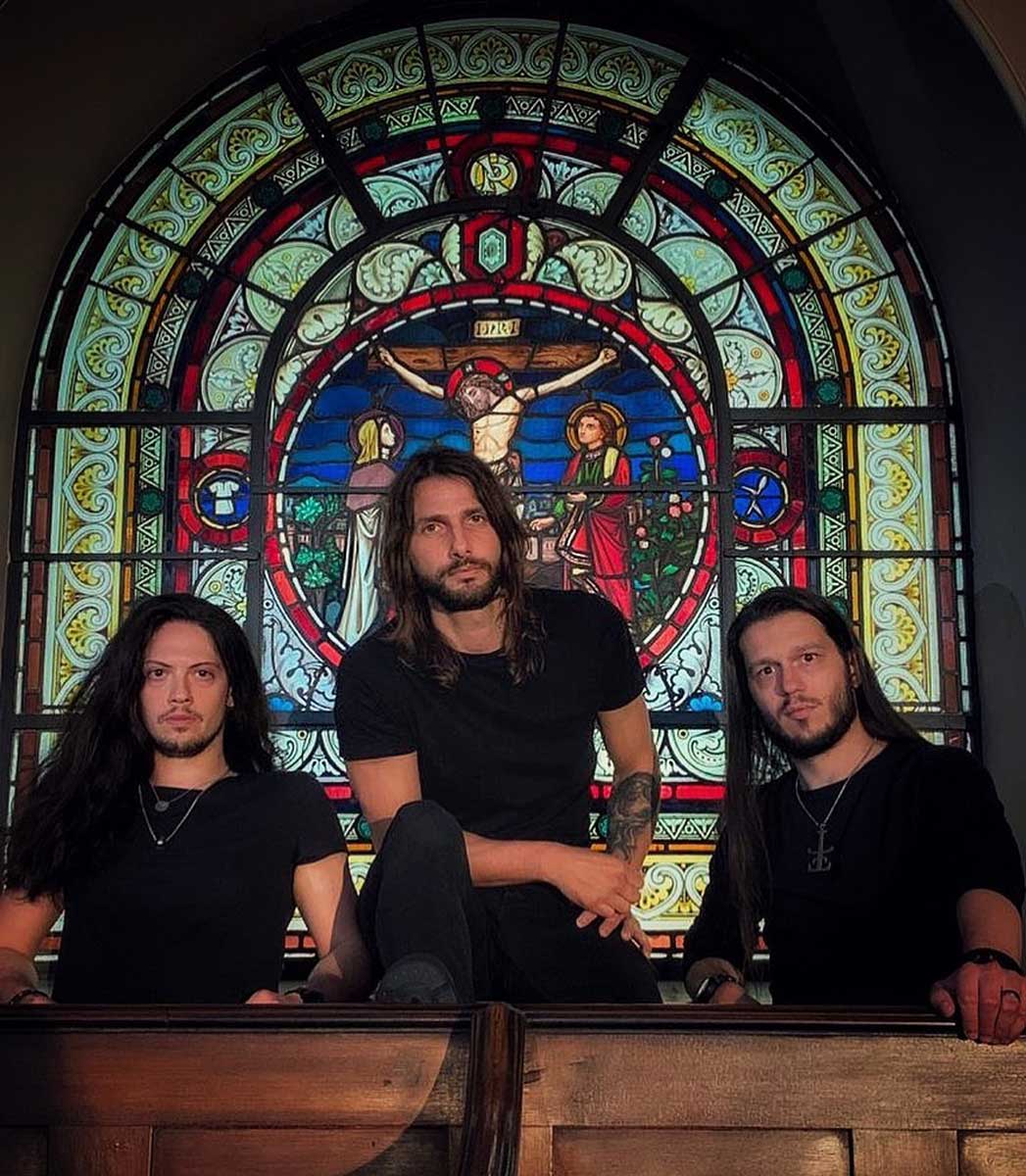 Die Ego have released their superb debut album Culto and will be hosting an evening at the famous Cart & Horses in Stratford on Saturday, 9th July, with support from

Die Ego have released their superb debut album Culto and will be hosting an evening at the famous Cart & Horses in Stratford on Saturday, 9th July, with support from Enquire Within and Halberd.

“I think the preparations are going very well,” Diego says, “and the set is absolutely bombastic. We’re gonna be playing the whole record, plus some little surprises. So we’re super excited to headline such an iconic venue, which actually is thankfully still open. We all know the situation of live music venues in London, and we’re glad that the place is still going strong.”

Culto is an exceptional album that would appeal to so many Heavy Metal fans and one thing that really drew me in while it was blasting my ears was the wonderful prospect of hearing this live.

“We have that mentality of having songs that we could actually play live,” Diego says, “especially with this power trio. You hear some bands where it sounds huge on the record and they are not able to put it out live. That’s why we only keep the bass and drums on the track when I go on a solo. We want to make it sound as close as we can.”

The first track, Culto, has a really atmospheric, wonderful opening, and I love the mix Die Ego have in both my ears. They really leave space for the bass and the drums and the guitar and the vocals.

“We were very happy with the production,” Diego says. “We did it in Rogue Studios in London, and our engineer and producer got very involved. He knew where we were going and the mindset we had. Every single instrument should kind of pop. We’re heavy. We want to keep the weight and the clarity of a melody.”

Demons Have Demons is terrific and should be an excellent introduction to the band if you have not heard them before. “It’s the one kind of ‘single’ track in the album,” Edoardosays, “because it’s got that big singalong, but the title is so memorable, and we use that live a lot.”

There Is No Tomorrow has a great intro which lulls you into thinking the drummer might get an easy ride on this song. But then it turns beautifully aggressive, with a superb melodic burst for first the solo confirming that Edoardo needs great stamina playing with Die Ego.

“I kind of had the same impression as you,” Edoardo says of the overall style of the album. “I wasn’t actually involved in the band in recording, so there’s no contribution on my side to this album. But when I listened to it the first time, I was impressed by the good level of production and the vocals. Treatment of Silence is one of my favourites, as is There Is No Tomorrow, which is one of the richest songs on the record. It’s not an easy one to play live, but it’s fun drum-wise and has this interesting and intricate beat.”

The Grave is another song with a big riff and is heavy as hell. There is a fantastic solo, and towards the end, I realised I was listening to a tale of horror, but listening with a smile on my face.

“You shouldn’t really be listening to a horror story with a smile on your face,” Diego says, “but Heavy Metal fans are like that. I’m the same.” The Grave was one of the first songs the band wrote, and here Gabe shows his great lyrical skills. “Gabe reads a lot of Lovecraft,” Diego says. “He always has lyrics, and for The Grave, he had that story already. I write lyrics which are more personal.”

The album finishes on I Promise, which is a thrilling way to finish, built around a wonderful riff. This track is a real showcase of the quality sound Die Ego have as a three-piece. During the guitar solos, especially in this song, you can feel Gabe enjoying the free reign he has over his bass style, not being tied down with the constraints of a rhythm guitarist.

There are some wonderful feedback parts of the solo, and it is constructed wonderfully. “When it came to that solo, it was originally a melodic passage with the guitar, very melodic,” Diego says. “The guys said this is not working.” The band went back to jam. “Give me the baseline and the drums,” Diego asked. “I approached the speaker cabinet, and I started making some feedback, which I thought could work. So that’s why the solos are in two different sections. The first one is more, can we call it psychedelic, with all the feedback going on and some delays? Then you have the melodic part.”

Die Ego are a wonderful riff-orientated band. The feedback for Culto has been very positive, with no bad reviews posted, and now they are looking forward to playing live again. “There’s a lot of people still discovering the band and the record itself, which is what pushes us to go out there and keep playing these songs,” Diego says.

Edoardo has been with Die Ego since the summer of 2021, and they have been working on some new material. “The new material is sick,” Edoardo says. “It’s really, really amazing, and I’m super excited for the material to come out.”

“From a sonic perspective, it’s a bit heavier,” Diego says. “It has got more weight. I think we grabbed everything that we did with Culto, and we took it to another level.”

But the Cart & Horses gig is a celebration of Culto and the return of live music, and that will be Die Ego’s focus for the evening. “Thanks for listening,” Diego says of their Heavy Metal fans. “Thanks for being there and supporting us. That’s one of the main reasons why we’re doing this.”

With the mouthwatering excellence of Culto, the future for Die Ego should be a golden one and one I will certainly be keeping a keen eye on.

Previous articleRival Sons are writing their own story, epic chapter by epic chapter
Next articleHellfest 2022 / all eyes and ears await Guns N’ Roses on Saturday night

Erik Mårtensson / “There easily could have been eight Nordic Union singles”