The big recent Kiss news is that Gene Simmons is releasing a 150 song, 10 CD boxed set of his demos over the years. He calls it “the greatest boxed set of all time”. 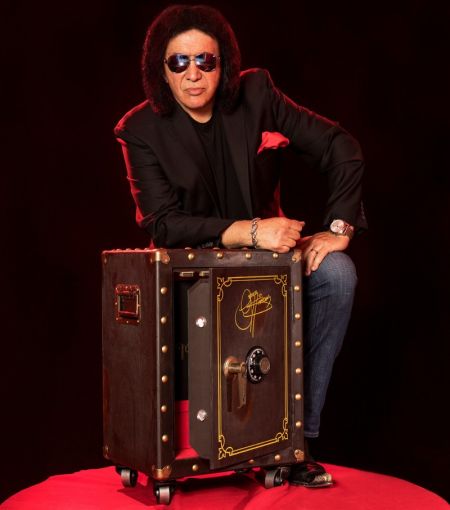 It is flight cased in a bank vault, it has a lavish book, a medallion, an action figure and everything else that you would expect in the greatest boxed set of all time. It won’t be available by normal routes but only by personal application through GeneSimmonsVault.com for between $2,000 and (including personal delivery from Gene Simmons himself) up to $50,000!

Gene talks at length in several interviews about his marketing strategy for this high end piece of KISSSTORY. He talks about the construction of the flight case, the options for high payers to visit him in the studio or for him to visit them but he has been decidedly vague about what’s exactly included on the discs.

We do know from Gene’s interviews that his legendary ‘Love Gun’ era demos featuring the two Van Halen brothers are included. They’ve not been heard by fans before and will be cool to hear.

He said a song he wrote with Bob Dylan is on there. We’ve not heard that before but I’m personally not a massive Dylan fan. Gene has also mentioned that the first song he wrote as a teenager, ‘My Uncle Is A Raft’ is on one of the discs.

Are there any unheard Simmons/Stanley duets? Is there a Bob Kulick ‘Naked City’ demo? Are there any writing sessions with Vinnie Vincent on there? Did he start recording ‘The Elder II- War Of The Gods’? Or more worryingly, is it all just full of the dozens of Gene Simmons demos that have already been commonly leaked in collectors circles and online for years?

Luckily some very keen-eyed Kiss fans spotted a glimpse of the tracklist for CD1 on one of the promotional videos made for the release. Kiss uber fan and author Julian Gill brought it to mine and the world’s attention on social media. 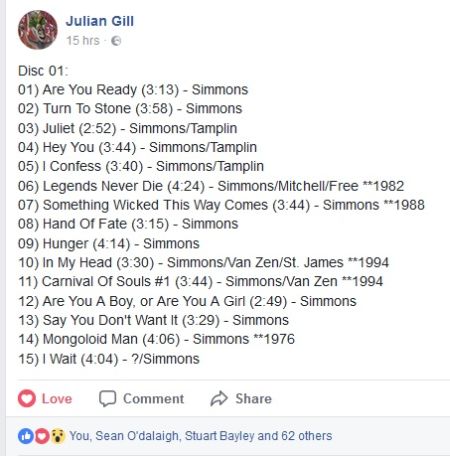 So what do we know of these songs and are they just the same old stuff we’ve heard before? Let’s look, song by song.

A very useful website for this topic is KissMonster.com which has a quite full list of all the known recordings that the band and their members have made over the years. Again Julian Gill is a helpful and regular contributor. Julian’s series books on the ‘Kiss Album Focus’ are also highly recommended reading on this topic.

1. Are You Ready? (Simmons)
The CD booklet seems to say that this is a 1986 demo, yet KissMonster says the demo was recorded with Gene, Tommy Thayer and Eric Singer at a later date. It is possible that the song was demoed more than once. Reassuringly however, this song has not been generally shared online by Kiss fans before. So at least the first song on the collection is a new one. Let’s see how this goes.

2. Turn To Stone (Simmons)
The KissMonster website lists this as a 1997 demo. Parts of the demo appeared on the soundtrack for the Gene Simmons DVD, ‘Speaking In Tongues’ in 2004 but aside from that the full song has not been leaked onto internet fan circles as of yet.

3. Juliet (Simmons/Tamplin)
Ken Tamplin is a very successful TV and film music writer and vocal coach, having helped Gabriela Guncikova of the Trans Siberian Orchestra and Marc Hudson of Dragonforce among others. He worked with Gene on a number of songs beginning in 1994 and later said of working with Gene:

“He is a hard person to crack the shell because I’m not sure if there is anything underneath except greed and a lust for power.”
(kentamplin.com).

As far as I know this song has not leaked onto internet fan circles as of yet.

4. Hey You (Simmons/Tamplin)
Another Gene and Ken collaboration from the mid-nineties. Again as far as I know this demo has not leaked onto internet fan circles as of yet.

5. I Confess (Simmons/Tamplin)
Another Gene and Ken song, this being the only one of the three that made it onto a Kiss album, in this case, ‘Carnival Of Souls’. This original demo version again has not leaked onto internet fan circles as yet.

6. Legends Never Die (Simmons/Mitchell/Free)
The song was written by Gene, Adam Mitchell and Micki Free (who later won a Grammy for his writing on Beverley Hills Cop) for possible use on ‘Creatures Of The Night’ in 1982. It eventually ended up on the Wendy O Williams album, ‘WOW’ in 1984, which was of course produced by Gene. The version on the Wendy O Williams album features Micki on acoustic guitar and Eric Carr on drums and it may be the same basic track as demoed in 1982. This demo, presumably in it’s original form with Gene on vocals, has not been generally heard by fans before.

7. Something Wicked This Way Comes (Simmons)
This is presumably the late 1980s Gene demo that has been circulating in bad quality in fan circles for some time. It’s quite a good song actually and I’m surprised Kiss never used it. The song was later recorded by Doro Pesch on her ‘Doro’ solo album, produced by Gene Simmons.

8. Hand Of Fate (Simmons)
This is allegedly a 2008/09 ‘Sonic Boom’ era demo with Tommy Thayer and Eric Singer. Again, it hasn’t turned up on the internet as yet.

9. Hunger (Simmons)
This is allegedly a demo from around 1986, though little else is known about it. It hasn’t appeared in fan circles before.

10. In My Head (Simmons/Van Zen/St. James)
Scot Van Zen was introduced to Gene by Ken Tamplin and Jamie St James was the singer of the band Black And Blue whom Gene produced, featuring Tommy Thayer on guitar. We can only imagine what demo they made in 1994, as it has not leaked in to fan circles yet.

11. Carnival Of Souls (Simmons/Van Zen)
The song was written and demoed for the album of the same title but was not included on the final released version. This 1994 demo has already been leaked on the internet. A later version of the song was also recorded for Gene Simmons ‘A$$hole’ album, featuring Richie Kotzen on guitar.

12. Are You A Boy, Or Are You A Girl (Simmons)
I don’t know of anyone who has heard this song before or has any information on it or when it was recorded. It may or may not be a good song but the impressive thing here is how many songs Gene has got that haven’t yet been leaked by fans.

13. Say You Don’t Want It (Simmons)
Again, I don’t know of anyone who has heard this song before or has any information on it.

14. Mongoloid Man (Simmons)
This is a legendary demo song that we’ve been waiting for years to hear. ‘Mongoloid Man’ was allegedly written by Gene and Joe Perry of Aerosmith. This demo was recorded by Gene, Joe and Michael Des Barres in 1976. Some of the original lyrics were later used on the Kiss song ‘Spit’ on the ‘Revenge’ album but the original 1976 song itself has until now not appeared in fan circles.

15. I Wait (Simmons)
According to the KissMonster website this is most likely a 2002 demo with Tommy Thayer and Eric Singer but as yet it has not leaked onto fan circles.

So, out of a total of fifteen songs that we now know to be in disk 1 of the Vault, only two recordings – ‘Something Wicked…’ and ‘Carnival Of Souls’ – have been commonly heard by fans and collectors before, although keen fans will be familiar with ‘Legends Never Die’ from the Wendy O Williams and Doro Pesch recordings. That’s not a bad ratio at all considering that there are tons of Gene demos online shared by fans already. If he can keep up this pattern of more than ten new songs across the ten discs, this really will be a collection worth hearing.

Meanwhile, as more rumours say that gems such as ‘Piece Of The Rock’, written with Vinnie Vincent Invasion singer Robert Fleischman, ‘It’s My Life’ (the 1982 version) and ‘Your Wish Is My Command’ featuring Ace Frehley’s guitar takes will be included, this is shaping up to be a very interesting collection indeed. It might be time to start begging my bank manager after all.