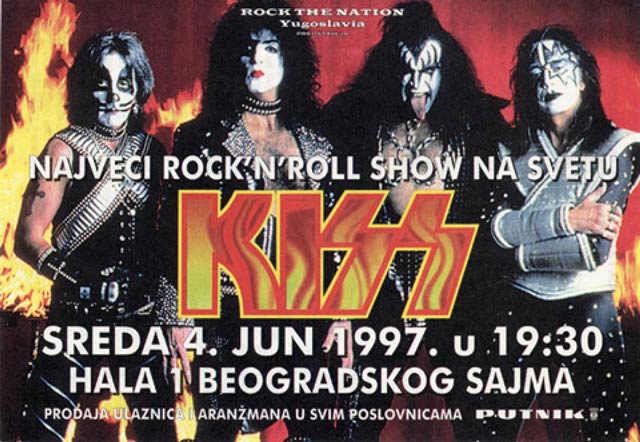 Were KISS kidnapped in Belgrade in 1997?

Ultimate Guitar website ran an article a little while back in 2017, where they labelled a tale about KISS getting almost kidnapped in Serbia on the 1996-97 Re-Union Tour as purely an urban myth which had begun with unsourced allegations on a Bosnian-Serbian press website a few years before (see links to both below).

I’m a pretty big KISS fan. I’ve read a million books, magazine articles and watched hours of interviews with them and those around them, but this story had never been mentioned before in any official or unofficial sources, until I came across a few pages near the back of the autobiography of one of their later years’ security guys.

Michael is Londoner, a Camden boxer by trade and seems an honest geezer. He has nothing to gain from this story. He was the personal security guy for Led Zeppelin in the late 70’s, Bon Jovi at their Slippery peak in the 80’s and on the KISS Re-Union tour of the 90’s.

As you’d guess, there’s a fair bit of Rock and Roll excess in his book, but I’m not going to spoil the plot for you other than to focus on this one KISS episode.

To read about the insane Bon Jovi party island or the bizarre time Ace Frehley actually shot himself you will have to go and buy the book yourself.

One of the things that makes this particular episode of KISSTORY of interest to me, is that it takes place in Belgrade, Serbia, shortly after the conclusion of the wars in Croatia and Bosnia.

Those of you who have read my ‘Scream For Me Sarajevo’ articles here on MetalTalk or have seen the film of the same name, will know that I too once got myself in a bit of hot water in the 1990’s in that region.

This was a time when the line between semi-organised wartime militia and well-organised peacetime criminal gangs was not very well defined in the Balkans, shall we say.

Those times are largely gone now and I can happily report that both Bosnia and Serbia are lovely places to visit these days.

Since my first visit to Bosnia in the dark days of 1994, I have learned a lot about Balkan politics and attitudes from my many friends there.

Of course, although Michael Francis was a very experienced security guy in 1997, having toured the world many times dealing with everything from death threats in the US to riots in Mexico, he had no experience of the Balkans and their own particular brand of danger.

Knowing what I know now, every time I turned the page of his book I could see how he was getting deeper and deeper into a mess.

In his book, Michael says that he was warned in advance that the Belgrade show on 4 June 1997 at the Sajam Hall 1, might be dangerous. In a well meaning effort to keep KISS safe however, he unwittingly exposed the band to a far greater threat than he could have possibly guessed.

His first response to the alert was to arrange for the band and their manager, Doc McGhee, to be flown straight in and out on their private jet, with no soundcheck, meals at the venue or meet-and-greets. Just fly in on the day, eat and prepare at the hotel, do the show and fly out right after.

This was probably a sensible arrangement, but his second move was an error based on his misunderstanding of where the danger lay. He assumed that the threat came from external forces such as rioters in the audience or possible terrorists on the streets.

His second move was his first mistake.

He demanded that the local promoter pay to hire eight local armed personal security guards for the band.

Now we all know that local concert promoters do not like spending their own profits on expensive last minute demands from bands, but luckily the region was rife with low cost ‘armed personal security guards’ at the time.

This promoter may well indeed already have been under pressure from different corrupt sides to choose one militia over another, but for whatever reason, the promoter hired (or was told to hire) a particularly nasty piece of work to be KISS’ personal local protection team.

If you mention the name ‘Arkan and his Tigers’ to anyone from that region, watch the reaction on their faces.

Even by the genocidal standards of the Bosnian War, Arkan stood out.

He and his militia gang known as the ‘Tigers’ (he also had a real pet tiger as seen above) went on a horrific spree of ethnic murder, torture and organised rape across Croatia and Bosnia between 1991-95. He was already wanted by Interpol for a series of violent armed robberies in several Western European countries before the war began and he was soon indicted for numerous Crimes Against Humanity by the International Criminal Tribunal in the Hague for his wartime activities.

And so it came to pass, that Arkan and his heavily armed Tigers came to greet Michael, Doc and KISS from their private jet at Belgrade airport and escort them into town.

In the book, Michael mentions how charming Arkan was. They chatted about their family lives back home.

Michael and Arkan had also arranged in advance that the band would be isolated, with only their personal security to be nearby. Nobody else was allowed access to KISS at the Intercontinental Hotel where they prepared for the show. Nobody else was allowed backstage at the venue or to travel with them. No local crew, no fans, no press and no venue or hotel security even.

This should have made them extra safe, but was in fact was their second mistake. As you can probably see by now, the danger was not from outside but within their nicely enclosed entourage.

They had effectively arranged their own kidnapping.

The show itself went well by all accounts, then Arkan and his Tigers took the band, Doc and Michael to the airport in a couple of transit vehicles.

All was going to plan. Not to Michael Francis’ plan however, but to Arkan’s.

When they neared the airport shortly before midnight, they saw that all the lights were off. The airport was closed.

Oh dear! How had that happened?

It says something for Arkan’s influence that he was able to shut down an international airport, even a relatively small one late at night. Yet this part of the story is corroborated not only by Michael Francis in his book but also in the Bosnian website piece.

Instead, the band and their small entourage were driven to a hut near the airport and told to go inside and wait. Anyone familiar with the story of the genocide of the Bosnian War will know that there are only two possible outcomes from this situation.

Michael says that Arkan called him outside for a quick chat.

Apparently, Arkan’s previously friendly facade dropped instantly as he made it very clear to Michael that nobody would be going anywhere unless a cash sum was paid on the spot. And I don’t think he meant that their flight would simply be delayed until tomorrow afternoon.

Michael went back into the hut and told Doc what the situation was.

Doc agreed to pay whatever they had. Between them they gathered what Michael says was around $2,000 in cash.

The Bosnian website alleges 5,000 Deutsche Marks was paid, which was roughly equivalent at the time, seeming to again independently corroborate Michael Francis’ story.

From Arkan’s point of view, this was probably less than he had hoped for, but elongating a hostage crisis would be more trouble than it was worth, so he took it as a quick bit of cash in hand.

And as if by magic, the airport opened a few minutes later and KISS went on their merry way to Rock and Roll Over the world…

But I do wonder why this story has never been revealed in official KISSTORY?

It seems unlikely that an English security guy and a Bosnian language website conspired together to make up the same story and it is also entirely fitting with the methods commonly used by Arkan and similar Balkan crime-lords at the time.

I myself have had the distinct displeasure of being inspected on the roadside by armed Serbian militia. It is not something you’d forget easily.

Maybe the KISS members were kept unaware of the gravity of the situation or maybe it is something they would rather not talk about? Was it traumatic for them or perhaps being outwitted by a bandit does not fit with Gene’s on-going narrative of the clever businessman that he is?

Either way, with a first hand account in Michael Francis’ book backed up independently on several details by a local source, I’d say on balance that this event probably did actually happen.

Arkan never stood trial for this or any of his many other civil and war crimes.

In 2000, in an interesting final little twist to the tale, he was gunned down at the Intercontinental Hotel in Belgrade.

The same hotel he had recommended to KISS three years before.

Star Man: The Right Hand Man of Rock and Roll by Michael Francis (2003)

The Award Winning Documentary Film ‘Scream For me Sarajevo’ www.screamformesarajevo.com

Thanks to Greenie Green (for recommending ‘Star Man’ to me), Trevor Gibson (for verifying and tidying up my sloppy prose) and Nenad Kovacevic (for also confirming details to me).

Previous article
Susan Santos / Soaked in soul and bite
Next article
Garagedays / Back to their roots, but with energy fresh and new