Steve Hackett has always been known for the wonderfully fluid and expressive guitar work that he has brought to both his recordings with Genesis and his prolific solo career. In this, his long-awaited autobiography, he shows that he has a great flair with the written word too, his prose painting a vivid picture of a life lived in the pursuit of musical excellence.

Steve Hackett – A Genesis In My Bed (Wymer Publishing)

Whilst some similar music-based autobiographies drag in their early sections, making the reader eager to get to the ‘meat’ of the book, here Hackett brings post war London to living and lyrical life in a warm and fascinating way. This is no rose-tinted view of a changed world, but more of a time where the events of 1939 to 1945 left scars on both the landscape and minds of all of lived through it and the immediate aftermath.

Those scars were still very much visible when the guitarist was born, five years after the conflict ceased, but in a childhood that was peppered with adventures and misadventures there is as much bright colour and excitement as drab greys and blackness.

From his times of youthful skirting of criminal elements, harsh times at school and the family emigrating to Canada, the pages are full of incident, all described in a way that draws the reader in from the opening sentence. As with the best writing, this makes you care about the subject, taking you on an unstinting journey with Hackett as he finds his way through a life that appears to be a different and much harsher world from that enjoyed by some of the fellow members of Genesis.

From his first dabbling in making music with a much loved harmonica, through to the seismic effect of early Rock and Pop by Duane Eddy and Martha Reeves & the Vandellas and a huge love of Blues we see the blooming of a talent born to use his gift to entertain, seeing it not just his way out of a potentially drab life, but as something ingrained into his very DNA.

His time with Genesis is well covered, the period of his career where he came to public prominence both fruitful and yet at times frustrating, as his talent was both recognised but ultimately somewhat stifled. We follow them throughout the increasingly successful tours and albums, Hackett’s input being such a major key to their success, his friendship with Gabriel in particular illustrating how the pair brought a new level of musical and visual splendor.

As with the rest of the book, this section is free of needless sensationalism, providing an honest but not lurid portrayal of his time with the band and as such those seeking gossip column exposé of nefarious deeds should look elsewhere, the six stringer ever the gentleman.

This is not to say that the book lacks incident as it most certainly does have dabbles with drink, drugs and bad behavior. These are spoken about with candour and humour, never preaching but as a review of salutary lessons learned and experiences had.

A soul always searching for new things and pushing himself, sometimes willfully without fully thinking things through, we join Hackett as he talks about spirituality of all kinds and follow the rollercoaster ride of his various romantic entanglements, each bringing new layers of colour to the rich palate of the story.

We make our way through his solo catalogue and, like the best of autobiographies, it encourages the reader to dig out those recordings or dive deeper and in a bank balance threatening move, invest hard earned cash into gems you may have missed.

Whilst the tome may be a little on the light side at just shy of two hundred pages, it is nonetheless a very good read and you come out with a better understanding and greater appreciation of this most English of guitar heroes who, whilst arguably not getting the plaudits of some of his peers, has brought some of the most sublime and creative material of the past five decades to life.

You might be initially attracted by his talent, but it is the measure of the man that leaves the biggest impression and ‘A Genesis In My Bed’ explores that in just enough detail to prove a greater itch to delve deeper by way of his music.

Still playing sold out tours, Steve Hackett is a rare talent and one most definitely to be cherished.

Steve told us earlier: “It’s often revealing. There’s lace, loves and butterflies, and I explore personal feelings. I’ve answered many questions fans asked over the years too, such as why I left Genesis. It’s taken fifteen years to bring this book to fruition, writing between tours, recording and legal challenges, but that’s given me time to really develop it.” 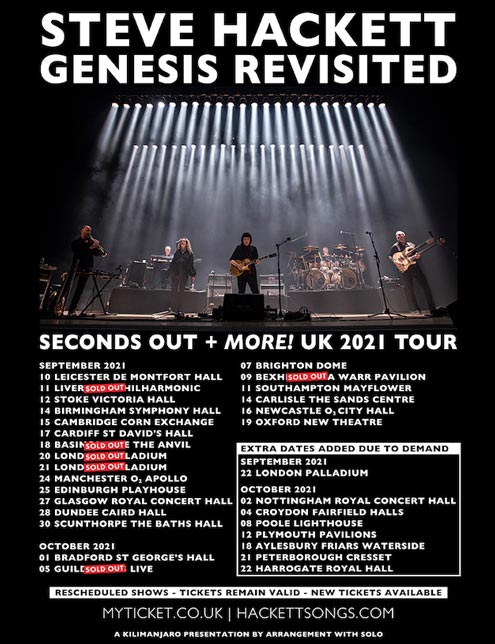