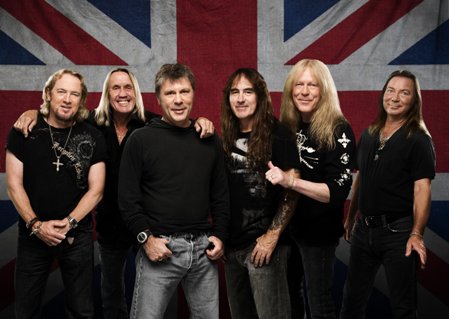 Legendary British Heavy Metal band Iron Maiden have been announced among the winners of the prestigious O2 Silver Clef 2015 Award for 2015.

At a launch event attended by more than a hundred guests at The Club at Café Royal in London last night ,Monday 23rd March,, glasses were raised to celebrate Iron Maiden as well as the 40th anniversary of the Nordoff Robbins’ charity which has raised more than £8.5 million to fund its ground-breaking work with music therapy.

Iron Maiden received the award for Outstanding Contribution To UK Music, in recognition of them being one of the most globally successful and influential rock bands of all time, having sold over 90 million albums worldwide and played over 2,000 concerts in 59 countries to date.

After being announced as winners, the band said “Nordoff Robbins is an exceptional charity and their dedication to changing people’s lives through music therapy is something we all very much support.

“We’re extremely proud to receive the O2 Silver Clef Award and be part of the 40th anniversary event celebrating this wonderful achievement.”

The very first Silver Clef Award was presented to The Who, by Twiggy, on 29th June 1976 and those since then, Jimmy Page, Eric Clapton, Pink Floyd, Pink Floyd, Status Quo, Genesis, Deep Purple and Queen have been among those honoured.