MetalTalk can this morning exclusively reveal that Iron Maiden’s Steve Harris is teaming up with Chas Hodges of Cockney duo Chas N’ Dave for an eponymous album called ‘Any Old Iron’ which will be released in the late summer. 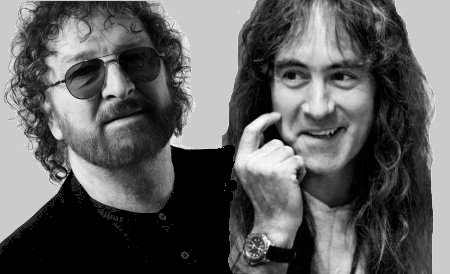 This surprising move came about due to a lifelong friendship between the two parties. Steve became a fan of UK band The Outlaws, who achieved some success in the 60s. The Outlaws featured Chas on piano, Ritchie Blackmore on guitar and Mick Underwood on drums who was later to become beatkeeper for Gillan. Current Iron Maiden guitarist Janick Gers was a prominent member of the Gillan band after he replaced Bernie Torme.

The ‘Any Old Iron’ project first came about when Chas N’ Dave bass player Dave Peacock returned to the band in 2011 after retiring in 2009. While Dave was in retirement, Steve Harris helped his old mucker Chas out by filling in at a few low key club gigs in the London area.

The pair discussed making an album one day and now this exciting project has finally come to fruition.

Steve Harris told MetalTalk: “A lot of people have said that my ‘British Lion’ solo album was in a similar style to Maiden so when Chas rang me up and encouraged me to get going on our album, I was all for it. It brought me back to me East End roots.

“We did a couple of club gigs which were great fun and fortunately there were no Maiden fans there so I wasn’t recognised. The locals just thought I was some long haired ‘erbert.

“We went down to Margate to see Chris Tsangarides who has a studio nearby and we recorded it in one week. It was a lot of fun and a totally different experience to making an album with Maiden.”

And MetalTalk can exclusively reveal the tracklisting for ‘Any Old Iron’.

Steve Harris has exclusively given us the lowdown on some of the tracks: “‘Barking Mad Five’ – when I used to go out in Barking in the early days, me and my mates would get up to mischief in the boozers and we got labelled the Barking Mad Five. ‘Jellied Eel Roll’ is the first song that Chas came up with and it’s a great swinging boogie-woogie number.

“‘The Italian Job’ came about when we were first in the studio and I had my amp turned right up and it almost made Chas Mutt and Jeff and he kept quoting the famous line from the Michael Caine film: ‘You’re only supposed to blow the bloody doors off’.

“‘Hampton Wick To Hampstead Heath’ is a story that the Maiden road crew can relate to and I will say no more than that.

“‘Rock N’ Roll’ is not the Zeppelin song but is actually all about my mate who is constantly skint and ‘Hurry Up Harry’ came about after one recording session when I was packing up my gear and Chas was bursting to get down the pub and he started plonking away the old Sham 69 song on the old Joanna and it sounded great so we kept it.

“The bonus track ‘Flight Of Dickarus’ – well I’m a bit of a shy guy and it’s just me letting off a bit of steam in a tongue in cheek kind of way.”

Steve added: “We will be doing some surprise ‘pop-up gigs’ once the current Maiden England tour ends at Sonisphere on 5th July.

Chas told us: “We went down well at Knebworth in 79. Not surprised we got a return booking.”

Previous article
GORKA ELSO AND ZUBEROA AZNAREZ: IN CONVERSATION ABOUT DIABULUS IN MUSICA
Next article
HALESTORM