Paul McCartney performed an original song with the three surviving members of Nirvana on Wednesday night at the 12-12-12 Hurricane Sandy benefit concert. The musical collective wrote the song ‘Cut Me Some Slack’ during an impromptu jam session for Dave Grohl’s upcoming Sound City Studios documentary, later debuting the track live at the televised benefit. 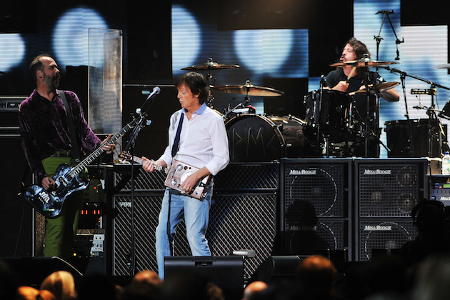 Although the song proved to be impressive to say the least, Courtney Love went public beforehand to say that she was against the idea. Love told TMZ that she was “not amused” by Paul McCartney’s involvement, although she added: “Look, if John [Lennon] were alive it would be cool.”

Shortly after the performance of ‘Cut Me Some Slack’, Courtney Love posted a long series of comments on the Facebook page for ‘Everybody Loves Our Town: An Oral History of Grunge’, which had just posted about the aforementioned TMZ article. Below is a compilation of her comments.

“funny we got asked to tour with alice in chains no disprespect to jerry as hes a n absolute gent but wasnt that,,, i mean isnt layne DEAD? sorry i had to pass maybe im old or pure or somes–t but wow.”

“anyone ever read the former strangers dana giachetta book”youw ill make money in yourr sleep” its so beyond full of small numbers and she misses the grander point it sold about 8 copies, 4 to me and 4 to a famed hotelier out here i dated and am dear friends with. hmmm whats in that 2030 kimit sub pop nirvana package jonathan i was with you the night before you went to see mr geffen to acquire that 5% of kurts pub but its apparently inc llc and partnership too , cmon show me, fine get a supeona. glad i coudl help refinance the soho hotel in nov 94 not july emily ever been on property shark? its called research!”

“i was playing cheap tricks first album in chrinocologal order to get my sib oop single of the month anyone says othrwise is disguting, is that richard lee still at it, i talked to chris cornell and he hates seattle too, i cant deal, the only time i felt anything was when i had a spitirtuL ephihany singing “jeremy” at bumbershoot i hope you liked it cos i saw ghosts for the first time,”

“accuracy is my middle name. watch homeland when clare danes is right, trust me i have cried on the occasions the lawyers have promised theyd go for it and the fbi this time is different its federal.”

“but i wont cry this time, i only care about his familty and bean and thats the f–king fgids truth any penny i get back is going inti a charity that prevents mortaage fraud and this happpening to anyone again, taking down the a=gates llp empire would be nice but im not stupid it wont happen n this life, not from me im not the messenger there some day though.”

“yall got good copy now ill leave it up a few then ill delete,”

At the time of writing, the comments had not been deleted…