When you’re a freelance backline technician like me, its similar to any other self employed job. You take what you can get and you do what you’re asked irrespective of who the client is.

For example, a plumber will accept a job cleaning the drains at the local zoo’s elephant enclosure but he’d probably be happier putting in a new bidet for Kerry King.

Sometimes I get offered an interesting tour. Sometimes not so much but it’s all the same to me really. Either way, I unload some cases, set up some equipment and tune up some guitars. After that the band can play whatever they like through it all and I’ll pack it down when they’ve finished.

I have no problem with that and besides, most bands are actually quite fun to work for once you get to know them.

Then one day out of the blue, I got recommended to work on a tour as bass technician for Billy Sheehan. He’s the guy that was in Mr Big and David Lee Roth’s band. If like me you’re lucky enough to be a bass player, then you’ve already heard of him. If you’re not of our blessed breed, allow me to educate you. He is quite literally and with no exaggeration or doubt the most incredible rock bass player of the last 30 years. Have a look at this:

He was also one of my heroes when I was a youngster. I literally spent years locked in my bedroom, trying to work out some of his basslines. I didn’t succeed, but I tried an awful lot.

I always dreamed that if I ever got a chance to meet him face to face there’d be so much I’d want to ask about; his three fingered picking technique, his use of tapped harmonics or where he learned this all from. The first thing I wanted to know though was exactly how he got his unique bass sound.

I’d read loads of interviews with him in music magazines where he explained his sound but I never really understood the nuts and bolts of it. As a backline technician the first thing I have to ask any musician that I work for is how they want their gear set up and how they want it to sound. This tour was going to be great fun, I would get to ask all my questions and especially the big question and he would have to answer in as much detail as I wanted to know!

We first met at a pre-production rehearsal day in Zoetemeer, Holland the day before the Devil’s Slingshot European tour kicked off. The band was Tony MacAlpine on guitar and keyboards, Virgil Donatti on drums and the aforementioned Mr Sheehan on bass.

They are all incredible musicians. The three of them had just finished another tour as Steve Vai’s band. I learned so much seeing how they worked over the tour, watching the gigs and just in casual conversation with them. I could write columns on all of them but never understand them fully. Sometimes it was like talking to aliens who are trying to explain to you how simply their time-warping anti-gravity drive system works.

Billy was a pleasure to work with and that first day he went into great detail about his equipment and sound but all in a fairly casual way. I was fascinated. 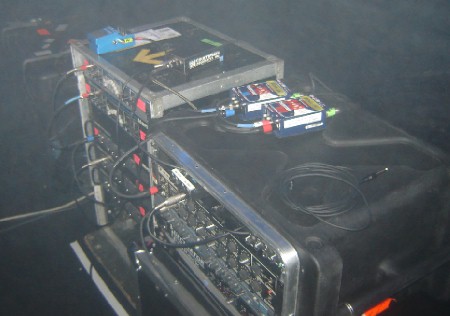 So it seemed that my job on tour was to make sure his basses sounded great through his rig every night, set it all up, clean it all up, change some strings and then stretch them in. That meant playing with his basses all day long. As a bass player myself it was a treat. As a fan it was a dream.

Each day I’d play through his rig and check it all out. Is there quite enough grind there? Will it keep tune if I bend the strings up a tone or two or three? (His basses play so beautifully). Do the harmonics scream out today? Do the lows rumble my colon? If the answer to all these questions was yes, all was good. 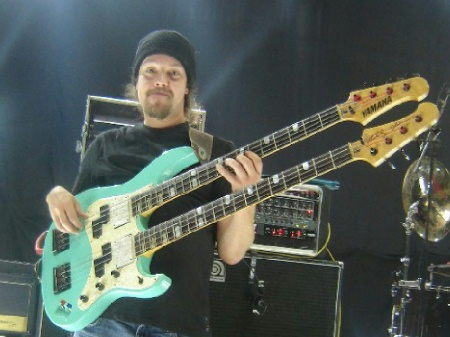 Yours truly with one of Billy’s crazy basses

Billy and I got on very well. We both like watching Family Guy and Peep Show. We both like discussing bass playing and politics into the small hours of the night to the gentle clinking sound of empty bottles swaying on the tour bus. He’s intelligent, well read and a very funny guy. His tales of the road would make a whore blush and a vicar wet himself. You’d like him.

As a bass player myself, watching Billy play every night close up was like an intensive bass course for six weeks. It was very inspiring and just made me want to practice more. There’s nothing this guy can’t do. He can pump and groove like Bootsy, solo like Eddie VH but on bass or lay out vocal harmonies like Paul McC.

Some of the playing I’ve seen him do, I still don’t understand to this day. Other parts of it I just started to understand as we went along but there was always this one annoying lick that he did in the set on that first tour that I just couldn’t figure out. I heard it night after night. I even filmed it some nights and watched it back on my laptop in close-up on his fretboard with his spare bass in my hands but still I had no idea how he was doing it.

So one day in Belgium, I thought I should really just take advantage of my job position and knock on his dressing room door.

He’s been playing long enough now to have what most people would consider to be mastery of his instrument but he still practises all day, every day, if he can. Pretty much, leave him in a room with his bass, a practice amp, sustenance and a camp bed and he will be happy.

He told me once about the theory of a plateau of learning. When somebody learns a new skill they rapidly soak up information to begin with until they are adequate at the task. Then their learning curve naturally plateaus off as they become comfortable with their ability.

For example, most people learn to drive a car in a few weeks, then once they have the ability to get to work and back without hitting too many obstacles along the way they don’t get a lot better over the next few decades. Not many people go on to be advanced stunt car instructors or professional racing drivers. This is because it is hard to break through the plateau of learning.

It is the same with musicians. Most musicians learn their instrument to a level with which they are comfortable then don’t stretch themselves much further over the coming years.

So when I dropped by the dressing room that day Billy was, of course, practising on one of his basses. I had the other.

“Sorry to interrupt mate, but you know that sweeping arpeggio type thing you do in unison with Tony? How does it go? Can you show it to me?” I asked.

He paused for a second and said, “I think its like this…”

A blur of sixteenth notes followed.

Another blur of notes.

Eventually he played it slowly enough for me to figure it out, sort of. I had it very roughly and very slowly. This lick was going to take months or possibly years of practice, I thought. At the time I didn’t know how many years.

If you’re a bass player you’ll notice that this is physically impossible to play as 16th notes. If you’re not a musician, you’ll think I’ve misunderstood the basics of Sudoku.

“Or if you want to do it in a minor key it’d go like this,” he offered along with a further blur of notes. He was up to full speed again.

“And if you want to tap a few more notes at the top you could go like this”. More flurries of notes passed me by.

I think that’s the point though isn’t it? Not everyone can do it. If they could, they would and Billy Sheehan wouldn’t be a household name (if your household is full of bass players).

That first tour I did with him was five years ago now. I’ve worked with him a lot since then all over the world and although we’ve shared some great times I have to say that I still can’t play that one bit he showed me on the first tour anywhere near up to speed.

Billy is currently working with a new band called Winery Dogs with Richie Kotzen and and Mike Portnoy. Their self-titled debut album is out now. They play the London Islington Academy later this week on Thursday September 5th.