With the outdoor festival season drawing towards a closure, it was the start of the indoor mini-fests and there was no better way than to start that than with a good old fashioned knees up with five names from the New Wave of British Heavy Metal movement (NWOBHM) at a venue whose bar prices are not far off what they were charging back in 1979 as the scene was beginning to burst. 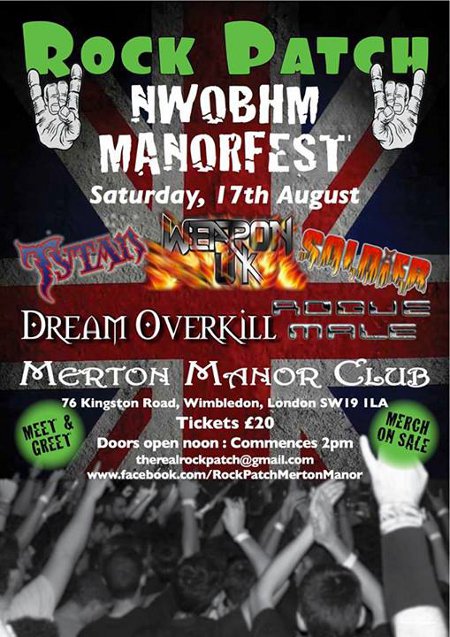 Sadly, despite the best efforts of the promoters, the attendance figure was one you’ll expect to find on a Bad News documentary, however the enthusiasm of both bands and the fans ensured that everyone was going to have one helluva night.

Even Metallica’s Lars Ulrich was there in spirit by sending a goodwill message the day before which read: “Sending best wishes from all at Metallica to Weapon-UK, and all the bands taking part in tomorrow’s show…….Have a great fucking metal time and thanks to all of you for helping start the great movement that is, and alway’s will be, the NWOBHM. Lars”. How cool is that!

Dream Overkill opened the event and what a surprise they were. Originally called Overkill and later changing their name to avoid confusion with the American thrash band of the same name, Dream Overkill are veterans of the Reading Festival having played there on the opening day back in 1982 in a night headlined by Budgie, with Iron Maiden and MSG topping the other two nights.

Why this band never made more than just a single is astonishing as their material was full of top notch original quality full of deep hooks and musical styles that went against the grain of many of metal bands of the day.

Father like frontman Mike Fowler had a friendly demeanour kicked off with ‘How Does It Feel’ followed by the highly impressive ‘Battle Song’ which had a killer march like bad ass riff. The metal theme was alive and well with tracks about Odin and Thor. The single ‘Elemental’ was a real treasure and the first song they ever wrote ‘Out Of My Head’ had the right title for the state I would be in by the end of the evening. An excellent set that raised the ante for all the bands that had to follow.

Not that Rogue Male are scared of a scrapheap challenge. Although not a NWOBHM band strictly speaking as their debut ‘First Visit’ was released to an unsuspecting world in 1985, these animals were a welcome addition who tore the Manor Club a brand new arsehole with their ferocious set.

Rogue Male took no prisoners starting every song with an apocalyptic ear bashing crescendo before going out with all guns blazing in an assault to destroy everything in their path. Jim Lyttle and John-Fraser Binnie are like two wind-up toys with Duracell batteries rammed up their backsides performing as if they were at the New York Madison Square Garden showing W.A.S.P how it’s really done. New bassist Tony Forsythe may be wondering what he’s let himself in for but looked to be relishing the challenge. 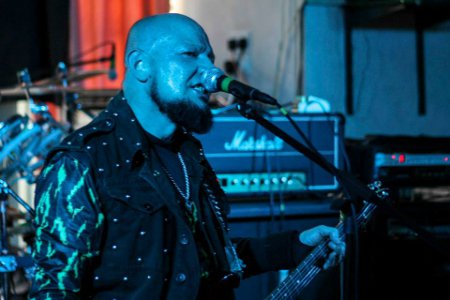 Lyttle was a man possessed, snarling away and giving a mean look, all delivered with tongue in cheek humour as they ripped the place apart with with anthems such as ‘Take No Shit’, ‘Crazy Motorcycle’, ‘Dressed Incognito’ and a storming ‘All Over You’ ending with the new track directed at No.10 in ‘Liar’. Rogue Male shot their load all over the Manor.

After the nuclear blast that had just swept through the Manor Club, it was understandable that Soldier looked to be a little shell shocked , however they soon got their armour together to do the job required of them. Original Ian Alan Dick led his troops through a solid display starting the set with some golden oldies in ‘Infantrycide’ and ‘Strom Of Steel’. Guitarist Miles Goodman was using his Flying-V as a launch missile, whilst singer Richard Frost was happy to take cover behind the gunslingers. 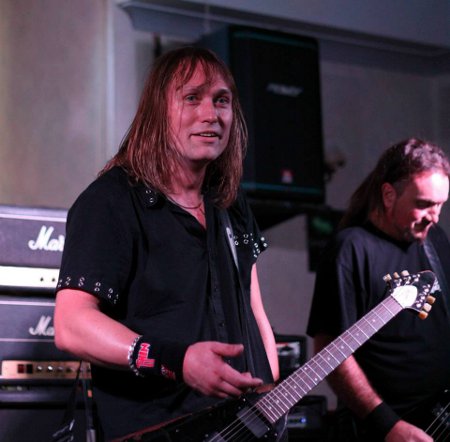 Soldier were using the Manorfest as the official launch for their new album ‘Dogs Of War’ which built up the bulk of the set. Songs such as the title track, ‘I Can’t Breathe’ and ‘Bedlam’ are firm rigid numbers for lovers of traditional metal and a trip down memory lane with the classic ‘Sheralee’ ended the set on a high.

Weapon, or Weapon-UK, as they are now annoyingly officially known as, are regulars here at the Manor and by now the club was belatedly filling up with more punters. Singer Danny Hynes looked like an extra from the Brokeback Mountain film in his tight leather trousers and cowboy hat and he soon spurred on the crowd with the Eastern promise of the mighty opener ‘Ride The Mariah’ from the forthcoming new album. Another new track ‘Rising Skies’ has a fast thrashing riff from Jeff Summers that would do Hetfield & Co proud. 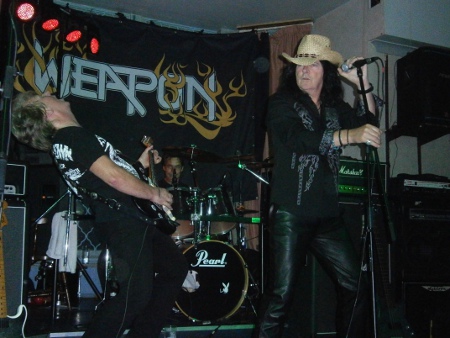 Halfway through the set, the copious amount of Jack Daniels I was consuming was starting to take some serious effect. Not only was I drinking doubles but I was also seeing double at every measure, so as soon as Weapon (Yes I know! I musn’t forget the -UK bit) finished a flaming ‘Set The Stage Alight’ I took the sensible step, well I couldn’t take any steps to be precise, and grabbed the nearest chair, held my head in shame and tried to restore some order in it.

To keep me alive and alert Tytan had to be something very special indeed and boy!, they didn’t disappoint. Opening with monk like chanting Tytan rode into ‘Blind Men And Fools’ and immediately they restored some sense of sobriety back into me. The sound they created was incredible all delivered with a clinical approach. 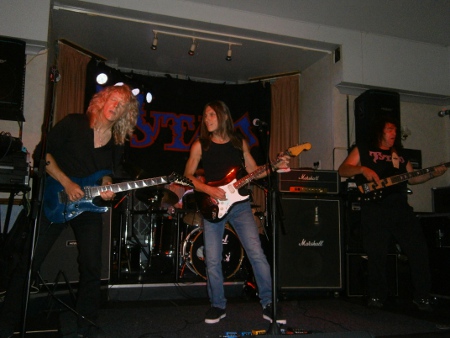 Kevin Riddles is a highly underrated bassist whose sound was reverberating through his whole body with a funky edge with a dose of progressive madness throughout. His playing was out of this world only coming back down to earth with his in between song banter where he reminded me of Les Dawson with his humour and manner.

Introduced as ‘Our Kashmir Song’, ‘Rude Awakening’ was exactly that with it’s riff like mantra destroying any usable brain cells left in my shaken skull. Steve Mann was away in a world of his own playing with a fluid passion. Keyboardist Andrew Thompson wasn’t just there for show as he added a hidden dexterity to the big sound without outstaying his welcome. Singer Tom Barna has a bewitching voice that leaves a spell on the listener leaving them totally entranced.

Simply put, Tytan were superb and proved themselves to be something very special indeed.

A cracking day out and on the strength of the music on offer here today, I sure hope there will be another Manorfest next year.

It’ll be a travesty if not, because many younger bands can be hugely inspired by what these largely forgotten bands had to offer. 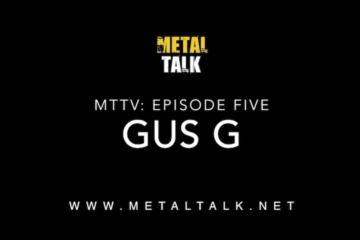