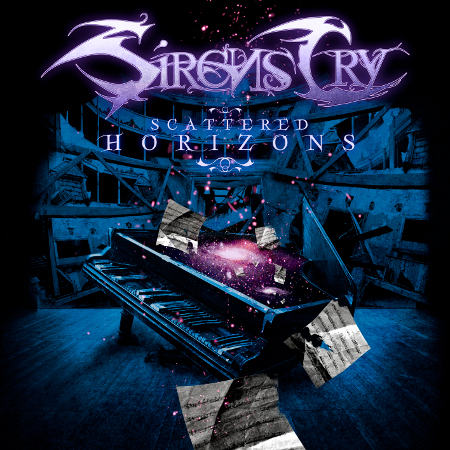 Containing a mere nine tracks, you may begin to raise some concern, but thankfully those nine songs are for the most part busy and engaging. Apart from an intro’ which lasts for one minute and thirty nine seconds and is pleasant enough for setting up the mood; it’s a journey of musical excellence with the remainder of the tracks on offer.

Swirling keyboard flurries like a group of butterflies fluttering on currents of air accompany some mean riffs as ‘S3V3N’ swaggers into earshot. Katie Joannes settles into the gathering momentum of the instrumentation with her melodic vocal lines and the power grows as they combine. Within this one track alone, there are hints of jazz, operatic and hook-laden vocal moments along with a choir-like vocal backing in places. It’s a grower as there’s so much to digest.

With my head and ears spinning, ‘Oratory And Sins’ bursts into life. It’s immediate to all that hear this album that the musicianship is top notch. ‘Oratory And Sin’ provides a hook and a more accessible structure with some fabulous keys from Michael.

With the looming dark atmosphere similar to the Omen movies, a male choir provide some stimulation to the listening experience in this track for a brief moment, but as with the predicating song there are twists and turns throughout.

The progressive nature of this group also means that they use everything and anything they can to reach their desired result. ‘Elegy of R’lyeh’ throws so much at the listening experience including a rough male vocal narrating for a brief moment before it’s gone, then a complex musical arrangement and a blast of blatant jazz interlude in and amongst the maelstrom of audio.

Joannes is still singing when the song fades out and makes me wonder if the original version of this song just continues for another twelve minutes, and someone in their infinite wisdom decided that the song was going to blow some brain cells at that full length version?!

A true highlight then knocks on the door in the shape of ‘Draconian Spectrum’ which sits amongst these tracks comfortably.

Something akin to digestible on the first few listens, and then gets better when you revisit more often.

I’m compelled to just throw my arms in the air and say that this is layered way beyond my comprehension and give up, but there’s something really interesting and addictive about ‘Scattered Horizons’. As a unit, Siren’s Cry retain strong melodies and moments of sheer beauty, but they act as stepping stones to other musical outbursts that all join like a dot-to-dot in such a novel way.

If you enjoy sitting down in your trusty chair, dim the lights and stick on a pair of headphones to listen to an album from start to finish, and you admire virtuosity and fantastic musicianship, this will be a genuine delight.

‘Cold Amber and Scalding Tears’ is the shortest song here and is a melodic masterpiece. Almost like a commercial break amongst the audio storm, a chance to take a breath before the soft and symphonic-style opening of ‘Sahara Sagas – Part I’. Incidentally, what have you done with ‘Sahara Sagas – Part II’? You can’t have a ‘part I’ without implying there’s a ‘part II’ lurking somewhere?!

Whilst I’m on a bit of a soapbox, is it just me that gets annoyed when you look at a track list and see an introduction/theme/instrumental bit listed in its own right, but when you listen to it, that titled bit goes directly into another song seamlessly? Why not miss out that titled bit and make the instrumental/theme/introduction just a part of the song that it flows effortlessly into and in doing so, you have one song title that gives a better impression to the potential fan of the music what is on offer?!

Back to the business in hand, and ‘Sahara Sagas – Part I’ is still going and has my ears overwhelmed as it clocks in at over nine and a half minutes. Progressive metal fans are going to lap this up. Some tasty riffing takes place at the start of ‘Serpents of War’ before making way for a little bass, and then a different riff springs up. This song gallops along with the prolific melodic vocal line gently riding on top.

‘A Controversial Mind’ signifies that we’re on the final straight. This song starts softly before building up the tension. This song has so much momentum and energy invested into it, with all involved injecting their focus and self-belief into it, you can’t help but smile. All of the personnel are given room to showcase their abilities, with no one instrument being cranked up louder than any other and this makes the album bearable.

They announce to those who seek them out on a popular social networking site, that they have three main areas of influence. There are soundtrack influences, classical influences and the more contemporary rock/metal influences. You understand once you’ve heard ‘Scattered Horizons’ why they have broken down such things into categories.

The scattered horizons they speak of with the album title are quite plausibly the many different styles and sounds, paces and vibes that have been melded together for all to hear? It was captivating and refreshing, blatantly complex and yet appealing simultaneously.

With three of the songs being easier to digest in the form of ‘Draconian Spectrum’, ‘Oratory and Sins’ and ‘Cold Amber and Scalding Tears’, it makes for a well paced album overall. Perhaps that was intentional, like these songs are moments to catch your breath before diving under the surface of their energetic progressive endeavours elsewhere?

If you have the time and are partial to progressive elements in your metal/rock collection, you could certainly do a lot worse than give these guys a listen.

Why So Many People Opt To Play Slots On Their Mobile