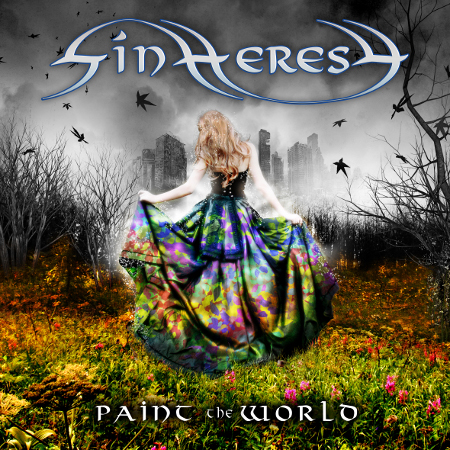 Hope you brought your passports? You and I are off to Italy with this album review to check out the talents from a mighty fine symphonic metal outfit. After creating some interest with their debut release ‘The Spiders and the Butterfly E.P.’ it’s now time for us to get a full frontal attack with their debut full length album!

Formed back in 2009, this six-piece provide a twin-vocal balancing act securing the male voice of Stefano Sain and the female vocal display of Cecilia Petrini. The musical backdrop is a powerful style of metal/rock and places their overall sound somewhere like Delain or Within Temptation wrestling with Children of Bodom, Symphony X or Kamelot. In other words, wipe away that saliva and let’s do this review.

Once in a while a band exhibit an ingredient which sets them apart from other bands in the same niche, and to my ears this band produced something a little special here. ‘Paint The World’ provides the listener with a really good flavour of what they can do, with the beautiful sweeping power ballad ‘Roses And Thorns’ or the opening drama that is ‘Last Fall’.

The latter of these contains a sense of urgency and races along nicely including a moment of symphonic elegance around the middle section, before producing a musical stage for a speedy guitar solo and then the song heads for the finishing line. The former is delightful as it skips and dances with self-control and precision.

The ten songs on ‘Paint The World’ complement each other, even if some are stronger than others. With song number two, ‘The Gambler’ strikes out right from the first chord, snapping jaws and snarling with a polished sheen. Hot on the heels is the arrival of the title track sounds distant at first before the drums and instrumentation kick in and we’re up and running again. This third track gives us a chance to soak up a different pace. A soaring chorus proclaims this song to be a commercial slant to their style, although they don’t compromise on the power or delivery.

‘Made For Sin’ comes and goes without latching onto the ear with an outstanding hook, but is still enjoyable. ‘Break Point’ begins with studio trickery before crawling out of the shadow to reveal itself in all of its gory glory. Halfway through it changes gear and riff, before settling into the groove once again of the initial pace of the song.

The remaining four tracks throw in various elements which keep the proceedings spiced up nicely. There’s an Arabic style lurking beneath the surface at the beginning of ‘Elua’s Gift’ and during ‘Our Angel’ we’re introduced to the band’s tender side as this song falls most definitely in to ballad territory. ‘Lost in the Shadows’ rocks and presents a satisfactory chorus.

Looking at the packaging for this debut album, the artwork and layout was tackled by a company called Nerve Design who are known for their work for bands like Nile and Threshold amongst others. Mixed and mastered in Sweden by Johan Örnborg and Jens Bogren, associated previously with their work for Soilwork, Opeth and Paradise Lost. Recorded in various studios located within Italy itself, the approach to this album has been one of typical professionalism.

‘Paint the World’ is a strong debut full length album and is going to hopefully open some doors for them as they go about their respective promotional duties. As I type this review for you, I’m also aware of two other releases that have landed in my inbox which also feature prominent female lead vocals that share in the same quality of material. 2013 is looking like another strong year for rock/metal.

ZUD: 'The Good, The Bad And The Damned'