Climax! Yes, the word can be given to the Metallica concert in Jakarta. As the last in the series of gigs in their Asian tour, Metallica get a great climax in Jakarta which took place at Gelora Bung Karno Stadium (GBK) on August 25th 2013 and was promoted by Blackrock Entertainment. 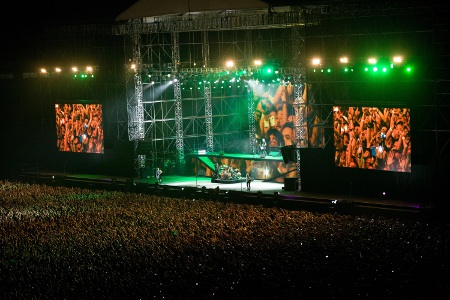 Attended by approximately 60,000 people, it was held at the legendary stadium with great stage, lighting and sound system with the power of hundreds of thousands of watts, 18 songs, and keep in mind that this is a Metallica concert with the 20-year-long wait for fans in Jakarta, Indonesia. The crowd did not stop singing along very loud from beginning to end. Yeah… very epic.

Before Metallica rocked GBK Stadium, at around 07.00pm Stadion GBK were rocked by opening local Metal band Seringai. Seringai bring some of their hits like ‘Serigala Militia’, ‘Dilarang di Bandung’ and also cover Motorhead’s song ‘Ace Of Spades’. Seringai also invite several other Indonesian musicians to collaborate on some songs.

After Seringai left the stage, the audience was boisterous and could not wait for The Four Horsemen. Jakarta crowd is very creative, while waiting for the crew to set up the stage and equipment, spectators were in the stands sitting amusing themselves by making mass Mexican/Body Wave as was done by the football fans in the stadium.

At around 8:30pm the sound of AC/DC’s ‘Long Way To The Top (If You Wanna Rock and Roll)’ got the crowd more excited because that song is like a code that the show will begin. And really, after AC/DC then ‘The Ecstasy Of Gold’ intro with Clint Eastwood video footage, from the movie The Good, The Bad And The Ugly on the LED screen on the left and right of the stage. The audience was hysterical creating a mass choir following the opening intro the Metallica concert. 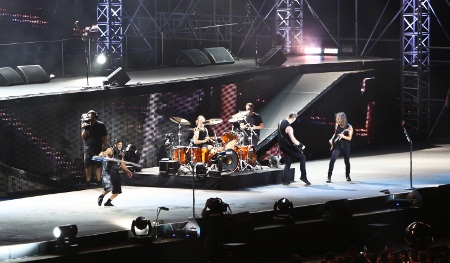 Metallica kicked off with the song ‘Hit The Lights’ from their first album ‘Kill Em’ All’. Having not had time to draw breath Metallica attacked with ‘Master Of Puppets’. The crowd broke, chaos and started created some moshing points. Unfortunately they did not create such a giant circle pit as at the Anthrax concert in Ancol, Jakarta, GBK.

Then ‘Fuel’, ‘Ride The Lightning’ and ‘Fade To Black’. Uniquely, a lot of fans in Jakarta, Indonesia were crying during a few Metallica songs. This might be due to the long wait since 1993 and this evening eventually ended.

After the song ‘Fade To Black’ James told the audience to count Metallica personnel, and ‘The Four Horsemen’ was kicked out and then followed ‘Cyanide’ from ‘Death Magnetic’ album. After ‘Cyanide’ Metallica proudly carried ‘Welcome Home (Sanitarium)’, ‘Sad But True’ and an epic instrumental of ‘Orion’ on that night was dedicated to their first bassist Cliff Burton, who died in the tragic tour bus crash in 1986. 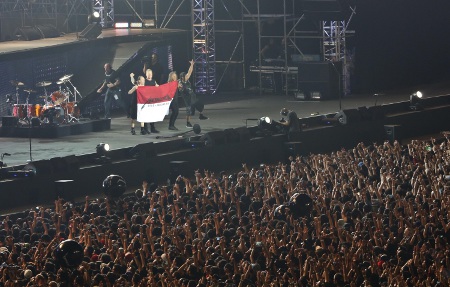 After ‘Orion’ the sound of guns and wartime boom. And predictably, it is the intro part of ‘One’. The crowd was hysterical and again created a mass choir in this song. Then followed ‘For Whom The Bell Tolls’ and ‘Blackened’. The band then performed two songs from the best-selling ‘Black album’, ‘Nothing Else Matters’ and ‘Enter Sandman’ made GBK Stadium roar as the entire crowd sang along at high volume.

After ‘Enter Sandman’ The Four Horsemen left the stage and the crowd screamed “We want more! The four members of Metallica returned to the stage and get ready to bring an encore. 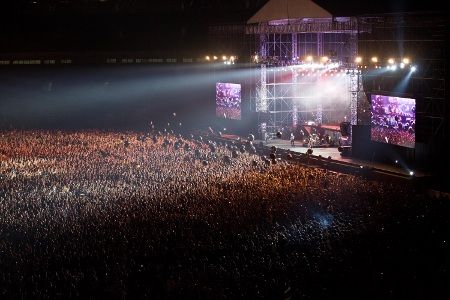 The first encore song is ‘Creeping Death’ then ‘Fight Fire With Fire’ which is rarely sung by Metallica at their concerts. The great and historic evening closed with a song with three words – ‘Seek And Destroy’. On this track they spread black balls bearing their logotype to the crowd. Great night, the crowd was very satisfied and happy. Metallica likewise, they also seemed pleased and happy for the crazy awesome crowd. Metallica said it would come back to Jakarta soon.

Yes, the long wait of 20 years had a sweet ending that night. The crowd was very satisfied and Metallica get a climax in the last city of their Asian tour this year. We hope Metallica remember their promise and will be back soon.