Luckily, there are plenty of resting spots in the shade and water-filling stations scattered all over the strategic points. We pause by this reveller in a Borat-style green mankini who is loving all the attention, and a selfie seems in order. One does wish to join the bikini party since the giant water slide looks ever so tempting right now.

A string of incredible talent lies ahead of us and the day begins with a very difficult toss-up between the Grunge-tastic latest Brit bombshell, The Mysterines and the enigmatic queen of the night, Juliet Simms, aka Lilith Czar.

The latter is a true find who oozes talent and the kinda in yer face attitude that you want to see at a rock show. Lilith protests that one should not care about anybody trying to tell you who you are or how to lead your own life. In her own words, “you are the ruler of your own universe, and that’s fucking it”, just before she unleashes their hit and final song of the set, Anarchy.

There is great anticipation for Spiritbox, who seem to be the new kids on the block everyone is talking about.

Technically very proficient, despite the filo prog influences of the school of Periphery being a tad too apparent, Spiritbox certainly impresses with a strong set. Especially popular are their classics Circle With Me and Rule Of Nines.

Singer Courtney La Plante is very competent at switching gears between a beautifully rounded, clean tone and a skilfully controlled growl. Spiritbox are a young band and, judging by the waves they are making on a global scale, can sure hope for a bright future. The one only remark would be that a hint more grit put into the performance would not go amiss.

One who does have heaps of show-‘woman’-ship is quirky blonde bombshell Taylor Momsen, songstress and official stage butterfly of dirty rock outfit The Pretty Reckless.

The last time we caught up with this band, it was in rather sombre circumstances, off the back of a support tour to Chris Cornell. Cornell tragically passed away in a hotel room on the night of one of the last dates of that tour. The band paid an incredibly moving homage to the singer, where a very chocked up Momsen literally had to fight off the tears during her stunning rendition of Audioslave’s Like a Stone.

But today, she is back to her usual self, happy, carefree, and with an utter desire to rock Rockville, “it has been a moment…”. The Pretty Reckless deliver an intense performance throughout and indeed captivate their audience to the max.

More clashes mean that one will have to miss the Lacey Sturm set, and this one does truly hurt. The ex-Flyleaf star is doing it for herself and rather majestically, if one may add.

We take a quick sprint to the Music Experience, where we are given a beautiful complimentary water bottle, to then land at the opposite side of the pitch, now literally covered by a sea of people.

This next band gets once again presented by a very excitable Mangin, who invites a moment of appreciation of one another because we are now family, just like the family that he is about to introduce.

Halestorm are a force to be reckoned with, and Lzzy Hale is their quintessence. There is a reason why they call her the Queen of Rock. Lzzy boasts that she feels honoured to have paved the way for so many talented ladies who keep making headlines for all the right reasons. She celebrates the ladies in rock, saying how difficult it has been to navigate a predominantly male-dominated industry when she was a rare breed.

Halestorm have had a very healthy career, and they have just released a new album. Their set is an equal split of classic and virgin tunes and not once losing steam, they literally set the place on fire. They deliver an electrifying set, fully charged and simply flawless.

Drummer and younger brother to Lzzy, Arejay Hale, is sporting a Taylor Hawkins T-shirt to pay tribute to the late Foo Fighters drummer. He could not leave without playing his iconic drum solo with big matchsticks. Indeed a band of stature and far from being done, for Halestorm the sky is the very limit.

This festival has seen a few lineup changes due to several adverse conditions. From the cancelling of entire tours still struggling with Covid-19 rules to the tragic passing of Taylor Hawkins and the inevitable inability for the Foo Fighters to appear, the schedule has been fluid, to say the least.

But despite the numerous difficulties, the DWP machine has managed to pull all the stops and power through this goliath of a lineup.

Loud cheers travel through the pitch while a tunic-laden Billy Corgan makes a rather solemn entrance to open the set for the long-awaited Smashing Pumpkins.

It is only by the second song that literally the entire field explodes in a sing-along to the ever-so-familiar lyrics of Bullet With Butterfly Wings. Other classics of the likes of Quiet, Today and Ava Adore get alternated with a succession of spellbinding numbers, proggy breakdowns and a drum solo by the very skilled Jimmy Chamberlin.

Billy disappears for a moment to then emerge holding hands with his two children, to the surprise of the puzzled audience, and they give daddy quite a run for his money when they literally grab the mic for Cyr.

But it is with Cherub Rock and the iconic Zero closing the set in succession that people literally lose it, and a sea of crowd surfers inundates us. The cheers keep rippling throughout in the hope of an encore, while a bemused Corgan acts as musical director to signal the audience to shout even louder. Pity that there is no time, but we can all convene that we shall all hail the Pumpkins and 30 years of amazing Rock!

It is a bittersweet welcoming for Nine Inch Nails, who have courteously stepped in for the Foo Fighters following the tragic death of drummer Taylor Hawkins.

Trent Reznor and co have some large boots to fill in and certainly not due to stature, but simply as a mere sign of respect. Trent is fully aware of that and indeed mentions what an honour this is.

Despite a slow start due to some technical issues caused by the excessive humidity affecting their intricate equipment, NIN captivates the endless sea of fans in one hell of a show and rightfully reaffirms their right to crossover mega-stardom, embracing so many different subcultures.

They are wrapped in a cloud of smoke and lasers beaming every which way, resting particularly on sepia, reds and blues while projecting illustrative versions of black and white on the big screens. This is possibly every photographer’s nightmare. However, it perfectly conveys their Industrial vein.

With absolute anthems of the likes of Closer, Mr Self Destruct, March of the Pigs, Wish, The Hand That Feeds, the entire set provokes explosion after explosion, just like the rippling effect of a strong tide, where people exult, dance, jump and of course crow surf all the way to the front on repeat.

The Reznor gang propose a very bouncy version of David Bowie’s I’m Afraid Of Americans, which seems to go down a treat, despite the controversial lyrics. The band then exits with a most welcome encore; this time, chills travel down the spine all the way. The first notes kick in, and a sea of lights emerge for the truly mesmerizing Hurt.

Indeed a true shame that the Foo Fighters could not be there. However, Rockville could not have chosen a better headliner. Welcome to Rockville has indeed been one hell of a ride. Could the issues have been prevented? Will lessons have been learnt? 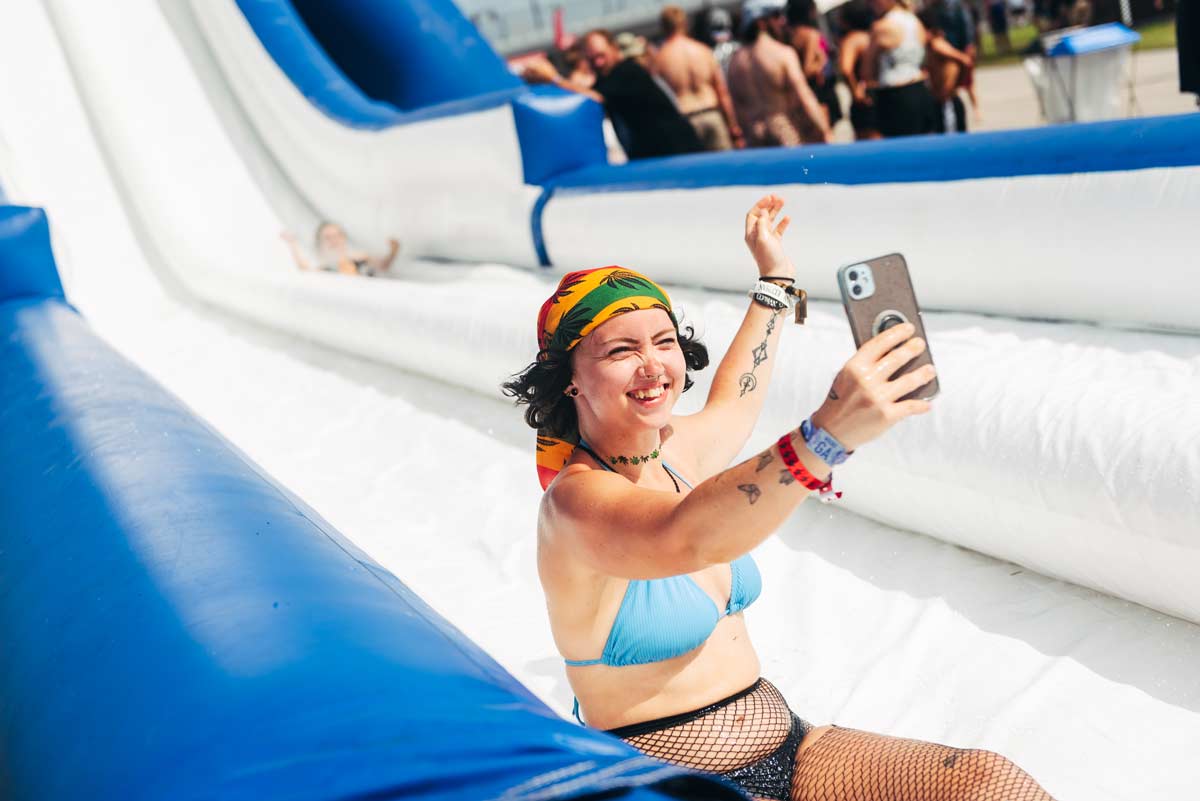 One might question the predictability of the risk due to the season chosen. However, the scheduling of a festival of this scale does entail so many variables. It proves particularly tricky, and it requires a great deal of planning.

The Daytona Speedway is a very popular site, jam-packed with events and with a full calendar throughout the year. There is also the issue of insurance, which would inevitably skyrocket during hurricane season.

Rockville has indeed been challenging at times, but when good, it has been spectacular, and, indeed, one cannot help the weather.

It was remarkable the effort of the DWP production to gather all the feedback, respond to all the queries and eventually offer a satisfactory solution by negotiating partial refunds or credit as a gesture of goodwill, and for this, we salute you.

Previous article
Coheed And Cambria continue epic Amory Wars saga with a genuine genre-skipping masterpiece
Next article
Jinjer fly the flag for Ukraine at Hellfest, sounding as brutal as ever