The Treatment released their latest album ‘Waiting For Good Luck’ through Frontiers Music recently and MetalTalk’s Paul Monkhouse caught up with Tagore Grey to discuss the past, present and future of the Cambridge quintet who have toured with the likes of Kiss and Mötley Crüe.

You can read Part One of the interview with Tagore Grey here and Part Two here.

What has always impressed me is that I’ve seen you at venues ranging from the Portland Arms pub in Cambridge to big festivals and irrespective of the size of show you put everything into it.

Tagore Grey: “Honestly, that is what it’s about. I mean, it does not matter if it is one person or if it is 100 people we have to play because we actually love playing. We play because we enjoy making music and when you go to your own show, whether its ten people who have paid to see you, or seventy or five hundred, that is what we love and how could you ever let someone down who has come and done that for you.

“It is such an important attitude and part of the band, that it does not matter who’s there, we play like our lives depend on it and we play like that because we love it.”

There is always your obvious love of the music, you are not going through the motions and because of that it comes over as very natural and just really engages everyone…

“It is great to hear you say that because…it’s weird, I guess we don’t really notice it that much…we see something different to what you see. What it feels like is a brotherhood bond as well and there is just a great feeling when we get up and play together. It is an interesting thing with The Treatment, as you can only be in The Treatment if you love being in The Treatment. The whole thing along the way with anyone who has left, is because they don’t enjoy doing it anymore.

“That was the thing with Rick and it is great he had a frank conversation with us and just said for him it was too much for him to do. We are human beings, we are not going to make someone do something they do not want to do. It was the next day we just said “mate, you know, we absolutely wish you the best, because it’s not for everyone”. It is a very hard industry to be in and you have got to be dedicated and you can’t put 99% in it, you have to put 100%.

“So, you put a lot on hold to do it and that is fine if you love it, because it is not a chore, but I think when it stops being loved, that is when it becomes hard to do. So that has always been our kind of thing…if you don’t want to do it, don’t do it…but if you do, we need 100%.”

You’ve highlighted some of the hardships and you know you can play in Russia and Japan and can do these huge tours of the States, playing with all these incredible people, but there potentially comes a point that you do get tired of it and need a break.

I know with Rick it was himself, you and Dhani who were there from day one so it must have been hard to say goodbye to him but you all realised it was time for him to move on…

“Absolutely. I remember, we were there the time Rick lost his virginity, that is how far back we go. We were brothers and we still are. It is great that he has stayed in Cambridge, because we still get to see him and we really do wish him the best. But it is like you said, for some people they get tired of it.

“It is a strange life to live. Some people are built for it and I don’t find it strange, I love it. If you are not in it [100%] then it just it would not work for you because it is such an intense experience. Everyone just sees the records coming out, but for us that work was done six months ago and we are already jamming into something else…the work is constantly happening. It is a moving forward process and there is not a lot of downtime being in a band, because you have always got something going on…but if you are somebody who loves that, then that is not an issue.”

There was an interesting thing that came up on Facebook recently…someone on one of the Download Festival forums was complaining about the line-up. He said that the headliners are always the older bands like [for next year] Iron Maiden and KISS and they were taking the spaces for the younger up and coming bands, stifling things.

The material that you write and play does key in very much to that Classic Rock style that has been so popular for many years.

It is all to do with great songwriting and performance, and whilst we all really appreciate the bands like AC/DC and Status Quo, we know that they are not going to be around forever. I see you bridging that gap between the two, a young band carrying on that tradition and sound…

“I think it’s one of those things…we never just wanted to be a headliner of whatever, we did it because we love music and we just want to play…we feel 100% we want to fly the flag for Rock ‘N’ Roll. That is what we love, we are not going to change genre. It does not matter if we are not the new top thing in the charts or whatever, because we are playing music that we want to play. That’s it. That will never change.

“Also, there are these absolute classic legendary bands who are still going to deserve the headlining spot because they are putting in 40 or 50 years work.

“I do also flipside it and they have paid their dues, you know what I mean? I just hope one day that we get the chance to do that when we have paid our dues. That’s what I think… It is not about just letting the young bands through, I think it is giving the young bands a chance.

“It’s like you said, these large bands are not going to be around forever and then when it is time, hopefully some of us would have paid our dues and will have earned the respect and the right to stand on a stage and headline it. You can not just get there with a bit of luck. You have got to work to get there. With Rock ‘N’ Roll, the fans know whether you are just a flash in the pan or whether you are a real band or nota and that comes with time.

“I turned round the other day and thought, “we have got five albums!” For me, I still feel like I am leaving school and coming down to Cambridge the first time. I don’t feel any older, so it is quite weird. That is all part of the whole thing…becoming a great band is earning the respect and the loyal fan base.

“I would say it would be great to see more support for the new wave of bands coming through, at the same point I think that if Iron Maiden or AC/DC are headlining, that is because they are legendary and because they deserve to be.

“You can not just put some upstarts up there and say “Oh, well, that’s sorted”, because you have to pay your dues.”

These bands have built up their careers through the 60’s through the 70’s into the 80’s. They built Rock ‘N’ Roll and from them sprang Monsters of Rock Festival and from that, Download and they are still selling albums and concert tickets. There is, though, some fantastic newer talent out there, some of whom carry on a more traditional sound.

“Yes…with us there has been a development over the five albums and we have always written what we have written, without aiming for anything other than being ourselves.

“The sound has developed through the years as people have come and gone, but we have never been contrived. We are not trying to be anyone else and we just play what we love and grew up with…it is just what we want to do.” 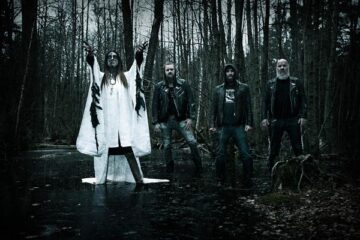