Formed in 2013, Lithuania’s first ever Death/Doom Metal outfit Sullen Guest return with a second studio full length ‘Chapter III’. This follows their 2018 release ‘IIIIXXI’, which saw a major change of line-up, with the only original member, guitarist and founder Tenebra remaining.

In a search for a more distinctive, old school Death/Doom sound than on the first EP [2015’s ‘Will You Greet the Sullen Guest as an Old Friend?’], the new sound is denser, heavier, more Doom rich and very fitting for both the name and lyrical content.

The meaning behind the Sullen Guest name represents unexpected experiences and emotions we are inevitably forced to face in our lives: pain, death, loneliness, fear and betrayal. Each one of us has been visited by these sullen visitors, which ties in nicely with the influences behind ‘Chapter III’.

The fragility of life, the pain of the soul, the shocks of life and death have fuel the creation of this album, with a sound that puts great emphasis on emotional vocals aimed at forcing the listener to experience the emotion of the lyrical character. This is offset against an Old School Death/Doom sound, which is melded with some uplifting melodies and rhythms.

You can definitely look forward to some chunky offerings on ‘Chapter III’. With everything falling between the five and seven-and-a-half-minute mark, as well as being pretty weighty in the content department, it is a crusher of an album, but one that often does so slowly. 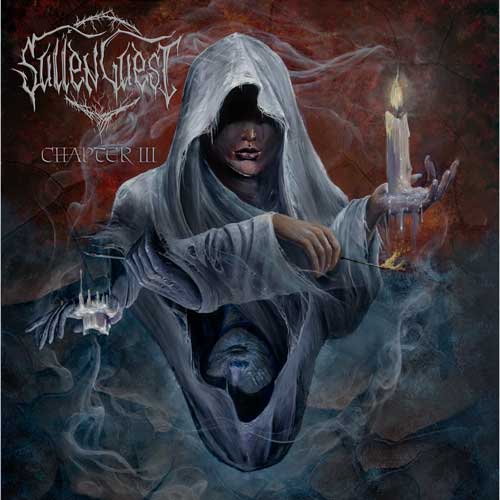 I particularly like the vocals across the release. They are my favourite element, a brutally expressive mix of growls, snarls and angry screams, for me, achieving that emotional experience with their delivery.

Opening on one of my favourite tracks of the album, ‘Nothing Will Be Forgotten’ is a bleak, haunting and reflective piece, with a ground shaking meld of guitars and vocals interspersed with lighter melodic passages.

This is followed by another track which stood out for me, ‘Dewfall’. It is lighter to open, but the bleaker undercurrent gradually prevails and a dirty aspect to the melody develops as it progresses.

The remaining tracks also all have their individual qualities. ‘Mortal Cord’ has an addictive dark and harsh melody, ‘Footprints’ a sultry Doom rich edge and on ‘Limbonic Perdition’, bursts of Death Metal orientated drive surface out of the doom-laden bleakness, adding extra depth.

The penultimate track is a haunting beast. Titled ‘Samsara’, which the band explain means “the cycle of death and rebirth to which life in the material world is bound” is reflected in both the track and the video below. This also has a link with the idea of Ouroboros and tells the story of “a person who is imprisoned in his daily gloomy routine and soviet atmosphere, and has to die every night. In the morning he is born again in the same world around him, from which he cannot escape.”

The band told us: “This is Samsara. We are born into this reality, devoid of any alternative choice. You could deny it, but still you must participate. The extent to which you do so is your choice alone.”

Closing piece, the instrumental ‘October Lullaby’ takes a more reflective stance acting as the gentle calm after the grim storm. It concludes all that soul wrenching in a moment of reflection, which is much needed to process all that has passed.

The fascinating hand drawn album artwork for ‘Chapter III’ illustrates symbols of Life and Death represented by two ladies holding candles. Their smoke forms, albeit subtly, an Ouroboros symbol of the serpent with its tail in its mouth, continually devouring itself and being reborn from itself. Surrounding them, this visually emphasises much of the concept of the previously mentioned penultimate track ‘Samsara’.

Sound wise it should appeal to fans of bands like October Tide, Novembers Doom, Swallow the Sun, Daylight Dies, Officium Triste or Ataraxie.

It is available from sullenguest.bandcamp.com as a CD or digital release.

“There is no light in your window anymore – you have been visited by Sullen Guest.” 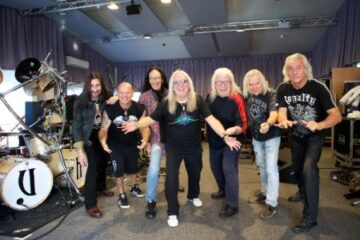