The fantastic Ryan Roxie, solo artist and guitarist with Alice Cooper, recently talked with MetalTalk to discuss his new guitar tuition project ‘System-12 Guitar Method’ and how he is helping to pass the torch of Rock ‘N Roll to the next generation of Metal stars.

Roxie has played with Alice Cooper since 1996, was a key member of ‘Slash’s Snakepit’ and continues to record solo material alongside the successful ‘In The Trenches’ podcast.

Of the ‘System-12 Guitar Method’, Ryan tells us:

“Yeah I’ve actually been working on this method for a number of years, with a bunch of other teachers. Its a collaboration and we’ve basically pooled all our experience.

“I have a lot of experience not just playing guitar but teaching guitar as well. We were going to release it when I was on tour with Alice Cooper but then everything started shutting down and quarantine became the norm. So I thought this is really the time for people to learn guitar so we started out kickstarter.

“We’ve already started the beta version and people are already learning with it. I’ve been doing online lessons for the last ten years and this is my first venture with my team going out there myself. But I’ve been teaching guitar since I was like 15 in California for pocket money. Back then the riff was `Smoke On the Water` and today it still kind of is ! Actually with System 12 we guarantee you can learn guitar in 12 weeks if you really apply yourself.

“There are really only 12 notes in music and 12 frets on your guitar until it repeats itself. So far its really inspiring to see so many people using this time to do something they’re always wanted to do. Learning guitar is one of the most therapeutic things you can do.”

“We would go to the studio everyday and write and record as a band and to be honest with you I think it’s some of Slash’s best guitar playing. You get an idea idea of how great a riff writer Slash is and Rod Jackson on vocals…I still enjoy listening to that album to this day.”

Visit RyanRoxie.com to find out more. 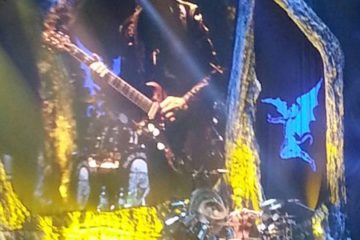