Mentor / Wolves, Wraiths and Witches and the intersection between occultism and B-horror

Polish Blackened Hardcore Thrashers Mentor return with their third studio album, Wolves, Wraiths and Witches, which, they say, “is a continuation of the fast, hard and uncompromising style delivered on our 2016 debut Guts, Graves and Blasphemy.” In this latest release, they continue to find lyrical inspiration from the intersection between occultism and B-horror movies.

If you want an end to end, rammed to the brim album that takes no prisoners, this could be just what you are looking for. They’ve melded the raw end of Black Metal into Hardcore Punk. These are two genres that do mix well, given their construct commonalities. They have also added a good dose of Thrash, resulting in a predominantly up-tempo no holds barred, D-beat rich, unrelenting aural assault that will have bags of appeal for both Thrash fans and Hardcore fans alike. 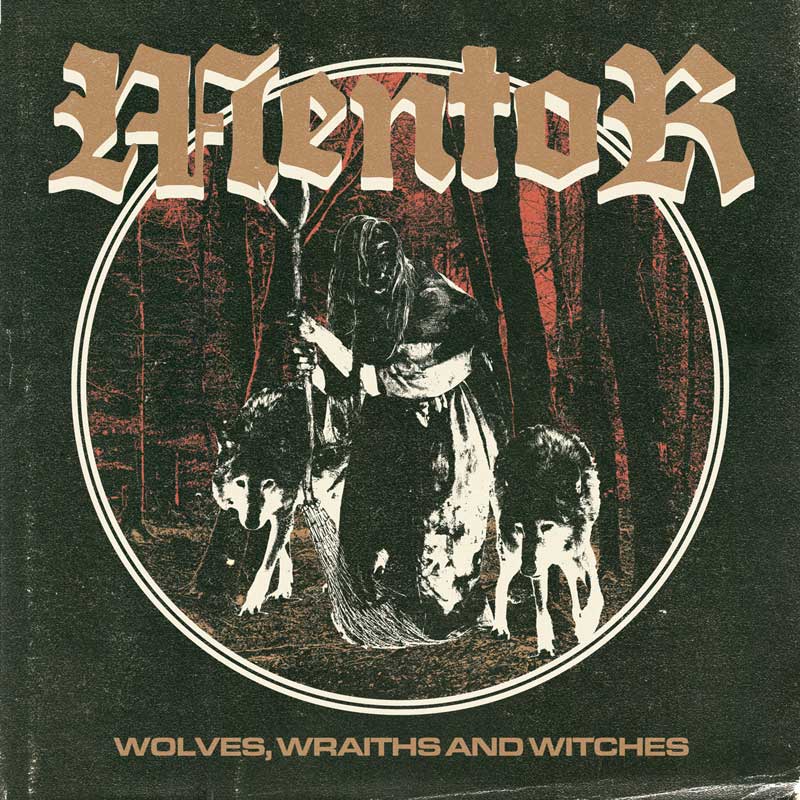 Wolves, Wraiths and Witches is a nine-track offering packed into a compact twenty-seven minutes that barely leaves you time to catch your breath between tracks.

Opener Equal in the Fire is a thrashy chugging driver with a catchy repeat chorus. “Equal in the Fire was one of the first tracks written for the new album,” the band told MetalTalk. “It really set the tone for all the material that came after. It’s very fast and very savage, with lyrics talking about the destructive, yet cleansing power of fire.

“It doesn’t matter who you are, what are your accomplishments, beliefs or petty delusions of grandeur, we all become equal when flames devour our bodies.”

Equal in the Fire is rapidly followed by Satan’s Snake-handlers, which takes a critical look at organised religion. It comes in lower and faster, again driving along with determination, the guitars elevating to a searing burst of midpoint leadwork. This flows seamlessly into the up-tempo and punchy Fed After Midnight, and as the title suggests, it is inspired by the 1984 film Gremlins.

The Great Grave In The Sky is slightly slower in tempo, deceptively heavy with an underlying filthy and sinister groove and dramatic bursts of militaristic drum work midway. One of my favourite tracks, and as a contrast, the next offering, Creature Feature, is initially a marauder of a track that slips into more of a groovier mood as it progresses, without losing too much of the urgent pace.

Tantalising bass lines open Dance Of The Dead, which rapidly opens out into the now familiar, urgent driving, chugging style. Whereas Blood is Love, which begins with an engaging bit of loose bass work, is a slightly more unique piece. It starts off dark and driving, developing into an equally dark but groovy rocker with clean rock style vocals and more loose bass work towards the close.

Penultimate offering, A Night So Grim, is another unrelenting galloping driver with a dark, sinister drop to the close, ramping back up for the final onslaught, Sealed in a Tomb, which has more of those great loose bass lines in the latter part of the second half that heralds a change in direction, without losing any momentum in the drive.

Wolves, Wraiths and Witches is an exciting listen, and as much as I love the driving riffs and unrelenting sensory assault, I love the harsh vocals even more. They are well varied and hugely expressive, sometimes higher and acidic and other times lower and raw, all with a shouty edge, delivering the lyrics with clarity of content and adding dimension to the overall sound.

But don’t just take my word for it. Go give it a listen.

Previous articleAlice Cooper to hit the road in 2022, before headlining Monsters of Rock Cruise
Next articleMichael Schenker / A superb night from a Heavy Metal legend still at the top of his game