Barry McKay, the man suing Iron Maiden over the copyrights for six songs written before 1982, has taken to social media in an astonishing, lengthy rant that has surely jeopardised any chance he had of actually winning his case.

It is claimed in court documents served this summer by “serial litigant” and former Lindisfarne manager McKay that former Maiden singer Dennis Willcock wrote the lyrics to five of the six songs in question, namely ‘Iron Maiden’, ‘Prowler’, ‘Phantom Of The Opera’, ‘Charlotte The Harlot’ and ‘Prodigal Son’.

Willcock was Maiden singer between 1976 and 1978 before being replaced by Paul Di’Anno who sang on the band’s first proper recordings and first two explosive albums. Before Di’Anno joined Maiden, the band were confined to the local pub circuit in London’s East End.

The sixth song in the claim is ‘Hallowed Be Thy Name’, which was also the subject of a court action in 2017. It is alleged that one line of lyric was taken from a Beckett song, ‘A Rainbow’s Gold’, which was actually covered by Maiden and released as the b-side of the 1984 ‘2 Minutes To Midnight’ single as ‘Rainbow’s Gold’.

The action is being brought by McKay on behalf of Willcock, and in the case of ‘A Rainbow’s Gold’, former Beckett vocalist Terry Wilson-Slesser. Since bringing the action, McKay has issued press releases containing dubious information to a wide variety of outlets and when no stories emerged from these releases and no serious media support was forthcoming, the Hampstead, London resident took to the comments section of online rock and Metal news resource Blabbermouth to present his case instead.

This seriously unprofessional approach, that stretches over two weeks at the time of writing, has almost certainly compromised his case, with the majority suggesting that his bitter diatribes, littered with spelling and grammatical errors, wild inaccuracies and blatant untruths, are the actions of a desperate and beaten man.

McKay, known to suffer from mental health problems and difficulties with alcohol, has embarked on a vicious, personal smear campaign against Maiden founder and leader Steve Harris in a misguided attempt to influence the impending court case and MetalTalk and other parties with knowledge of this case have received threatening emails.

MetalTalk owner and Editor Steve Göldby has made the following statement:

“Last year I presented McKay with solid evidence that Dave Murray has never claimed a songwriting credit for ‘Charlotte The Harlot’. I have also categorically demonstrated to him that the notion that Dennis Willcock was unaware of Iron Maiden’s success since 1980 is preposterous.

“These are just two examples of evidence presented to McKay that indisputably shows his case is deeply flawed. Sadly, he has chosen to ignore it all and therefore, if he presents his case in court whilst concealing the information I gave to him, he will be committing perjury. He would do well to recall what happened to Jeffrey Archer in 2000.

“McKay threatened to subpoena me on 6th August so I sent him my real address so he could. He then offered me a ‘truce’, which I did not respond to. His Blabbermouth rantings began almost immediately after this exchange.

“The fact he would want to subpoena someone who can produce evidence to damage his case and potentially prove him to be a perjurer, should that situation arise, suggests that he is unfortunately not in charge of his own faculties at this time and has totally lost control of this case.

“Recently, McKay lied about me on more than one public forum in an attempt to turn Iron Maiden members and management against me, so should he retract his promise to subpoena me, I will demand that I stand as a witness in this trial so that the truth will out.

“He should beware the ides of March. The colours on my Iron Maiden tattoo may have faded slightly since I had it done in Belfast more than thirty years ago, but they will never, ever fucking run!”

McKay’s attempts to prejudice the forthcoming trial through media manipulation look to have severely backfired as several Maiden fans have now called him out on his personal vendetta against Steve Harris.

His Blabbermouth postings are not only ethically questionable but boastful, conceited, gloating, egotistical, heavily flawed and strain the bounds of credibility to far beyond a reasonable limit. Included are choice phrases such as “the far right wing of the Iron Maiden army” and insults to intelligent and informed respondents such as “I hate your type” and “I’m delighted I irritate you. So… fuck you and all like you”.

McKay also states “he reminds me of Pinocchio with a bass guitar” when referring to Steve Harris, as well as making the outlandish and libellous claim that: “He’s bought his mansions and shagged his way around the world”.

He also accuses Dave Murray of being “off his head at the time?” and sarcastically refers to Rod Smallwood as “almost a great manager” whilst offering that “it all started when Smallwood turned up 38 years ago. I used to deal with him when he was a lowly agent at M.A.M. and I didn’t like him then either.”

Amongst the 100-plus posts in the discussion thread, Tony Miles, who played with Willcock in the bands Gibraltar and GV1, exposed McKay’s tactics by saying: “By making enough noise and hints of skullduggery you hope that Maiden will not want to risk a public airing if there’s any danger of showing them in a bad light.”

McKay responded with more diatribe and personal insult, including: “Tony, that’s it. I have had enough of you. I think you are a cretin…”, as well as: “You are a bitter, never-has-been and never-will-be PARISITE [sp]”, as well as referring to the guitarist as “an objectionable, jealous idiot” and ending one exchange with “Now fuck off!”

McKay also refers to a Norwegian poster, Revelations Music, who makes reasoned, well thought out and intelligent observations, as “a biased clown” before continuing with: “I’m not going to even read any more of your worthless, ignorant posts. Get a life!”, “Clot! Can’t you read? Are you dim or just stupid?” as well as: “You don’t deserve any further responses from me you cretin. You are clearly ignorant.”

Here’s a further selection of comments, taken randomly from the discussion thread. It is unclear whether the final one is referring to last Friday or Saturday night’s performance(s) at London’s O2, both of which were sold out. 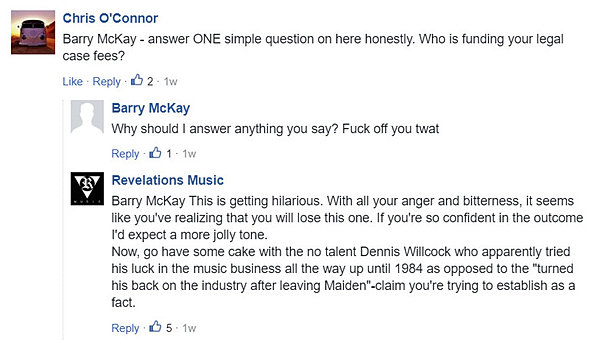 During this dialogue, McKay boasts about his inclusion in Simon Garfield’s 1986 book, ‘Expensive Habits: Dark Side Of The Music Industry’. McKay is quoted in the book and described as “naive” by the author, a claim that is backed up by him prejudicing the Dennis Willcock case on social media.

The likelihood now is that any impartial judge will instantly dismiss this case as the litigant has broken the rules that govern court actions.

McKay is also promising to release a book once this case is over, that “will have the real true story and all of the evidence laid out.” He has stated publicly that: “My book was due last year but has been held back for the outcome of this trial,” as well as: “I’m now preparing another legal action against a UK Limited Company owned by a 3rd member of Iron Maiden.”

This is almost certainly referring to Maiden vocalist Bruce Dickinson who part owns a company that administers the rights to Samson’s back catalogue.

Maiden stated when this action was first brought about: “[Willcock] was, when he was a member of Iron Maiden, notorious for forgetting lyrics for the band’s songs, or missing out words, or singing the wrong words. He… even had to sing from lyric sheets at live performances. Accordingly it is implausible that Mr Willcock can now remember lyrics he allegedly wrote some 40 years ago.”

This claim is backed up by the fact that Willcock failed to correctly recall the chorus to Maiden’s eponymous set-closing anthem in a recently published audio interview and that MetalTalk were offered sight of the original lyrics to Maiden instrumental ‘Transylvania’ some months ago, but this never materialised because Willcock could not, and still cannot, recall them.

McKay, who takes pleasure in publicising his past involvement with Gary Glitter, has further damaged his tenuous £2million claim with exaggerated claims of Willcock’s talent. The aforementioned Tony Miles pointed out that Willcock wrote the words for the V1 song ‘Schoolgirl (She’s So Easy)’ and the Gibraltar song ‘Sixteen And Loose’ and that these works “still make me cringe”.

Finally, McKay states in this following post that he would like to hear the tape in question. We can confirm that he definitely has heard it because he played his copy of it to us in March of this year.

It was removed from circulation because it is not up to the high standard that Iron Maiden would wish to be associated with, both sound quality and performance wise.

This hearing took place at the same meeting where McKay confirmed our suspicions that he is not bringing this case, and has not brought previous cases, through a desire for justice, but rather to further the cause of and expand his music publishing catalogue by taking on the costs of the court cases in exchange for a substantial share of future royalties from the songs in question.

MetalTalk will be making no further comment on this case until after it reaches it’s conclusion as to do so would potentially jeopardise or prejudice proceedings.

Usual copyright rules are waived for this article and any publications who wish to reproduce any of the content in this article, in full or in part, may do so with our full permission and without any fear of reprisal.

MICHAEL SCHENKER FEST RELEASE 'TAKE ME TO THE CHURCH' VIDEO