Canadian cranium crushers Anvil had already pounded the pavements of the UK earlier this year with a highly successful and gruelling two month European tour. But with a date at the inaugural Stonedeaf Festival, the tasty trio were back, flying over from Toronto for what drummer Robb Reiner described as “a wild weekend bender.”

Sandwiching the Stonedeaf Festival with two low-key dates, one in Milton Keynes and this rather private affair in the Welsh valleys hosted by landlord Sam Hill, who in a new venture was turning his boozer into a rock venue with Anvil being the first band to provide live music.

Buried deep in mid-Wales, Machynlleth, colloquially known as Mach for those who can’t roll their tongues around the Welsh language, is a rather quaint laid back small town proud of its ancient history.

Not since 1969, when Led Zeppelin rented out the nearby cottage of Bron-Yr-Aur to write songs for their third album, have the local residents been deafened by the sounds of Heavy Metal.

The Y Llew Coch – that’s the Red Lion boozer for you and me mate – is a cosy pub perfect for live acoustic evenings. However, the neighbours were in for a rude awakening as the gig was happening out in the pub backyard under a marquee tent not specifically designed for keeping the sound under wraps. 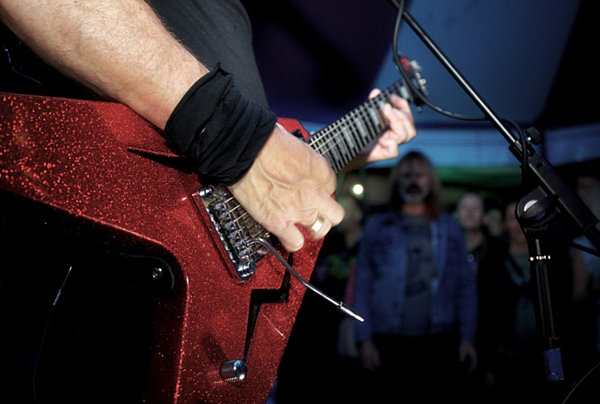 ​Not that the landlord cared as he felt that he was strongly contributing to the community with some free entertainment. There was even some special Anvil Bad Ass ale on offer to celebrate the occasion.

The gig was delayed to a starting time of 9.30pm, to not upset the Crachach who were attending an outdoor classical concert, and right on cue, the side stable doors opened and out came Anvil to a heroes welcome with a grinning Lips cranking up his Flying-V and it’s frets away on the instrumental ‘March Of The Crabs’ before signalling with his fingers that the next track is the hard’n’heaviness of ‘666’.

Jaws are agape at the surrealism of what’s going on before disbelieving eyes. The majority of people here from this idillic hideaway town are seeing Anvil live for the first time ever, having only seen them before on their TV screens via the movie ‘Anvil – The Story Of Anvil’. 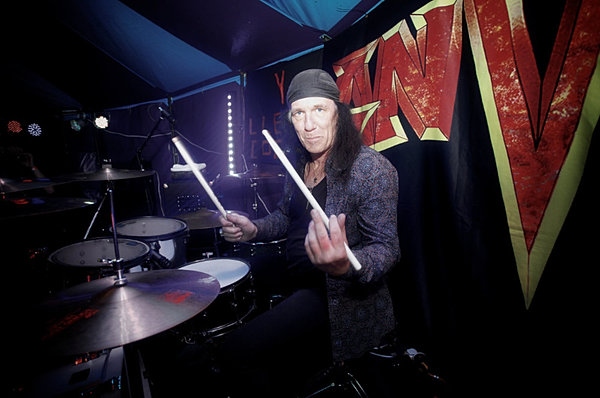 Folks at the back have climbed on top of the garden tables or any other contraption to get a look over the heads of those down the front. There’s no stage as such – Anvil are right in our faces at eye to eye level.

‘Ooh Baby’ is a real old school neck breaker while ‘Doing What I Want’ eases the pain, a new punk flavoured track from Anvil’s rather excellent new opus ‘Pounding The Pavement’. As Lips explains about the album’s title: “We’ve been pounding the pavement for forty years now, and that’s what we do. We’re like door to door salesmen. We come to your town and ply our trade and hope that you buy our CD’s and t-shirts from the merch stand.” 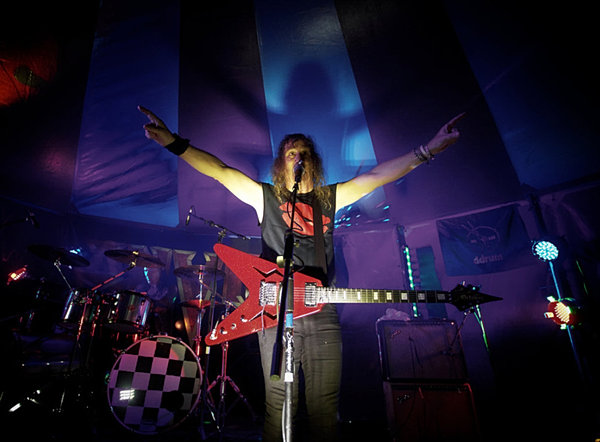 There’s no let up for the sat-nav derived ‘Bitch In The Box’ which has already become a bonafide head banging classic.

Robb Reiner is a beast of a drummer, quite possibly the best that there is, coming across like the Ian Paice of Heavy Metal on the jazzy instrumental rhythm of ‘Swing Thing’ and glasses are raised high for the drunken scurvy stomp of ‘Daggers And Rum’ before ‘Metal On Metal’ gets a fine Welsh choir backing on the life affirming chorus.

A frantic cover of Steppenwolf’s ‘Born To Be Wild’ sent the local bikers into a speeding frenzy, making this a gig that will be spoken about in these parts for many years to come. A real “I was there” moment to cherish forever.

Machynlleth was well and truly Anvilized.