Liquid Tension Experiment – LTE3 (Inside Out)

The bands first self-titled album was released in 1998 to great acclaim, quickly followed by ‘Liquid Tension Experiment 2’ in 1999. Then it ground to a halt through a few reasons, the biggest one being the various members schedules with their “day job” bands.

The debut LTE album was, in effect, an audition for Jordan Rudess, who impressed Portnoy and Petrucci so much that he was offered the keyboard slot in Dream Theatre.

All members of LTE had been asked constantly if there would ever be a third album. All had said they would love to do another if their schedules permitted. 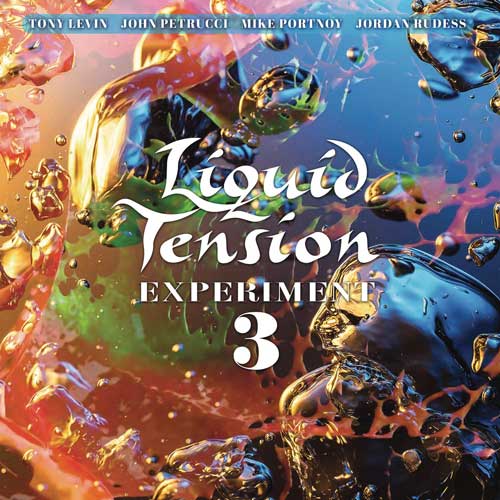 2020 and the planet is crippled by the Covid pandemic. All touring is cancelled and the world is in limbo.

The feelers went out to see if the members of LTE would like to do another album, given they did not have much else to do – apart from Portnoy, who continues his quest to play for every single band in existence!

Social media photos of individual members wearing face coverings appeared, with each member sporting a different character – L, T, E and 3!! Could it possibly be happening? It only could you know!!

A studio was booked in summer 2020 and the members of LTE gathered together for the first time in 21 years. The results are to be found here.

A statement of intent

The album kicks off with ‘Hypersonic’ and, as statement of intent, it is pretty convincing!

The opening 40 seconds or so literally fly by in a flurry of notes. The unasked question of “can you shred on a drumkit or keyboard?” is answered convincingly here. Yes you can!! There are many musicians who can play lightning fast, but these guys are on a different level.

As well as speed, we have precision and most importantly, soul. Lets not forget that the members of LTE are not young whippersnappers – bassist Tony Levin is 74 – and to be still playing with this much speed, style and virtuosity is mind blowing!!

‘Beating The Odds’ and ‘Liquid Evolution’ are up next and showcase the breadth of LTE’s musical palate.

A cover of Gershwin’s ‘Rhapsody In Blue’ is included and is just incredible. The band had performed this cover version live and now we all get to hear it in its complete majesty. ‘Shades Of Hope’ is a quite beautiful instrumental ballad and is all the more remarkable when you discover that it was an improv jam.

The album closes with the epic 13 minute plus ‘Key To The Imagination’.

This could be the answer to the question of “What do Liquid Tension Experiment sound like?”

It has everything and covers a myriad of styles and tempos.

LTE3 can be pre-ordered from here and is available in the following formats: