According to some research, roughly 100 million years ago, the Moon was formed as a result of a massive collision between Earth and a planet embryo about the size of Mars called Theia. Such giant impacts are rare. The Rock Den saw Burton-On-Trent’s own Theia make an appearance colliding with Black Tree Vultures and the irrepressible Hell’s Gazelles. Admittedly, no moon was created this time, but there was a bit of a bang!

Theia’s mission this time round, by way of Kyle Lamley (Vocals & Guitar), Paul Edwards (Bass & Vocals) and Jake Dalton on drums was to play high octane, fully-loaded, riff-driven rock’n’roll with a side order of catchy choruses and huge riffs backed up by a thumping rhythm section. Did they succeed? Yes, pretty much.

There is, along with the above, excellent vocals and musicianship, and a fun side to this band, and you find yourself waiting for them to explode. However, it was only with the last couple of tracks, especially ‘Whoop-Dee-Fucking-Doo’, that they really showed their ability to grab the crowd by the short and curlies and give them the show that they’d craved from the beginning.

Suddenly, there’s Edwards on his knees double bassing the bass with Lamley headbanging and jumping about next to him as Dalton gives the skins what for in the background. Great stuff.

An excellent young band with the ability and confidence to really make a name for themselves. A little bit more of that in your face stuff throughout the rest of the set and they will have a stage show that will leave the crowd begging for more. 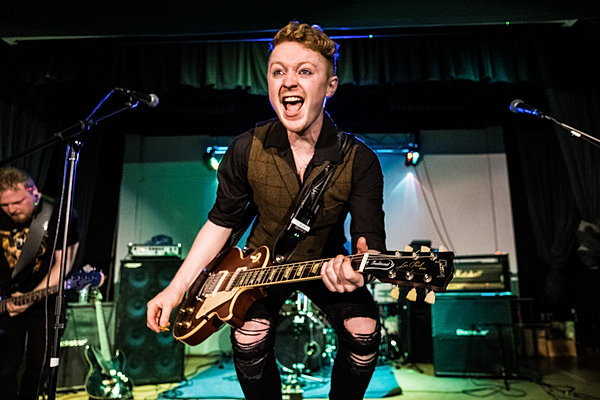 With the aftershock of Theia still ringing in the ears, Bournemouth’s rock and metal foursome, Black Tree Vultures, come swoop-dee-fucking-dooing onto the stage. Straight from the off, faces are gotten into.

With the body pumping, crowd walking, Celyn Beynon leading the way, Aaron ‘Ham’ Hammersley (Lead Guitar), James ‘Ched’ Cheeseman (Bass) and Jonno ‘Animal’ Smyth on drums, they unleash a powerhouse set including tracks, ‘Overrule Me’, ‘My Filthy Redhead’, the riff-busting ‘Thanks For The Memories’, and new track ‘Bitter’.

Their five-track debut EP, ‘Sanity Isn’t Perfect’, is a cracker, but get out and experience the passion-fuelled intensity that the quartet’s live performance brings. The band revels in this as much as the crowd and you get the impression that they take something away from each gig which, in turn, inspires them to bigger and better things. There’s also an excellent modern edge to their classical metal influences that should appeal to both old school and new comers to the rock scene. 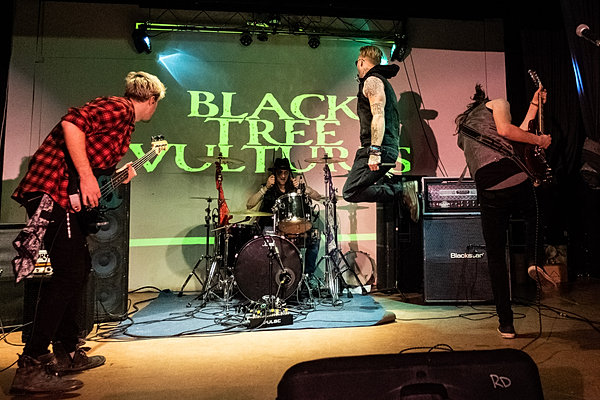 On to headliners Hell’s Gazelles then. In your face doesn’t quite do their act justice. In fact, I’m sure the roof parted with its rafters a few times as the Oxford-based hard rockers tore the Rock Den a new one.

One assumes vocalist Cole Bryant once watched the 1994 film ‘Speed’ and got it into his head that if he stopped running, leaping or jumping among the crowd and around the stage, or stages in this case as they bring their own spare, he would explode. I’m surprised he didn’t anyway.

As if his soaring vocals and frenetic pizza-fuelled antics weren’t enough, Nath Digman (Guitar), Rik Ridemark (Bass) and Luke Evans, seemingly trying to beat the drums to death, ripped the place apart with a gut-busting set of big ballsy riffs and big choruses.

As well as tracks taken from their two excellent albums, ‘Take Your Medicine’ and the eponymous ‘Hell’s Gazelles’, such as ‘Give Me Something’, ‘You Ain’t Nobody’, ‘Braindead’, ‘Take Your Medicine’, and ‘She Devil’, there was a wall wobbling drum solo and a fantastic fist pumping, sing-a-long cover of Billy Idol’s ‘Rebel Yell’ for an encore.

A killer live show that needs to be witnessed to fully appreciate its ferocity. Take a bow guys. Superb stuff. 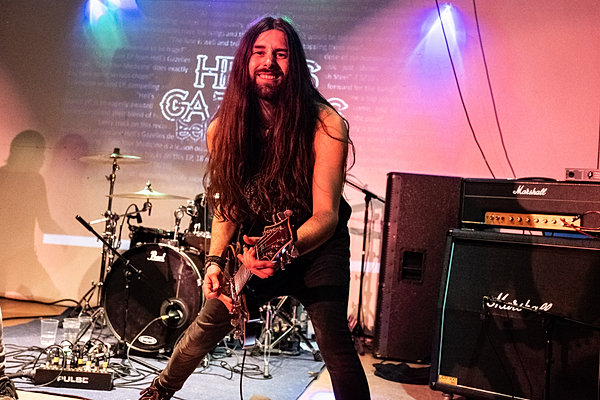 MetalTalk Gig Of The Week / The Rock Den, Hatfield, returns after enforced break 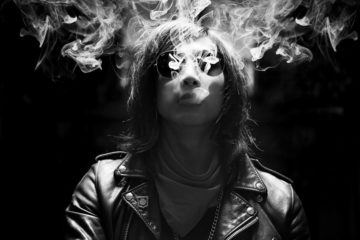