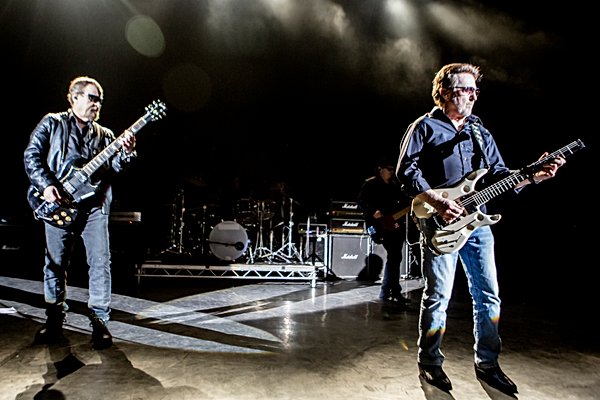 They’ve been visitors to the soft white underbelly of these shores ever since their dark and driven style first captured the imagination of UK audiences in the 70s, with compelling albums like ‘Secret Treaties’.

Incendiary festival performances at Ramblin’ Man in 2015 and Stone Free in 2017 appear to have rekindled the wider appreciation of their impressive back catalogue and their continued ability to dominate stages and submit audiences. Significantly, this tour marks a return to many of the larger theatre venues where the band had crowds on their feet and on their knees in the 70s and 80s. 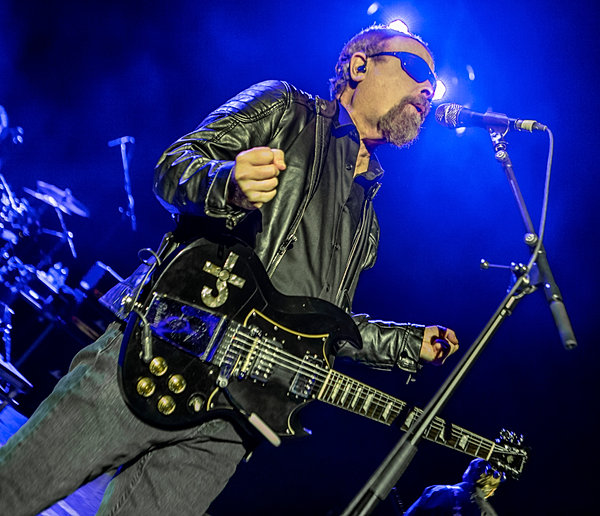 Forty years after their four-night residency on the ‘Mirrors’ tour, Blue Öyster Cult returned to the venue forever known as Hammersmith Odeon (with apologies to Mr Even Tim), for the first time since 1989, to a tumultuous welcome from the expectant London crowd.

As it had been for beleaguered support, The Temperance Movement, soporific sound and lacklustre lighting plagued the opening brace of ‘Dr Music’ and ‘Before The Kiss, A Redcap’. This failed to dampen the spirit of the performance, led by golden couple Buck and Bloom, with Dharma’s ever-eloquent guitar captivating and Eric’s laconic vocal as rich and malevolent as always. 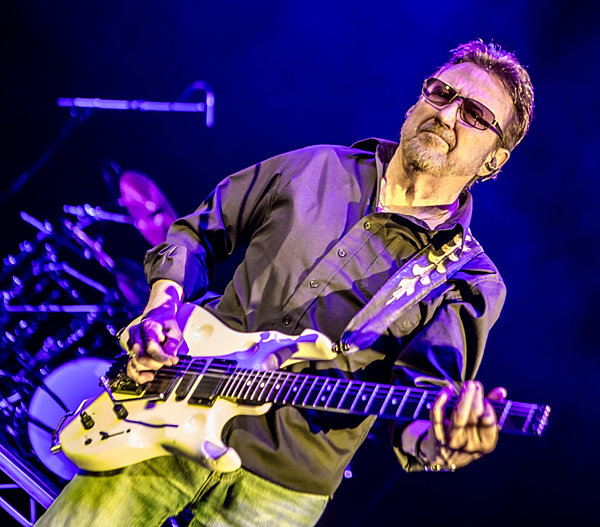 ​With jammed faders kicked-out and sonic woes overcome, the increased energy of third song, ‘Career Of Evil’, was palpable, as Patti Smith’s inventive lyrics shimmered on top of a demonic New York groove that summoned the Dead and the Doors.

Although beloved for the locomotive force of their brand of psychedelic boogie, it’s the quality of the band’s songs that fuels the engine, augmented by an extended family of collaborators. For example, Buck’s ‘Burning For You’ provided a light melodic counterpoint to the dark stomping boogie of ‘OD’d On Life Itself’ that sounds like a frantic jam between Billy Idol and Status Quo. 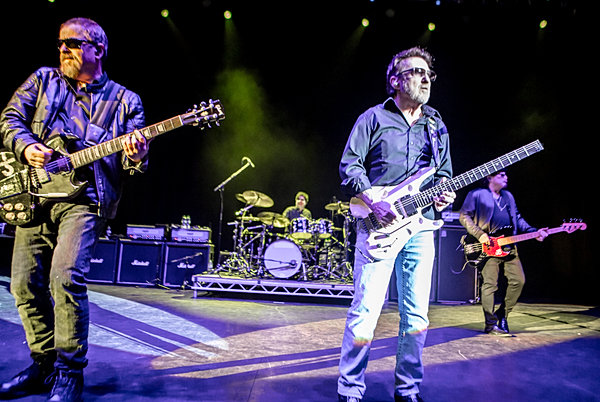 Half of the set is drawn from pre-Reaper days, yet later period songs meld perfectly, with the extended version of ‘Harvest Moon’ quite brilliant, with Jules Radino’s thunderous drums powering dazzling trade-off solos between Buck Dharma and fifteen year BÖC alumnus Richie Castellano.

Mystical and sci-fi themes abound in BÖC’s red and black catalogue. With the bands constantly rotating set-list, there’s no guarantee that favourites like ‘Veteran Of The Psychic Wars’ would make an appearance. However, the fabulous pairing of ‘ETI’ and ‘The Vigil’ more than compensated to satisfy the cosmophiles, with the heavy riffage of the former acting in beautiful contrast to the lush harmonies and eloquent lead guitar of the latter. 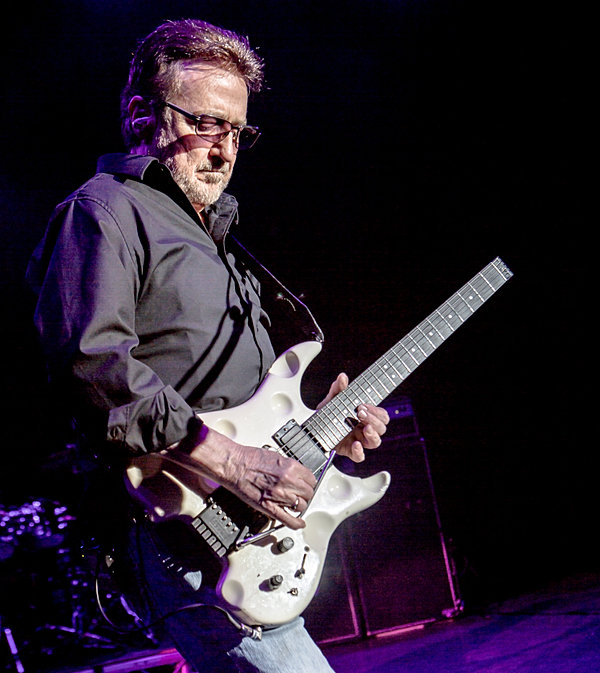 Best of all was ‘Then Came The Last Days Of May’ from the 1972 debut album, which has evolved over the years from a dreamy three-minute ballad into a twelve-minute epic that combines the melodic sensibility of ‘Stairway To Heaven’ with the incessant crescendo of ‘Freebird’. Yet again, Buck Dharma’s beautifully fluid and melodic lead guitar is a joy to behold. His signature headstock-free, cheese-themed guitar might be full of holes, but his playing could never be described thus.

For some reason, long-time live highlight ‘Astronomy’ is now rarely performed, so when Bloom powered the similar opening chords of ‘Flaming Telepaths’ (its ‘Secret Treaties’ little brother) the anticipation might have evaporated but the euphoria remained, with the closing refrain “and the jokes on you” rather ironic. 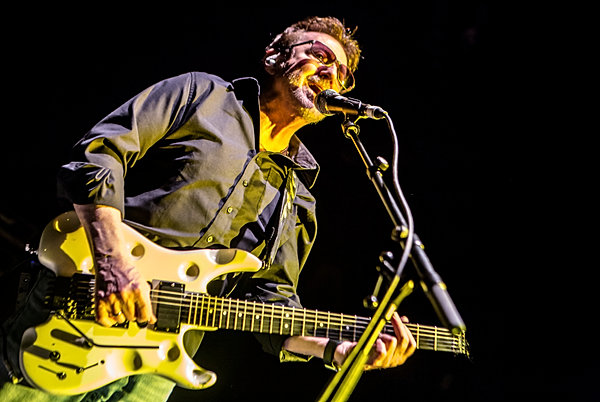 The formidable stomp of Godzilla and cowbell clang of ‘Don’t Fear The Reaper’ closed the set, in predictable style. The cheeky inclusion of the main riff from Zeppelin’s ‘Living, Loving Maid’ within that monstrous song and Buck’s lithe and fearsome guitar enhanced the familiar charm of those songs, although I would have preferred the keyboards to be lower in the mix.

For the encore, multi-instrumentalist Richie Castellano reproduced Allen Lanier’s complex baroque piano intro in rolling style, to usher in the Gothic wonder of ‘Joan Crawford’. The finale of ‘Hot Rails To Hell’ and ‘Cities On Flame With Rock And Roll’, which had featured in the set at BÖC’s first Hammersmith shows in 1975, provided a telling reminder of the enduring power of Blue Öyster Cult and the faith and devotion these agents of fortune continue to inspire in their music.

Before The Kiss, A Redcap

OD’d On Life Itself

Then Came The Last Days Of Ma

Cities On Flame With Rock And Roll 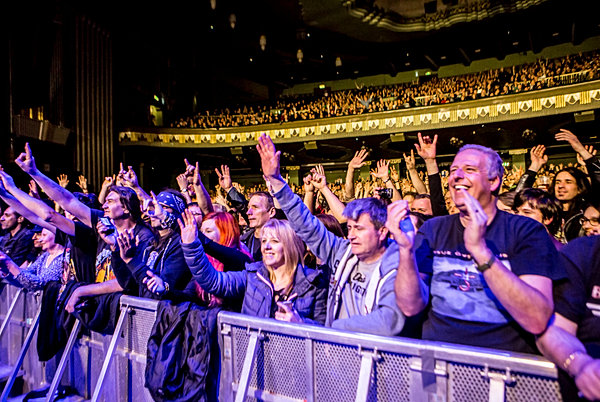