The Rock Den, in Hatfield, Hertfordshire, is a proper grassroots venue that, Covid-19 aside, has been hosting three bands, once a month, since 2013.

As live Heavy Metal music looks to kick-start again, MetalTalk editor Steve Ritchie caught up with Rock Den owner Dean Charles Archer as he and his team gear up for three shows in the first quarter of 2022. And £10 for three live bands and a cheap bar represents great value for money.

Hatfield was once a thriving Metal town. “Back in the ’80s, we had the Powerhouse,” Dean told MetalTalk, “a Heavy Metal disco held every Sunday at the Hatfield Polytechnic, now the University of Hertfordshire. The first band that played was, if I remember correctly, the Handsome Beasts.”

Bands would get 45 minutes between the two DJ sets. “There used to be 300 people there every Sunday, and it got that popular that everyone wanted to play,” Dean says. “Budgie, Raven, Janick Gers and White Spirit, Samson with Bruce, Gillen and Raven, who obviously left the UK and made it big in the States were a few of the bigger names who played there.”

Forced to move venues, Powerhouse finished at Forum Theatre, their final night in the ’90s featured Motörhead. Fast forward to 2013, and Dean hosted a rock charity night at Breaks Manor, a hall gifted to Hatfield by De Havilland in 1951. That event would lead to the formation of The Rock Den.

“There are a lot of us at The Rock Den that go back to the Powerhouse days,” Dean says, “and I started it as a thing to showcase up and coming bands. Sadly, we don’t seem to have the local talent that we had 20 or 30 years ago. But we’ve had bands from all over the UK, we’ve had bands in from Europe. We’ve even had one band coming from Canada, but because of lockdown, obviously, it never came off.”

Breaks Manor was part of rock and Metal history in Hatfield. “In the ’70s, they used to have prog and rock nights at Breaks Manor,” Dean says. “Lemmy played there when he was with Hawkwind. The Sweet and Thin Lizzy played there too.”

The first Rock Den lineup was headlined by Neuronspoiler, with Death Valley Knights and Sonic Scream supporting. “We did not have many people there that first night,” Dean says, “but word soon spread and nine years later, we are still going.”

Which is pretty good going, considering the number of venues that have closed. “Obviously, there are a lot of better venues than ours, bigger,” Dean says. “Places that are open most nights of the week. We just do it once a month, and we have a pretty good following.”

And a proper grassroots venue The Rock Den is. “We like to put on all sorts of unsigned bands generally,” Dean says. “That is almost all we have ever had, unsigned bands.”

At £10 a ticket for three bands and £3.50 for a beer, The Rock Den is certainly community-spirited. They operate an £8 a month subscription, and children under 16 have free entry when accompanied by an adult.

“The idea was to create a warm, friendly venue where the bands felt they were playing in their own living room and the people that come can enjoy it and talk to the bands.”

The Rock Den have improved their setup over the years. With a great stage, Dean organised cost-price guitar amps from Blackstar, was given a drum kit and secured a bass cabinet although there has been no Heavy Metal uke chords played yet, to our knowledge.

“Peter Yeomans and I built a drum riser because we always thought that the drummer sits in the back and nobody sees him. And since we’ve not had any gigs, myself and Peter have built some little boxes like stages now for the guitarists to stand on.”

A grant from a local company helped to buy a backdrop projector. “It adds to the atmosphere as well,” Dean says. This is all backed by The Rock Den front of house team. Harp covers sound and lights while young Reece is helping and learning the trade. “Then we have my lovely wife who does the bar, along with Gay and Tony, so we’re just a really happy, friendly team.”

With no camera restrictions, the venue is a welcoming place for budding photographers to develop their skills and build their portfolios.

Does Dean think The Rock Den generally has a good reputation for helping up and coming bands? “It seems to be,” Dean says. “I don’t know why, but a lot of bands can’t get gigs in other parts of the country. Sometimes it seems as soon as they have played The Rock Den, then for whatever reason, they can get gigs at venues that didn’t want to know them before. So, you know, it’s really nice that people say that about us. It’s nice, and it’s heartwarming.”

The Filth Hounds are a venue favourite, as are Kaine, who were the house band for a year. Sons Of Liberty, Black Whiskey, Forged In Black Theia and Max Pie were memorable.

“Max Pie has played twice,” Dean says. “The first time they came, they came with a band called Fire Force towards the end of a UK tour. The very first night they played was in Hull, and sadly they played to one person, but as the tour went on through the UK, the numbers started going. But their biggest crowd was when the two bands played at The Rock Den. Praying Mantis and Oliver/Dawsons Saxon have also played.

I also loved Isolation, I say, with the chainsaw. “I had a bit of a shock when I got an email from them,” Dean says, “and the picture that came with it. The singer and the rest of the band all painted out, and I thought this wasn’t what I would like. I played the EPK, and I thought that they were a total shock. I think they were really good fun. They will be back later this year.”

With the enforced covid break and getting people back in the mood for live music as we start up again, is Dean confident for the future? “I am,” he says. “When we came back after the first lockdown, we had a really good crowd. Sadly things didn’t last because people started getting ill again, and then everything was thrown up in turmoil. We had a few gigs. We had to cancel the Christmas one because too many people were ill. But January’s gig is looking very promising.”

January will find Molly Karloff, Raze and Blythe Road hitting the stage. “I have listened to all of the stuff that all three bands have done,” Dean says, “and very, very interesting.”

February find the refreshed Neverworld with Eyes Of Albion and The Droogs. “Neverworld are geat,” Dean says. “They’ve now got a female singer. Ben Colton left, and the band was sort of thrown into turmoil, but Gary, Michael and Jack have been working in the background trying to organise the band and get things that how they want. It’s looking promising for them as a band with a new direction.”

March finds Kaine and Born To Destruct, who have graced The Rock Den stage before, with Brazen Bull making their debut.

Dean describes his inspiration for selecting bands as based not just on their sound but if they have a stage presence too. “It’s often good to go through bands pages to see if they’ve got any live videos,” Dean says, “to see if they actually move. You have some bands that are really, really good, and we’ve had some in the past that get to The Rock Den, and it’s just like four cardboard cutouts on the stage. They don’t interact, you know?”

With their relaxed atmosphere, there is often banter between band and crowd. “Richard Frost, the frontman of Soldier, always loved coming to The Rock Den. It was their home from home because he loved the banter, but then wherever they used to play, a lot of us would go and see them. And that’s another thing that has always been nice because we go and see bands at other places. We’ve had a few good nights out.”

With thoughts slowly turning to spring and summer, there are hopes that The Rock Den summer festival will return. “I’m hoping we can do Den Fest again in August because it’s nice to reward the loyal subscribers,” Dean says. Rock Den subscribers have the festival included in their subscription. “We put six to eight bands on. We don’t charge subscribers more. It’s just to thank them for the support that they give us.”

The Rock Den is a real grassroots venue. A great place to make and meet friends and experience quality live music in a safe and more than reasonably priced venue.

Deans wish? “To try and get more people to go to live gigs, whether it’s at The Rock Den, Club 85, or Melbourne Rock Club. Anywhere. Keep grassroots music alive and support your local venue.”

For more information about The Rock Den, visit TheRockDen.com 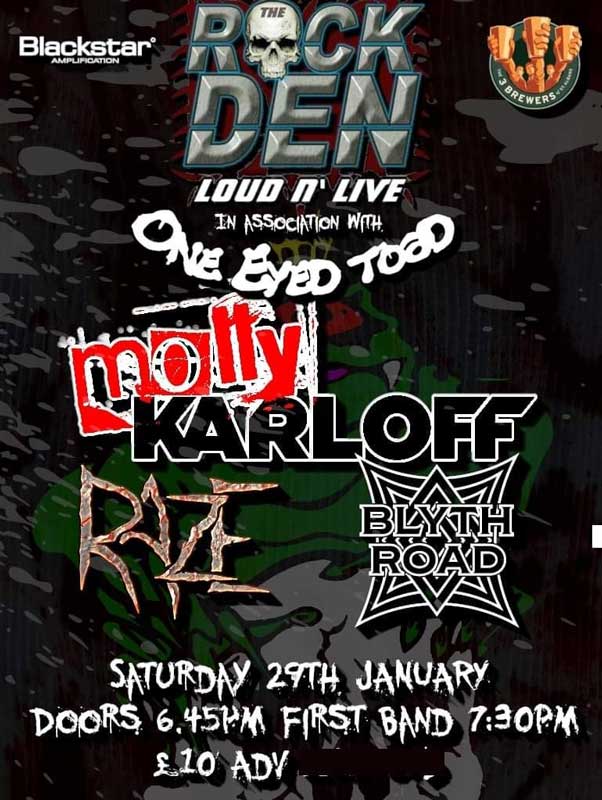 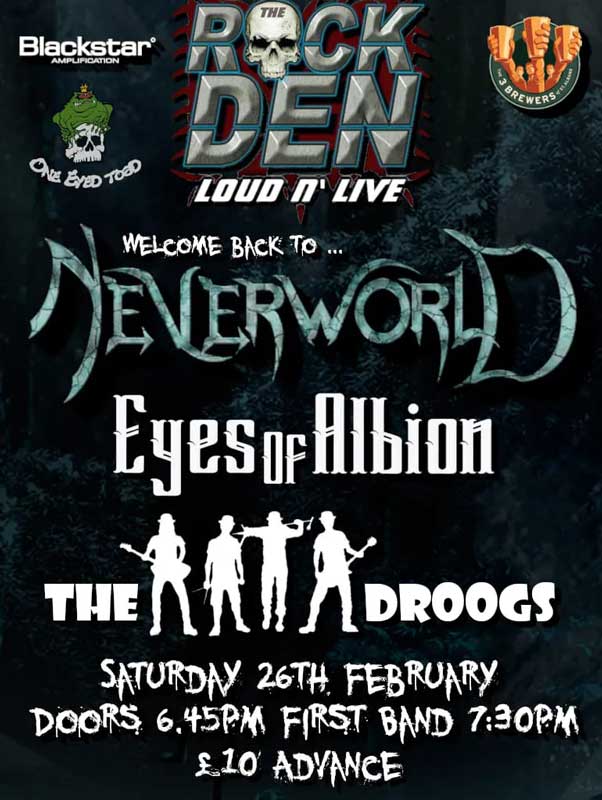 Neverworld, The Hilltop Droogs and Eyes Of Albion head to The Rock Den, Hatfield, in February 2022. 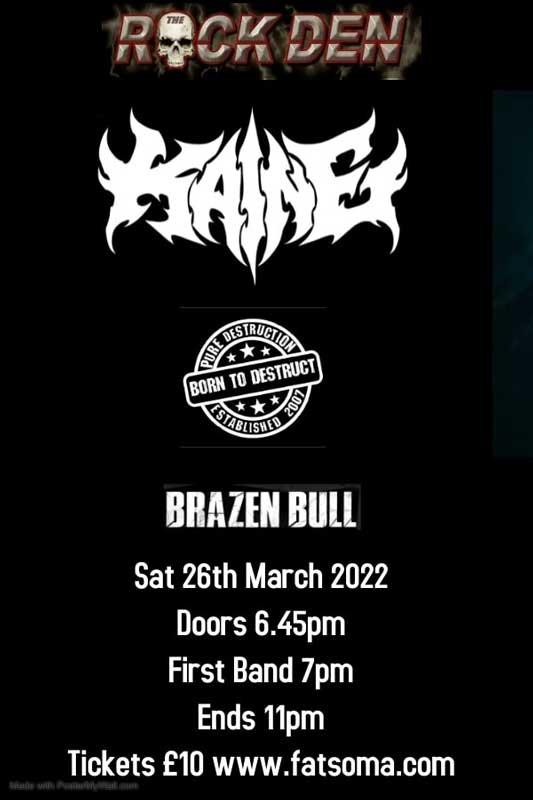 Kaine, Born To Destruct and Brazen Bull head to The Rock Den, Hatfield, in March 2022.

Previous article
Burned In Effigy / Bigger, better, Rex Mortem will leave you stunned and impressed
Next article
NFL Players Who Have A Secret Love For Metal Music