Robert Fripp, founder of the Prog Rock band King Crimson and his wife Toyah Wilcox will continue their series of gloriously weird YouTube videos this weekend by playing their version of a Jimi Hendrix song.

The husband and wife duo have been a viral success, with their recent version of Metallica’s ‘Enter The Sandman’ (sic) featuring Toyah performing and bouncing on an exercise bike, while her husband, Fripp, performs perfectly stony-faced. The video has had in excess of 4.5 million views on her YouTube channel.

The pair have embraced lockdown, by sharing their Sunday Lockdown Lunch videos since April last year, while they hold a weekly agony aunt session and Willcox also holds her own question and answer session.

In an interview with The Guardian, Toyah describes how she managed to get Robert to dance in tights and a tutu in an earlier episode.

She said it made him “f**king furious. He felt he was being mocked. But the response was so overwhelmingly positive, and now, six months down the line, he can see that it was quite an important thing to do, in that it became a shared experience with an audience that needed to be reminded of the beauty of human laughter. Since then I’ve not put him in such desperate situations.”

The pair are preparing a Jimi Hendrix piece for this weekend’s video. 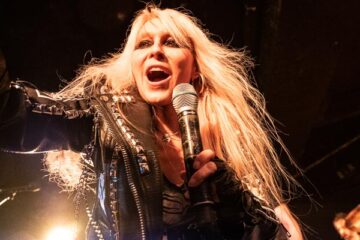