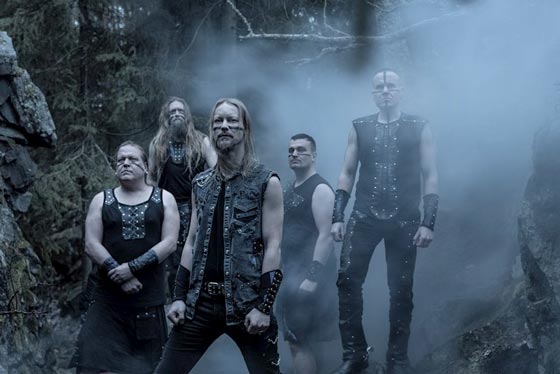 Ensiferum’s eighth studio album, ‘Thalassic’, is awash with amazing new songs, a vast soundscape and a new addition of calmer vocals alongside the familiar stormy roars.

In case you haven’t spotted the clues, or your ancient Greek is not up to scratch, then this album has a strong theme running throughout. Thalassic, meaning ‘of or relating to seas’, is a strong anchor to the rich and varied sounds running throughout this majestic album.

The first two tracks ‘Rum, Women, Victory’ and ‘Andromeda’ are full-throttle thundering Metal songs, very much in the vein of the Ensiferum trademark sound. They will have you headbanging and singing along in no time!

The furious tempo, lyrical story telling and folk elements, evoke scenes of being on a boat with sea-spray in your face as you shout out the choruses to the skies.

As alluded to, this is the first album with clean vocals sung by new recruit, Pekka Montin, who also provides keyboards on this latest voyage. Montin has, as Sami Hinkka told MetalTalk, “really raised the new songs to another level”. 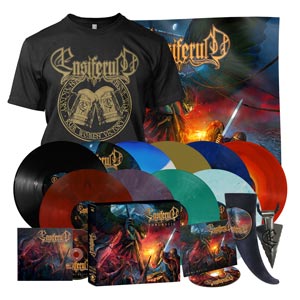 Sami Hinkka continued: “I think we managed to take another step ahead musically and we also utilized the best parts of our old sound. There are lots of Ensiferum’s trademarks: beautiful folkish melodies, ass-kicking riffs, a nice mix of different vocals and great singalong choruses”.

This really shows with the new dimension added to the song writing and is best exemplified by the powerful ‘Run from the Crushing Tide’ and the emotional ‘For Sirens’.

Both of these songs still sound like Ensiferum, but with a bigger and evolved sound which is a fresh blast of Metal awesomeness to be enjoyed.

Alongside the variety in sound, from the fast folky Metal jigs to more calmer moments, the theme of the album leads to rich story telling opportunities. For example, ‘Run from the Crushing Tide’ is a story of forbidden love, where the father of the girl uses his magic to summon the tide to kill them after they disobey him.

From the serious Andromeda, of famous Greek mythology, to the boisterous and humorous ‘Living the Dream’ featuring such joyful lyrics as “run naked through the fields” – this album has it all.

Special highlights include the last song of the Väinämöinen trilogy, ‘Cold Northland’, which started way back on their first album in 2001; as well as a very folky song ‘Merille Lähtevä’ which is sung entirely in Finnish.

‘Thalassic’ was recorded and produced in Petrax and Sonic Pump studios by Janne Joutsenniemi, who was involved on their albums Victory Songs (2007) and From Afar (2009).

Hinkka said: “We like to go to a studio when we have all the songs 99.9% ready so the producer’s main job is to kick our asses while we record. Of course Janne Joutsenniemi is a world-class producer, and we asked his opinion if we were doubting any details.

“It was really a pleasure to work with him again, and I think this was one of the most easy-going studio sessions I have ever been part of. We are extremely happy with the result.”

This album is full of delights and engages throughout.

A “must have” for the fans, but with the increased soundscape, so too should the audience and fans increase, as this is truly an epic piece of work.

The video for the first single, ‘Rum, Women, Victory’ can be viewed below and it features fan-submitted, sing-a-long content that the band collected after reaching out to their followers about recreating an at-home festival-like experience.

The band will also be chatting with fans in between the live performance and after the show.