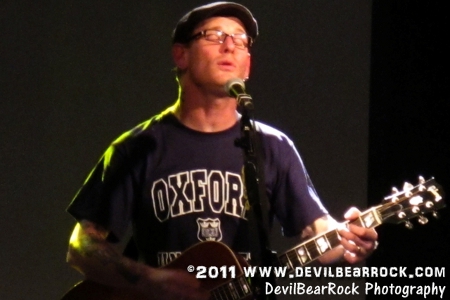 What exactly does an evening with Corey Taylor entail?

The host for the evening was the legendary Malcolm Dome, and as he said Corey’s name to a packed London Garage, Corey came on wearing an Oxford University shirt and flat cap. The stage was plain, no backdrop, no advertising of an irrelevant sponsor, nothing; just him, a microphone and acoustic guitar.

He started by explaining that the night would be in three parts; the first would be a reading from his book ‘The Seven Deadly Sins’ and we never got to hear what the other two parts were going to be, as the audience started heckling him. He took this on the chin and had a lot of fun with the crowd, even launching into an entertaining Arnie impression.

As he got the reading started, the crowd fell silent to hear from Chapter 7 – I’m With Envy. He even asked his sons, who were in the audience, to cover their ears for some parts. There is a whole rant about Grammies, and why there are hundreds of categories for all the other genres, but only one for Metal. Read the book to find his take on it, but it was met by a great reception from the audience. Corey then carried on reading the chapter in a very funny, but awful Christopher Walken impression.

We then moved on to the second part of the night, a Q&A session. Someone started by asking him whether he likes tea. He said he does, and takes it with no cream or sugar, but prefers coffee, saying “Do you think I could be this fucked up if I didn’t drink lots of coffee?” 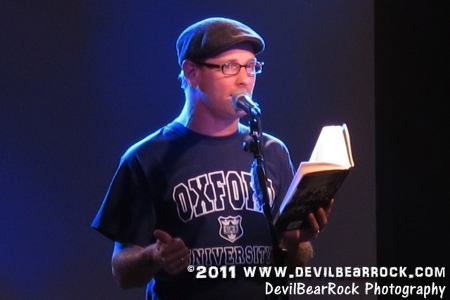 When asked about things he wanted to achieve in the future, he said he’d like to write more if the book goes well, maybe work on a solo album and even write a movie. If he does, do not expect any romance or comedy; it would be something that would mess with your head. He suggested something along the lines of ‘Seven’ meets the ‘Texas Chain Saw Massacre’.

The banter with the crowd continued throughout the session, and as he launched into yet another impression, this time Tom Selleck complete with fake moustache, everyone was sent into hysterics. Maybe he should add stand up comedy to his to-do list.

One fan asked the inevitable: Download vs. Sonisphere. His response was that it wasn’t a fair question, because Paul Gray played Download, and Sonisphere was dedicated to his honour. He went on to admit that he hasn’t cried about Paul for a long time, but that the two-minute silence bought it all back to him.

Some other things he revealed in the Q&A session is that he has his own take on philosophy because his mentality doesn’t fit with the norm, that there’s a live Stone Sour DVD (recorded in Brighton) on it’s way and that his favourite tattoo is his new Paul Gray one. He also confirmed that the Slipknot tour has been a step towards their future, and said IF they did release a new album it would still be a couple of years away. Although he delighted the fans by saying a tour would come first. 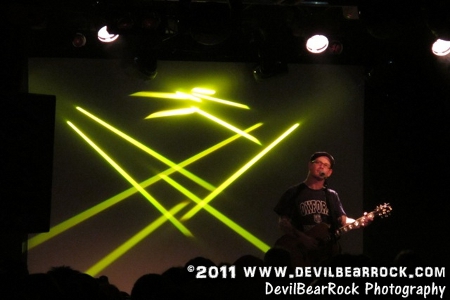 When someone asked him what his three favourite songs were, he couldn’t decide so gave us his favourite three Iron Maiden songs: ‘Rime Of The Ancient Mariner’, ‘Aces High’ and ‘Two Minutes to Midnight’.

Towards the end a fan shouted out, “You’re a legend” and his response was; “This legend has sweat running down the crack of his ass”. A very humble ending to the session was him saying that he “wants people to remember him for being honest”.

And so time for the final part of the evening, an acoustic set with requests from the audience, kicking off with ‘Wicked Games’, which silenced everyone. He included a variety of excerpts from songs, including ‘Ring of Fire’, ‘Wild Horses’, ‘Welcome Home (Sanitarium)’, ‘Wanted Dead Or Alive’, and even a bit of Skid Row’s ‘I Remember You’. His comedy continued with a Jack Black-esque cover of ‘Every Rose Has It’s Thorn’ and a bunch of advertising jingles, including the Juicy Fruit advert.

At no point in my life did I think I’d ever be standing watching the vocalist of Slipknot singing the theme to Scooby Doo. Nor did I expect to hear his Xmas single, in the middle of July, but he said it’s the first time he’s played it live and it went down a storm. And yes, he did confirm ‘Thanks Simon’ at the end was directed to Simon Cowell.

Other highlights were the Stone Sour songs ‘Hesitate’, ‘Through Glass’ and ‘Bother’, which the crowd sang along so loudly to that he actually stopped playing at one point and looked in as much awe at us as we were at him.

He had a request from his wife for Alice In Chains’ ‘Nutshell’, which gave me goose bumps, although a lot of the audience didn’t seem to know it, but the absolute icing on the cake was him ending with the Foo Fighters epic ballad ‘Everlong’.

At all times in his career, Corey has been very honest and said that the real thing that matters to him are the fans. Not journalists, magazines, TV, radio, winning awards, but the people that actually go out and buy his music. Anytime the audience heckled him, he lapped it up, even saying at one point “I am such a whore for you”, and as a final salute to his fans everyone was given a signed copy of the book as they left this rare and at times inspirational night.

Out now ‘The Seven Deadly Sins’ is a book where Corey basically takes the piss out of organised religion, interlaced with stories about his life. A very innovative idea, which makes for a great read.