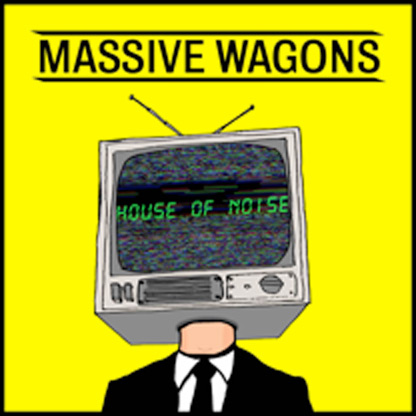 Massive Wagons new album ‘House of Noise’ has big shoes to fill after the 2018 release ‘Full Nelson’ crashed into the UK charts top twenty at an impressive sixteenth place. Their first album for Earache Records was a big step up from their previous three albums in terms of song writing and production, and the Lancaster lads have upped their game once again with their latest offering.

‘House Of Noise’ is due for release on 17 July and if you are already a Wagons fan then you have probably already pre-ordered one of the several lovely limited editions of this album, and on the off chance you are not already a fan, then you will be after listening to this.

The first three songs may be familiar to some, having already had video releases, and album opener ‘In it Together’ sees the band In top form right from the start.

Next up is ‘Bangin in Your Stereo’ which has singer Baz Mills spitting “I’m sick to death of your whinging voice” in response to constant noise complaints – fair comment I would say.

As with most Massive Wagons songs, title track ‘House of Noise’ is another anthem, albeit one with a difference and sagacious front-man Baz comments: “It was the very last track written for the album. We wrote half of it over the Christmas holiday and the other half in the studio.

“In the past we’ve taken an album name from a song. This time we wrote a song after the album name oddly, but it was great to write it in the studio, something we’ve never really had time to do before. It was totally fresh to us right up until laying down the guide tracks, developing all the time, it was an exciting song to write.

“Myself and Adam talked for years about writing a track with a kind of dance vibe, the dance music beat, and especially the early 90’s dance tunes were all big stand out tracks, huge singles some of them, and we wanted to kind of try and capture a piece of that.

“The track itself is about the sometimes chaotic scenes unfolding in ones mind, the noise, the thoughts, paranoia, anything really. We’ve all been there at some point. As you go through life things change, you have to get your head around a lot of issues: age, relationships, stress, time marching forward.

“It’s a song about these things really, we are really excited about the track. It’s like nothing we’ve done before and something we’ve wanted to do for ages”.

‘Freak City’ keeps the tempo chugging along nicely with it’s “Hey Hey” chants and with the line “the future is so bright” they’ve hit the nail firmly on the head, even if Mills’ head is “a disco full of people I don’t like”.

‘Hero’ has already found itself firmly installed in the bands set list and to these ears has a great Rose Tattoo feel to it. Bringing the tempo down for a while with a massive dirty blues groove and scintillating fret work from Adam Thistlewhaite and Stevie Holl, whilst Mills’ phrasing is not too far removed from Angry Anderson at his best. It’s a yes from me.

‘Professional Creep’ starts off all guitars and drums with rhythm section Alex Thistlewhaite and Bowz keeping the Wagon firmly on the road and sees Mills at his vext best, with bizarre angry lyrics like “and you look like Meryl Streep, you’re a professional male creep”, “but you can’t vaccinate against being an asshole” and “all i ever wanted was to punch you in the face”.

This is testosterone busting stuff.

‘Pressure’ is a frantic slab of Pop Punk, and why the hell not, the supercharged hard hitting lyrics pretty much saying it all.

‘The Curry Song’ with its comical lyrics, catchy riff and melodic singalong chorus, has probably the ultimate crowd participation part and I for one can’t wait to sing back the immortal words “naan” and “josh” You’ll get it when you hear it.

Do these guys actually exist and have the names been changed to save the not so innocent, we need to know. Another glorious song destined to become a crowd favourite.

‘Sad, Sad Song’ opens up with a ‘Bark at the Moon’ riff that quickly disperses into a poptastic anthemic number that is a real earworm, with some great guitars including a beautifully crafted solo and a chorus that once again will have a live crowd bouncing. This song has more hooks than a fishermans box.

The next song is another tongue in cheek charmer about the man who left the show early, the title of which, undoubtably, has its place in the next updated version of the urban dictionary assured. ‘Hallescrewya’ slots nicely into it’s penultimate position on the album.

Now, if you are going to write an eight minute ballad as your album exit strategy, then you better make it a damn good one and that is exactly what they’ve done with ‘Matter of Time’, a beautifully crafted epic that has everything.

This is an album written with the fans in mind and it is a tried and tested formula that has served the Wagons so well on previous albums, though this time the Wagon has a brand new gearbox that has shifted up a gear.

The bands natural habitat is on stage and these songs are littered with crowd participation parts that are going to go down a storm live.

Well there you have it, a collection of lockdown busting songs and on the opening track, Mills sang “we’ll give them some big time Rock ‘N Roll” and that’s exactly what they delivered right the way through this album of the year contender.

Massive Wagons have already had a taste of arena stages, supporting the likes of Lynyrd Skynyrd and Status Quo and who would bet against them headlining those stages a few years down the line.

Certainly not I, or maybe even Rick the pen for that matter.