Deadland Ritual is the brainchild of Black Sabbath bassist Geezer Butler and also features former Guns N’ Roses and Velvet Revolver drummer Matt Sorum, long-time Billy Idol guitarist Steve Stevens and Franky Perez on vocals. They have just released their second single, ‘Broken And Bruised’, and on the eve of their recent performance at Download Festival, Geezer Butler and Matt Sorum sat down with MetalTalk so talk over the origins of the band, as well as their future plans.

Download was only Deadland Ritual’s seventh show as a band but Matt Sorum is feeling good about it.

“Yeah, it’s been fun! We’re only doing a bit of a shorter set here today but it’s been really good so far,” before revealing how Deadland Ritual formed.

“I read an article that said Geezer was done with Sabbath, that Black Sabbath was finally finishing and he wasn’t sure what he was going to do next, so I took that as a hint. I mean we’ve played together a couple of times back in LA and I obviously love playing with him – he’s one of my all time favourite bass players.

“Then we saw Steve Stevens and Franky Perez around and I basically said we should think about writing something that Geezer might be into, so we came up with this song that’s out now, ‘Broken And Bruised’. So I emailed him and he replied, which was great [laughs]. So here we are.”

However, Geezer had absolutely no plans to go out and do something else musical after Black Sabbath ended.

“No, I didn’t want to do anything. I was totally retired, then after about a year of travelling and watching TV and reading books I just got a bit bored. So when Matt sent me the demo of ‘Broken And Bruised’ I really liked what I was hearing.

“Initially he asked me to write some lyrics for it but there were no vocals and I don’t write like that. So I said I just want to play bass. Then later I met with Franky and Steve and we all got on so well together it just went from there.”

“It was really organic, I mean we didn’t have any intentions. We just ended up with the right players for a band. It was sonically what we wanted and I think Geezer was the point of reference for that. We just wanted a richer sound.”

The setlist is a really nice mix of new and old songs from Geezer’s and Matt’s previous bands and the very first Deadland Ritual originals, as Geezer explains.

“Well we only have seven songs written so far and you can’t just go out and play seven songs the fans have never heard, so we thought the best way to put them across was to mix it up with a Black Sabbath Song or a Velvet Revolver song then an original.”

Matt elaborates: “That’s really tough for the fans and we want to entertain them too. They should enjoy it because we haven’t even got a record yet but we’ve been getting a really great response from the fans about the new material so that gives us a kind of marker as to what’s working and what’s not for when we go to record the album. It’s almost old school, like being in a brand new band on the street.

“It makes me feel like a kid again. I feel re-energized. We just go out there, do our best and try to prove a point like when we were young and play the best rock’n’roll we can.”

“Well we would like to be headlining next year if that’s what you mean [laughs], but coming out with a new band making new music is a big thing.”

Once this current June European festival run is completed, Deadland Ritual return to America to play Louder Than Life and Aftershock festivals and we can then look forward to the debut album, as Matt reveals:

“Well Greg Fidelman will produce it – he produced Metallica and Slipknot’s last release and worked with Sabbath on their last album as well. He was just great to work with.”

And Geezer is very clear on the ‘supergroup’ label some have attached to Deadland Ritual.

“I don’t like it. It’s a stupid term. It’s just four guys from other bands getting together to make the music they want to make, not some silly tag.”

And with that, Matt concludes: “For me, as a drummer and someone who grew up listening to Black Sabbath and Deep Purple and that era of rock, it just allows me to play more. It’s just fun to play and jamming with Geezer is pretty cool.

“We want to record some more songs, then we have some festivals in the US then who knows. Just take it one step a time and let it grow organically.” 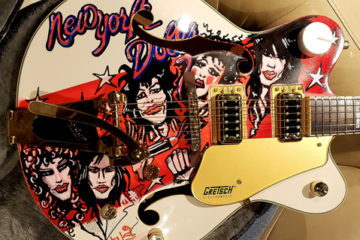